A bunch of nocoiners are doing a Crypto Policy Symposium, to run on September 5 and 6. Amy’s interviewed Stephen Diehl for a blog post coming out shortly! [website] 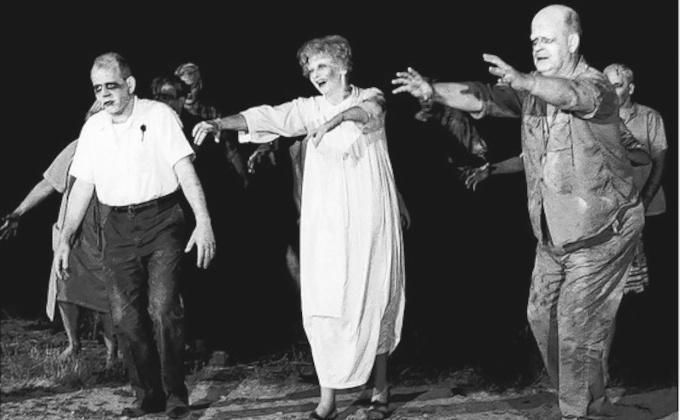 Back in 2012, Trendon Shavers (Pirateat40) ran a Ponzi scheme on the BitcoinTalk boards called Bitcoin Savings and Trust (BTCST). At one point, BTCST held 7% of all bitcoins.

Pirate’s Ponzi had a pile of pass-through funds — which invested only in BTCST. There were even funds insuring against the collapse of BTCST … who put the insurance premiums into BTCST. (See Attack, chapter 4.)

History repeats, but only the stupid stuff. So in 2022, it looks like everyone in “CeFi” — centralized firms offering exposure to the DeFi markets — put a lot of money into Three Arrows Capital (3AC), which put all its money into Terraform Labs’ Anchor, which collapsed with UST and luna in May.

Here’s a snapshot attestation — not an audit — of the state of crypto contagion as of this past week by Ape Digest. There’s a current version that’s being kept updated, which we hope to see released to the public soon. [Ape Digest spreadsheet; Twitter thread]

Voyager Digital issued a notice of default on two loans it had made to 3AC — for 15,250 BTC and for $350 million in USDC. 3AC was ordered into liquidation by the Commercial Court of the British Virgin Islands on 27 June, and a receiver has apparently been appointed. The next question is if there’s anything left. [Press release; Vice; Bloomberg; Sky News]

Update: it wasn’t Voyager who initiated the liquidation of 3AC, it was crypto futures exchange Deribit. Teneo has been appointed as liquidator. [The Block]

Korean fintech Delio borrowed $600 million of BTC, ETH and USDT from 3AC on 7 June — just before 3AC went bust. Delio says it had no exposure to 3AC’s collapse. It’s not clear what collateral Delio put up to do the deal. [Twitter; Tokenpost, in Korean; Twitter]

Research firm FSInsight says that 3AC  ran a “Madoff-style Ponzi scheme,” paying early investors from later ones — and that that was their entire business model. FSInsight says that Su Zhu and Kyle Davies from 3AC used their reputations to “recklessly borrow from just about every institutional lender in the business.” [Coindesk]

Unlike many of the crypto lenders and hedge funds, Voyager Digital is publicly listed on the Toronto exchange. Their stock plummeted 60% to $0.50 last week on news of their exposure to 3AC, and a negative analyst report. Voyager is down 95% since last November. [FT, paywalled, archive]

Voyager says it’s already maxed out the credit line it got from Sam Bankman-Fried’s Alameda on June 22 — $200 million in cash and USDC and 1,500 BTC. The terms say no more than $75 million can be drawn in a rolling 30-day period, and Voyager’s already hit that. [Press release; Tweet]

Voyager also invested in Axie Infinity, Solana SOL, Celsius and luna, all of which have since crashed.

These crypto traders look a lot like shadow banks. In this thread, Patrick McKenzie describes the collapse of Voyager if you consider it as a bank. “Here, Voyager has (currently) sustained losses equal to more than half of liabilities to customers from one single loan going bad.” [Twitter thread]

There are completely unconfirmed reports that Alex Mashinsky, CEO of Celsius, has been attempting to skip the US, but keeps being stopped at the airport. These reports are sufficiently widespread that we need to note that so far, there’s zero evidence that this even happened.

FTX looked into a rescue package for Celsius — but backed out after looking at Celsius’ finances and seeing a $2 billion hole. So there are abysses that even Sam Bankman-Fried won’t take a great arcing swan dive into. [The Block]

There are claims that Goldman Sachs is gathering venture funds to buy Celsius Network’s assets, if any, cheap — “according to two people familiar with the matter.” This doesn’t make sense — Celsius’ assets are well below their known liabilities to their depositors. If Goldman buys the assets before bankruptcy, the assets will almost certainly be clawed back. After bankruptcy, the creditors are unlikely to agree to selling the assets cheap. We suspect the rumors are wishful thinking from the Celsius camp. [Coindesk]

Dirty Bubble Media explains to Coffeezilla how and why Celsius fell apart. [Youtube]

Dirty Bubble wrote up a new post: “Hold for Thee, Not for Me,” documenting the network of wallets that Mashinsky used to dump millions of CEL tokens, netting over $40 million in proceeds. [Dirty Bubble]

FTX is rumored to be buying BlockFi for $25 million — a fire-sale price. Zac Prince from BlockFi denies they’re being bought for $25 million. [CNBC; Twitter]

Anthony Pompliano and Mark Yusko’s Morgan Creek Digital tried to put together an alternative rescue package for BlockFi. Why? FTX’s $250 million credit line stood to wipe out BlockFi shareholders, including Morgan Creek. Note that when a real bank goes bust, depositors get their money before shareholders. [Coindesk]

Three days after the FTX bailout, BlockFi increased the interest it pays to customers — and the highest interest rate is for non-US Tether! They could do this “thanks to effective risk management, decreasing market competition, and changing macroeconomic yield environment.” It’s totally not that BlockFi is running out of money, and trying to lure in fresh cash from new investors to pay off the old investors. [Twitter; blog post; archive]

Other legitimate trading firms that are definitely stable going concerns

Nexo is so upset at being called out for its 18% Ponzi-like interest rates that it’s posted a cease and desist letter … as a blog post. We’re told that Nexo has been sending the link to its critics on Twitter too. This is not quite how defamation law works. [Nexo Blog; archive]

Short-sellers are ramping up bets against tether. We’re still entirely unclear on how they’re shorting USDT, or what the conditions for payout are. [WSJ]

Genesis Trading, owned by Digital Currency Group, was also deep in 3AC and Babel: “We mitigated our losses with a large counterparty who failed to meet a margin call to us.” Were any of these guys not just running a Pirate Pass-Through? Genesis’ losses are on the order of “a few hundred million dollars.” Genesis has apparently been pulling in liquidity from anywhere it can. DCG’s backing means Genesis is unlikely to go under. [CoinDesk]

Crypto lender Maple Finance warns that “There may be instances where there is insufficient cash in pools.” Their customers will have to wait on borrower repayments. Maple assures its customers that everything will be fine. [Blockworks; Maple, archive]

$100 million South African fund Invictus Capital is in trouble, and specifically cites trouble with Celsius and UST — they stopped withdrawals on May 23 after all their UST evaporated. Invictus is attempting to “re-organize.” [Offshore Alert; Invictus, PDF, archive]

Dirty Bubble says that crypto lender Hodlnaut — no link to Hodlonaut from crypto Twitter — may also have experienced a massive undisclosed loss from the collapse of UST. [Dirty Bubble]

Business Insider writes about the retail customers who fell victim to Y Combinator-funded Ponzi pass-through fund Stablegains — who lied that investments were distributed across multiple stablecoins, but just put all the money into Terraform’s Anchor. No comment as yet from Y Combinator or Paul Graham on what they were thinking in backing a straight-up Ponzi. [Business Insider]

USDC is the currency of DeFi. It’s rather closer to being actual dollars than tethers are. If you believe Circle and Coinbase, anyway.

… Coinbase Exchange users will be able to deposit USD or USDC and their account will be automatically credited on a 1:1 basis with USD. The unified USD balance can be used to trade on USD order books or withdrawn to either USD or USDC.

We’ve replaced your regular dollars with dark sparkling Folger’s crystals — to see if anyone will notice. [YouTube]

Circle claims USDC is 100% backed by dollars — but USDC are not, in fact, dollars. They’re unaudited crypto tokens issued by a shadow bank. USDC are “dollars” right up until there’s trouble at Circle or Coinbase.

Individuals can no longer redeem USDC directly with Circle, except old legacy accounts — you can only cash out by selling the USDC on a crypto exchange.

Why is Coinbase trying to pretend that USDC are US dollars? Will the USDC printing press go nuts next time the bitcoin price needs pumping?

If we can believe Circle, then tens of billions of actual dollars flowed into the crypto economy over the past year to buy USDC — but not to buy bitcoins or ether with actual dollars, meaning that miners were borrowing cash to pay their bills. We have our doubts.

The next round of noteworthy collapses will be crypto exchanges. As we detailed last newsletter, a lot of exchanges look very like they’ve been dabbling in the DeFi markets with customer funds.

Others are just running out of incoming actual money. Bitpanda just laid off several hundred employees, a third of its staff. [Bitpanda blog]

There are some pension funds exposed to crypto — CDPQ in Quebec bought into Celsius, and the Ontario Teachers’ Pension Plan invested in FTX last year. (OTPP apparently get shirty if you ask too many questions about this.)