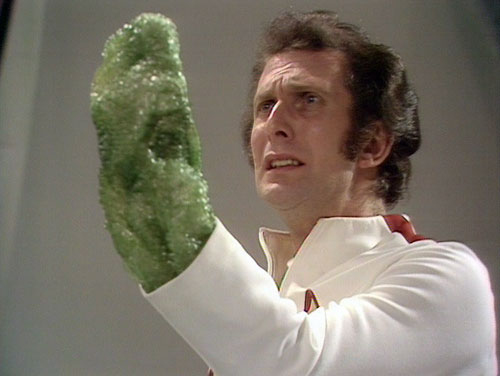 Doctor Who fans across the UK were horrified yesterday to see the word “blockchain” within a mile of their favourite telly sci-fi — when Reality Gaming Group put out a press release announcing Doctor Who: Worlds Apart, a collectible trading card game … on the blockchain! [press release; Worlds Apart]

The plan is to do the “cards” as non-fungible ERC-721 tokens — though it’s not clear if these will be run on the public Ethereum blockchain, or on a private instance of Ethereum.

Users will see these things as expensive pixels on their phones.

Reality has been trying to do blockchain games based on non-fungible tokens for a while. Their first game was Reality Clash — “Think Pokémon GO meets Call of Duty.” (Sounds like an 89-chapter crossover fanfic.) [Reality]

You’d first think BBC Worldwide (the BBC’s commercial arm) were just getting sloppy with the brand licensing. But it turns out the BBC end is being run by a guy called John Kavanagh, a long-time blockchain fan, who started at BBC Studios in late 2019.  He’s (apparently still) VP of Gaming at Ukrainian blockchain studio Innovecs since 2018, and speaks at blockchain conferences. [LinkedIn; Innovecs press release, 2018; Blockchain Conferences]

So I’m suspecting Kavanagh went looking for someone who’d do something, uh, blockchainy.

So these virtual Doctor Who cards will launch in October … and be quietly forgotten soon after.

I’m finding no evidence that real-world paying end users — outside crypto gamblers buying cat pictures — get into digital collectibles. Every word I can find is frantic marketers trying to sell companies on “digital collectibles” as the hottest new thing … and all using the same jargon, for the past few years, with a notable dearth of products that took off with the general public.

“Digital collectibles” seem to be made entirely of wishful thinking — but, welcome to blockchain.

DeFi continues to DeFi. YAM was launched on Tuesday 11 August. YAM’s magical trick was rebases, where more YAM governance tokens were minted to compensate when the price went up, and tokens were burnt when it went down — same as Ampleforth.

YAM was experimental and unaudited. But the FOMO brigade went nuts on it anyway, putting in $76 million of cryptos in the first hour, [The Block] and $585 million by 04:30 UTC on Thursday 13 August — when a bug was found that meant the governance functions couldn’t work any more.

“Specifically, the rebase bug led to the minting of decillions of YAM to the governance vault. This YAM exists and does not vote. This means that no votes can pass, because they can never reach a quorum.” [Twitter]

YAM has been shut down, about $750,000 in tokens have been lost, and locked funds have been unlocked. Everyone’s going “LOL it was unaudited” — but smart contracts are conceptually stupid by nature, and auditing isn’t magical security dust. [The Block; Medium; CoinDesk; CoinDesk]

“Code is Law” was also the founding principle of Ethereum Classic — so that the DAO disaster of 2016 would be preserved forever on the Ethereum (Classic) blockchain. But the code for the proof-of-work consensus mechanism apparently isn’t law in quite the same sense — Ethereum Classic Labs has engaged law firm Kobre & Kim and CipherTrace to find the people who mounted not one, but two 51% attacks against Ethereum Classic a couple of weeks ago. Trustless! [Decrypt]

As the smell of smoke could be felt for miles, nothing better than offering reassurance. @davidgerard @ahcastor @mdudas pic.twitter.com/Pv2R3Rz4pw

Crypto derivatives gambling den BitMEX will start doing full Know-Your-Customer from 28 August! BitMEX founder Arthur Hayes says: “The game has changed, and so have we; keep a stiff upper lip.” How far will high-rollers go to keep gambling at their favourite casino? Remember that “Institutional Investor” means “Crypto Hedge Fund,” which means HODLer In A Tie with a Chromebook Gambling At BitMEX. [Twitter; BitMEX blog]

Binance US shut for several hours on Friday 7 August, for some reason that totally wasn’t yet another hack. [Decrypt]

Coinbase has left crypto lobbying group the Blockchain Association — apparently outraged that a scurrilous organisation like Binance US was allowed to join. We don’t want crypto looking like some bunch of grifters. [Twitter; CoinDesk]

MicroStrategy, a business intelligence software firm that’s been doing very well for itself, found it had way too much cash on hand. So it gave $250 million back to the shareholders, and spent $250 million on … bitcoins! That’s 21,454 BTC, at $11,652 each. [MicroStrategy]

Is this institutional adoption? Matt Levine reveals how this happened — the CEO, Michael Saylor, owns 72% of MicroStrategy’s voting shares, and can do whatever the hell he likes and not get fired. And he likes Bitcoin. The press release has a long stretch where Saylor recites standard Bitcoin maximalist talking points. It’s not clear this is a green light for other large corporations to get into Bitcoin. [Bloomberg]

The SEC has settled with the $5 million Boon Coins ICO, which ran from November 2017 to January 2018. Boon Tech happened to lie a lot in the course of promoting the ICO. Boon Tech and its CEO Rajesh Pavithran have to disgorge the $5 million ICO takings with $600,000 interest and pay a $150,000 fine. Pavithran is barred from serving as a company officer or director. [Press release; order, PDF]

Phoenix Thoroughbreds could be a brilliant business with an innovative new model nobody else is smart enough to understand … or it could be a crypto money laundering racket, involving OneCoin. [Racing Post]

The Missing Cryptoqueen has a ninth episode, just uploaded! This podcast series, about the OneCoin scam, is amazing. [BBC Sounds]

ICO fan Hester Peirce has been reconfirmed as an SEC commissioner until June 2025. If Jay Clayton takes up the job of US Attorney for the Southern District of New York, Peirce is next in line to be Chair of the SEC. [Twitter]

Archive.is — for when you need an archive site that ignores robots.txt — got $1500 in BAT tokens donated by grateful users who accessed the site with the Brave web browser. Brave won’t pay out, because, whoops! Russia is no longer included in the BAT programme. So sorry. Brave still has the $1500, of course. The Brave browser is now barred from archive.is. [archive.today blog]

Browse in absolute privacy with Tor! Except for the minor detail that one in four Tor nodes is compromised and manipulating traffic. “They are primarily after cryptocurrency related websites — namely multiple bitcoin mixer services. They replaced bitcoin addresses in HTTP traffic to redirect transactions to their wallets instead of the user provided bitcoin address.” It turns out that a pile of coin mixers do in fact use plain-text HTTP instead of secure HTTPS — because cryptocurrency fans are blithering incompetents at practical security. [Medium]

Blockchain grifters are trying to get putting COVID-19 test results on a blockchain into California law. The ACLU and EFF are opposing. This appears to be fallout from California’s Blockchain Working Group. [EFF]

How much ether is in circulation? Well now, that’s a very nuanced question. [Twitter, archive]

Squiddycoin! Goldman Sachs has hired the head of JPMCoin, JP Morgan’s stablecoin effort of last year — which went about as far as this will. [CoinDesk]

Richard Stallman talks about GNU Taler, and its suitability for a not-absolute-but-some-privacy central bank digital currency. I’ve been meaning to write up Taler for about three years now. [CoinTelegraph]

Normal people have noticed that neither Ripple the company nor XRP the coin is actually useful for anything. [FT, paywalled]

/r/buttcoin looks at the BitcoinTalk altcoin forum as of 2020. It’s still wild. [Reddit]

Bennett Tomlin, Kyle Gibson and Cas Piancey went on a stream with Daniel Jones (Nixops) to talk about Tether and so forth. [YouTube]

Remember the Bitcoin Mining Accident era of 2011, and the miner who got heatstroke from falling asleep in a room with his mining rig? I used it in chapter 5 of the book. “Chubbyemu” is a doctor, who had a similar case in 2012, and has made a dramatisation of it. [YouTube]

Peak token?
I just created a test ERC20 on #Ethereum mainnet, created a test Uniswap liquidity pool for said token… and some bot(?) bought a bunch of the test tokens from the just-created DEX.

The cryptolawyer bar exam is online this year, as it always has been.

It's here on Twitter and the exam is you just tweet about crypto nonstop until everyone assumes you're a cryptolawyer, which is a thing that doesn't exist anyway.

One Comment on “News: Doctor Who and the Curse of the Fatal Blockchain, the YAM DeFi disaster, BitMEX goes KYC”