El Salvador is going to issue a $1 billion bond, with the help of Blockstream and iFinex. And Bukele’s going to build a special economic zone charter city running on Bitcoin.

This bond has long been part of the plan for Bitcoin in El Salvador — though it’s also Bukele throwing dead cats on the table as a distraction. Or perhaps dead goats, given the Chivo network’s failure so far.

They definitely didn’t skimp on the production budget for Bukele’s entrance — Metaverse avatar and all pic.twitter.com/VwspEggmLe

This video intro explains everything — Bukele is Poochie!

The International Monetary Fund said on Thursday 18 November that its current discussions with El Salvador are not, in fact, about lending the country the $1 billion that Bukele was desperately after — “this is an article IV discussion and the dialogue would be around policies that could, potentially, underpin an IMF program with El Salvador,” said Gerry Rice from the IMF. [Reuters]

So Bukele is going Bitcoin — and issuing $1 billion of “volcano bonds,” as tokens on the Liquid Network, a proprietary permissioned blockchain run by Blockstream. [Blockstream]

(The leaked Chivo Network infrastructure diagram from August mentions “Liquid” via Athena, Chivo’s Bitcoin ATM supplier — perhaps that was in anticipation of this bond plan.)

Blockstream proposed the bonds to Bukele in July. Samson Mow at Blockstream blogged about the plan today. The proposal is to issue ten-year bonds, paying 6.5%. After a five-year lockup, El Salvador will start selling its bitcoins to pay an additional dividend. Buyers can buy in with as little as $100. [Bloomberg; blog post; Bloomberg]

Mow says all the numbers work out if BTC hits $1 million within five years.

The really good bit is that the new bond is being done via iFinex, in their new guise of Bitfinex Securities. Yes, it’s the Tether crew — the same group of respectable businessmen who got fined millions this year by New York and the CFTC for lying and lying and lying about the money. I wonder if US citizens will be able to go anywhere near these bonds.

El Salvador doesn’t have laws as yet to allow tokenised securities on a blockchain. But iFinex is helping draft them!

That is: iFinex is helping El Salvador write the tokenised securities law that iFinex will be the first beneficiary of. 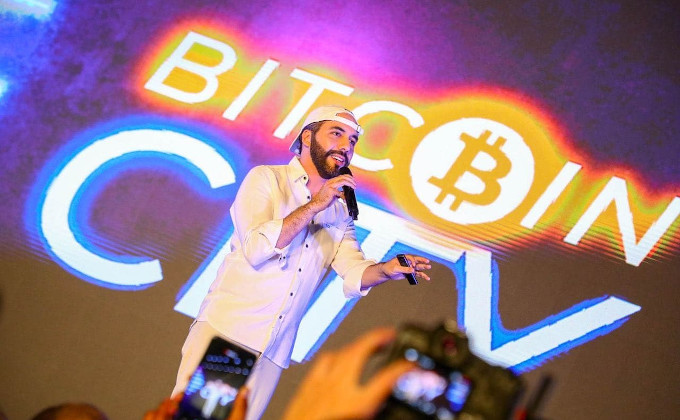 Charter cities are a Libertarian dream of how to do colonialism, but a bit more modern.

The idea was first floated by economist Paul Romer in a TED talk in 2009. A poor country would attract investors from a rich country to an enclave with its own laws — and particularly laws about low taxes. This would attract libertarian captains of industry, and magically produce prosperity in short order.

No attempts have got very far. In Honduras in 2012, the government went around the investors’ backs, the charter city scheme was eventually ruled unconstitutional, and the investors’ money went up in smoke. [Reason; Open Democracy] Tim Draper’s 2018 plan to take a chunk of Papua New Guinea and put it under the complete legal control of his company Ledger Atlas never got off the ground.

Libertarian charter cities have the same track record of success as libertarian seasteading, for the same sorts of reasons. It’s the Galt’s Gulch scam — rich libertarians are the suckers here.

Take me down to Bitcoin City

Unlike in June when Bukele announced Bitcoin would be legal tender, this time the President’s office has put out a press release on Bitcoin City. [Presidencia de la República de El Salvador, in Spanish]

Bitcoin City will have zero income tax, property tax, contract tax or city tax. The only tax will be VAT (sales tax) — half will be used to fund the city, and half to pay back the bonds.

Coincidentally, El Salvador just put a 40% tax rate on foreign donations to non-governmental organisations who are deemed to be acting politically. [AP]

If you buy a certain amount of Bitcoin bonds, this will apparently count as investment for permanent residency, with a path to Salvadoran citizenship!

(You will recall that Bukele announced permanent residence for 3 BTC investment in June. No laws or regulations to this effect are as yet in place.)

As it happens, the government is trying to put through a new “Ley de Dominio Eminente de Inmuebles para Obras Municipales e Institucionales” — “Law of Eminent Domain of Real Estate for Municipal and Institutional Works.” That could be useful for Bitcoin City. [Elsalvador.com, in Spanish]

The city’s construction will start 60 days after the bonds are financed — “en los 60 días posteriores al financiamiento se dará inicio a la construcción de la ciudad.” I don’t know whether that means when the bond is fully financed.

On the other hand, Bukele has a track record of making splashy announcements with short deadlines, and delivering a failure.

Look up Hospital El Salvador — the COVID-19 “hospital” with massive design issues all the way through courtesy of Bukele cronies, that was only a year late. [Elsalvador.com, in Spanish; Salud Con Lupa, in Spanish; Lancet Global Health]

It is all but certain that if the Bitcoin City project even breaks ground, then it will be a haphazard disaster, courtesy incompetent but politically trustworthy cronies hastily pushing out the most slapdash and dysfunctional nonsense.

(I wonder if the Tories could see their way clear to lending Dido Harding to the project.)

The Bitcoin City plan is a recycled version of a previous plan. The previous Salvadoran government did a deal with China to set up a charter city on the Gulf of Fonseca. The plan was to lease a large chunk of El Salvador to China — about 10% of the land area — for 100 years. China’s goal was to build a port for North America — but one they owned.

Here’s a scan of a Chinese real estate developer’s brochure about the project. [PDF, in Chinese and Spanish]

The “ZEDES” project is the most neoliberal project proposed by a government in the history of our country. Yes, and the proposal comes from the second “left” government, in its last year in office. Just like that, privatize a territory. Amazing.

(“ZEDE” is the Spanish acronym for Economic Development and Employment Zone.)

The current Bitcoin City plan is in the same location, in the Gulf of Fonseca. Here’s the circular city layout from the Chinese plan, and below it is the new project’s promotional graphic. A circle is the most geometrically appealing layout that fits that particular location: 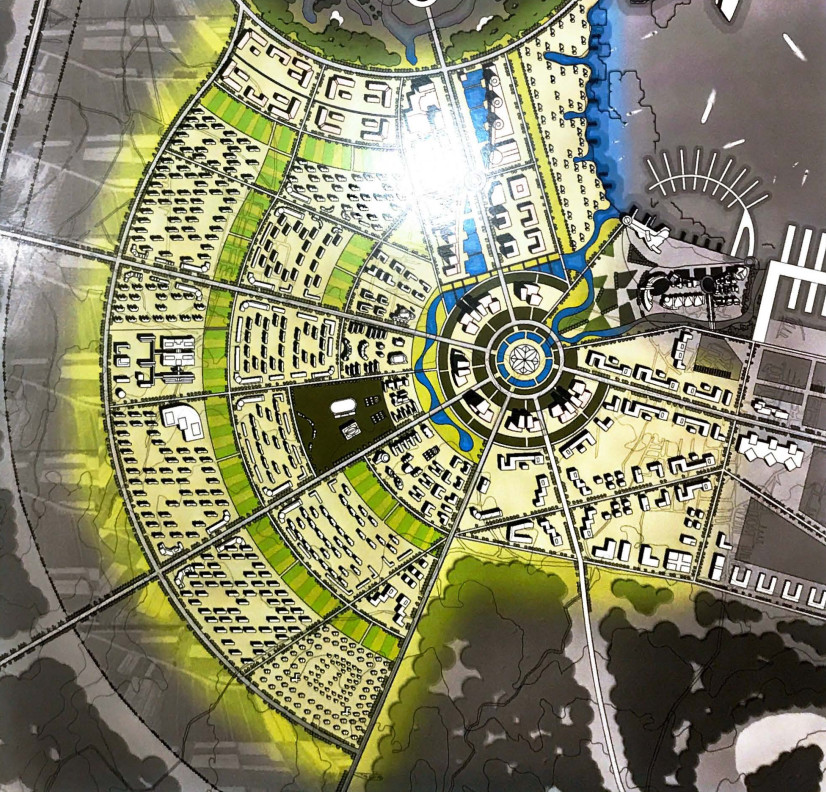 Volcanoes! Is there anything they can’t do?

Bukele confidently asserts that the Conchagua volcano in Fonseca “will power the whole city and will also power the mining.”

That’s geothermal power that hasn’t been built yet. If it was built, then it could be used to replace some of the expensive electricity that El Salvador imports or produces with fuel oil.

If Bitcoin hits a million dollars — as Mow is sure it will — the bond pays out handsomely. If it doesn’t, Blockstream gets the land. That’s a pretty sweet deal — though not so sweet for El Salvador.

Note that real-world usage of Bitcoin by the populace of El Salvador doesn’t seem to matter for this plan. Just as well, given that Chivo doesn’t actually work reliably.

I’m still reasonably sure that Bukele and the bitcoiners each consider the other a sucker they are absolutely going to skin. It’s possible that both will lose, of course.

I’m going to write a novella where a disaffected American takes his 3 BTC and moves to El Salvador, only to lose it all in volcano mining. So he starts walking north and learns the meaning of life right before being shot at the border by the libertarian who intro’d him to bitcoin

One Comment on “El Salvador: A $1 billion Bitcoin bond, to set up … Bitcoin City!”