The New York Attorney General’s office has reached a settlement with the assorted iFinex companies in the investigation they’ve been conducting since late 2018: [Press release; settlement, PDF]

This is absolutely as good a deal as iFinex could have hoped for — a wrist-slap, with some strong leashes attached.

Tether now have three months to present a winning story on their reserves. 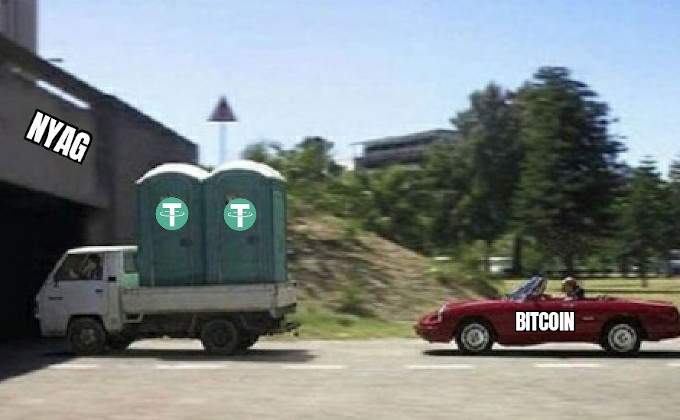 The settlement is 17 pages, and well worth your time. Someone enjoyed writing this. You’ll enjoy reading it.

The job this settlement does is to establish certain facts about the case — specifically, that Tether lied and lied and lied.

The settlement is not any sort of legal finding or judgement — but the NYAG wouldn’t have said these things if they didn’t have the evidence to back every word. And, legally speaking, these are not good facts.

Until February 2019, Tether represented that “Every tether is always backed 1-to-1, by traditional currency held in our reserves. So 1 USDT is always equivalent to 1 USD.”

This is a clear and unambiguous claim. But it wasn’t true.

Bitfinex/Tether lost their US dollar banking in April 2017, when Wells Fargo refused to process their wire transfers any longer. At this time, there were 50 million USDT in circulation. By May 2017, there were 108 million USDT.

But Tether didn’t. In fact, Tether didn’t have an account at all! What did they do instead? Tether stored $61.5 million in the Bank of Montreal — in the name of Stuart Hoegner, iFinex’s general counsel.

This didn’t stop them from printing more tethers. As of September 2017, there were 442 million USDT, with still only $61 million at the Bank of Montreal. Bitfinex had another $382 million in an account — which commingled customer funds and corporate funds. Tether accounted for this as a “receivable” from Bitfinex.

Tether contracted Friedman LLP to conduct an audit. This was never completed, but they did complete an attestation. To this end, Tether opened an account at Noble Bank on 15 September 2017, Bitfinex transferred $382 million into it from their account, and then showed Friedman the account balances, at 8pm that day. Per NYAG:

No-one reviewing Tether’s representations would have reasonably understood that the $382,064,782 listed as cash reserves for tethers had only been placed in Tether’s account as of the very morning that Friedman verified the bank balance.

This is why attestations don’t count as audits.

The iFinex companies lost their banking repeatedly around this time — as soon as the bank found out who its real customer was.

Without proper banking, Bitfinex and Tether relied on any payment processor they could get. This led them to a “purportedly Panama-based entity” called Crypto Capital Corp, and its principal, Oz Yosef.

CCC were not the most trustworthy of shadow banks. Per the settlement:

33. In May 2018, Bitfinex asked “Oz” how Bitfinex could “move money efficiently out of Cryptocapital.” That request came on the heels of a report in April 2018 that the government of Poland had frozen a Crypto Capital bank account holding at least $340 million. In response, “Oz” repeatedly stated that the account freeze was temporary. In the ensuing months, “Oz” would go on to provide a number of different excuses for why he could not return the funds to Bitfinex (or its clients), including tax complications, hurdles placed by various compliance personnel at various banks, bankers being on vacation, typos in wire instructions, and corruption in the Polish government.

34. At some point between April 2018 and July 2018, “Oz” informed Bitfinex that a Crypto Capital account in Portugal containing approximately $150 million of Bitfinex client funds had also been frozen.

Bitfinex continued to direct customers to deposit via CCC through 2018 — they seemed to have absolutely no other banking options.

But being unable to access nearly $500 million in customer funds — which are still frozen in 2021, by the way — led to a “liquidity crisis” at Bitfinex. In August and September 2018, $400 million was moved from Tether to Bitfinex.

But that’s OK! Bitfinex told Oz Yosef to transfer $400 million from the Bitfinex account at CCC to the Tether account at CCC. Both of which were frozen funds — but hey, it’s all just numbers.

Bitfinex represented itself to the public as solvent, with no liquidity problems. They also claimed they weren’t banking at Noble, even though they had been for a year by then.

Bitfinex opened a line of credit with Tether at this time, so it could send money to its customers at all.

This left Tethers unbacked by dollars on deposit.

Bitfinex continued to beg CCC for its money, to no avail — but told the world everything was fine.

The NYAG will not act against iFinex companies for conduct related to these matters, between 1 January 2014 and 18 February 2021 — unless iFinex break the settlement. This includes if any facts iFinex submitted in discovery turn out to be untrue.

when you read a consent agreement you should understand that sometimes the findings and undertakings are more significant than the money penalty (or p.r. posturing).

Is Tether in the clear now?

iFinex and its fans are spinning the settlement as an exoneration — that there was no finding against Tether of printing tethers without backing, or of Bitcoin market manipulation. [Bitfinex]

This is only true insofar as a settlement isn’t a “finding.” That iFinex violated the Martin Act is something that the NYAG can in fact find:

The OAG finds that the conduct set forth herein violated the Martin Act and Executive Law § 63(12).

If anyone tells you Tether was “exonerated,” they don’t know what words mean. Read the settlement:

Market manipulation wasn’t something the NYAG was looking into — except in the sense that Tether was deceiving the market as to their backing reserve. This settlement does not address in any way whether tethers were used to manipulate the Bitcoin market.

There are enforceable requirements upon Tether. The very minimum constraints you’d expect on a stablecoin. I wonder how well Tether will meet them.

Is anyone else after Tether?

The Department of Justice’s criminal probe into Tether is ongoing — and they’re still employing chain analysis consultants on this matter.

There’s a class action against Tether that’s ongoing. There were four different class actions making basically the same allegations, and they’ve been combined into one.

I thought the class action complaint went through the known facts pretty reasonably, though I couldn’t see how they made the jump from “these are the facts” to “this is therefore a good remedy.” But lawyers who’ve seen it think it’s got enough substance not to be dismissed out of hand. [Case docket]

Tether might try telling NYAG to go whistle, or they might just … not … do the things. They don’t operate in New York, right?

But violating the settlement is unlikely to go well for Tether, or for those linked to them. The same applies if Tether or Bitfinex are foolish enough ever to onboard a New York customer again. Or ever touch a US dollar — all US dollar movements touch New York.

So I expect that in three months, Tether will come up with something. Probably something inadequate, because they always have — but something to kick the can down the road.

A million years ago I worked for Enron and I tried to explain the business model to my dad and when I was done he said “that sounds like check kiting” and I rolled my eyes because DADS and I figured I hadn’t explained it correctly but it turns out I nailed it.