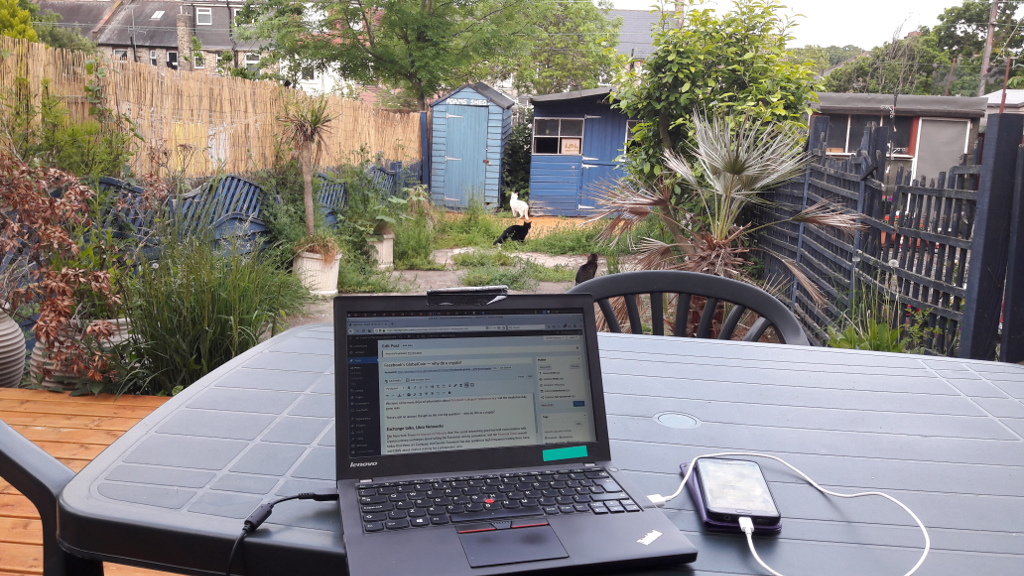 We’ve just hit three billion tethers. Every single one of which is backed by … something. Or 74% of something.

The Block obtained a Bitfinex court transcript from 16 May, and it seems Tether has been backing tethers with Bitcoins. And they’ll only redeem tethers if you bought them directly from Tether, and you’re not a US citizen. And if Tether have the cash on hand, which they might not. And if they feel like it. Amy Castor and Bennett Tomlin have analyses.

(Each stable coin is a token representing the horse that produced it. Poor ol’ iFinex, thought of the NY Attorney General and died.)

Pure coincidence, but that 5,000 BTC dump on Bitstamp last week just happened to be only a few hours after the Bitfinex hearing.

Bitcoin’s market cap is $130 billion but a $200 million sell order makes it crash by 10%.
I guess that should be a clue as to how many of you suckers will be able to actually cash out.
Enjoy you paper profits!

Larry Cermak points out what should have been obvious about Tether’s daily trading volume being twice the total supply — the volume numbers are almost certainly fake. “Based on my estimation, only about 5% of the total Tether volume is coming from exchanges that don’t fake the majority of the volume. And if I were to make an educated guess, at any given time, only a maximum of 15% of the total Tether volume is real.”

it's funny to imagine that Tether is being honest about having $0.74 cents for every Tether when they've lied about every single other thing they've ever proclaimed. But you do you, boo.

I mentioned last week how all the QuadrigaCX money is basically just gone — Amy Castor’s written up the EY bankruptcy trustee’s report. EY finally managed to cash those 1,000 bank drafts that were literally sitting on a stove for two years — so one trader watched his money vanish two years later.

New Zealand’s Cryptopia exchange went bust last week, and have filed in the US for bankruptcy protection. The initial liquidator’s report should be out by 4 June.

Coins from the January hack of Cryptopia are moving already.

James Edwards (CryptoMedication) is pretty sure that the HitBTC exchange is insolvent. Users are also reporting problems withdrawing cryptos — and delays in crypto withdrawals can’t be blamed on the banking system.

Bitcoin is a digital bearer asset that it’s really easy to mess up with — bitcoin custody turns out to be a super-hard problem. So Coinbase are looking to buy Xapo, who’ve been doing this for a while.

I made a cryptocurrency news tracker pic.twitter.com/JjR58sCQBA

Craig S. Wright registered copyright in Bitcoin 0.1 and the white paper — and it’s been greeted mostly with derision. The nChain team is still talking it up — Jimmy Nguyen bragged to the Financial Times that “The U.S. Copyright examiner responded far more quickly to the copyright applications than is normal.” The US Copyright Office has replied (archive) — explaining that they responded quickly because Craig Wright paid them $800 for an expedited response. And noting in passing that “Someone who intentionally includes false information in an application may be subject to criminal penalties.”

That Copyright Office press page is new, by the way — it was created on 22 May. How much do you need to annoy a government agency that it literally starts a fresh new press updates web page just to refute your claims?

The Block did a good podcast with Stephen Palley that you should give a listen to — includes interesting stuff on the Kleiman v. Craig Wright litigation.

The Financial Conduct Authority (FCA) writes up the one consistent use case for cryptos — Over £27 million reported lost to crypto and forex investment scams. They suggest you read their ScamSmart site.

The SEC is really rolling on busting bad ICOs. They got an emergency injunction against Jose Angel Aman’s “Argyle Coin” ICO from October 2017, which ended up being run as a ponzi scheme. (SEC complaint.) And one against Daniel Pacheco of iPro, a fraud so weird that Matt Levine led with it in yesterday’s Money Stuff.

The SEC denies yet another Bitcoin ETF — as if you expected anything else. This one is the Van Eck proposal.

Also the SEC — “Are you in Fintech and want to speak to us about an issue? It’s ‘Come as You Are’ to the SEC’s Philadelphia office June 3 for a conversation with FINHUB.” Always talk to your regulator before you start a fabulous new thing.

The IRS will be publishing new advice on how to treat cryptos for tax purposes, “soon.” This will update their 2014 advice.

Dutch authorities shut down a Bitcoin “mixer” for money laundering — since obscuring transaction trails is literally what “mixers” and “tumblers” were designed to do. Bitcoiner Sjors Provoost is outraged that the law could enact the “worrying precedent” of treating laundering of money as money laundering.

Provoost also literally says “Banning mixers is akin to banning cryptography”, which is like saying that banning crystal healing is akin to banning transistors. And “This action puts lives at risk” — though the obvious answer is: if you’re going to do dangerously criminal things, have you considered not using a permanent immutable public ledger for the purpose?

(This is all the application of existing laws, of the sort that were in place since before Bitcoin. If you transmit value that substitutes for currency, the laws about it are well-established. I concur that FinCEN can get well over-the-top at times — and living one’s life under the loving eye of Sauron can become tiresome, even as I’m a pretty law-abiding sort in practice — but none of this is new, and carrying on like it is is nonsensical.)

One bitcoiner tries some do-it-yourself money laundering with a mixer — and ends up with a squeaky-clean wallet. Trustless, indeed.

Looks like John McAfee didn’t get busted after all. I’m sure everyone will be relieved.

The Brave web browser will now let you earn BAT tokens for looking at advertisements! … Oh, you wanted to withdraw your BATs? LOL, sucks to be you.

If you hire a company to clear up a ransomware infection, they’ll almost always just pay the hackers — and then charge the customer extra on top.

Telegram’s TON blockchain network is apparently launching in Q3 this year, according to an investor note. That is, they will have something — anything — before October 2019, so that they don’t have to return the investors’ $1.8 billion (in actual US dollars, not cryptos). They also plan to list GRAM tokens on the Binance, Huobi and OKEx crypto exchanges.

Ben Munster does a curry profile on Mike Dudas of The Block.

Alex Sobel MP — who I met concerning cryptos in October last year — has an article, “The Bitcoin Scam,” in the Spring 2019 issue of Tribune. (I helped with fact-checking.)

Jonathan Pinnock’s new “mathematical mystery” A Question of Trust is out now! (UK, US.) I helped fact-check the cryptocurrency bits. The scene where the main character’s father talks about the ICO he just bought into is chillingly true to life. 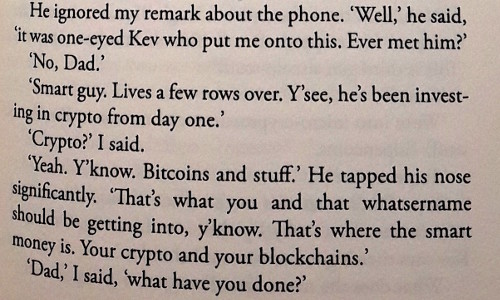 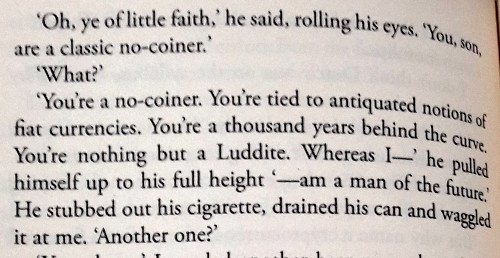 Left-wing politics site Isocracy has a quick-read version of Attack of the 50 Foot Blockchain — Cryptocurrencies: A Bubble Economy with The Art of the Steal. (Lev Lafayette from Isocracy summarised the book, I okayed it.)

As well as my blog and Patreon, you should totally subscribe to Amy Castor’s blog and Patreon. Every story in her newsletter of yesterday is amazing. Did you know that Black Banx, formerly WB21, did a Visa card … without permission from Visa?

Please explain all variants of cryptocurrency/block chain as gummi bears. Especially "does anyone ever get to eat them," does real currency exchange hands, and is there really only empty wrappers stored in my pocket?

Newsagent tells me he loves the @FT ’you can do your paperwork on it, so thick’

The best part of being a journalist is getting to ask rich people uncomfortable questions like “how much money do you have?”