I’ve done multiple media interviews in the past week, all asking the same three questions:

In order: I’ve got explaining the crash of UST down to about a minute, El Salvador was already screwed, and we should be so lucky.

I’ve written up my answers here, just as if this will stop the questions from being asked yet again. YOUR INFALLIBLE* GUIDE TO THE CRYPTO CRASH!

Here’s one of these interviews, on BBC World News on Thursday 19 May. [YouTube]

How correlated an investment is Bitcoin?

We saw this in March 2020, when all the markets went down because investors panicked by COVID lockdowns were rushing into US Treasuries.

When the NASDAQ went down a few percent on Thursday 5 May, Bitcoin lost about 10%. The UST crash a few days later shook confidence in the crypto market further.

Does the UST/ Luna collapse signal the end of the crypto bubble?

Bitcoin had mainstream asset bubbles in 2013 and 2017. In both cases, the bubble didn’t pop — it slowly deflated over the next six to twelve months, even as it was obvious the party was over.

In the case of the 2021 bubble, I’m pretty sure the retail dollars were only flowing in from February to June 2021.

The rest was market manipulation and a stupendous barrage of promotion from venture capitalists promoting Web3 and NFTs to the public.

The crypto ads at the Super Bowl were a sign of desperation, not health.

But UST/Luna feels like it’s spooked the market. Sentiment has changed. There’s no reason for any crypto to have any particular price — so sentiment is crucial.

I’ve noticed a lot more mainstream news articles saying that crypto is entirely rubbish — often from outlets who were pumping it a month or two ago. The words “crypto winter” are being thrown around again.

There’s increasing reports of crypto exchanges running the KYC scam — they make it all but impossible to withdraw  by suddenly demanding much more Know-Your-Customer information than they wanted for you to deposit. Coinbase is becoming notorious for this.

So everyone suspects they’re on borrowed time.

Is Terra a Ponzi scheme?

Of course, I wouldn’t ascribe intent to Do Kwon and Terra. But it is true that with UST — and indeed with the wider crypto market — early investors can only be paid out with actual dollars coming in from later investors.

Crypto is not a Ponzi scheme — it just works like one.

Was the crypto market worth a trillion dollars?

No, it wasn’t. That’s the made-up promotional number called “market cap.” This isn’t at all like the market cap of a stock.

All the big headline numbers for crypto are made-up virtual numbers. That money never existed.

Actual dollars are a lot scarcer. As part of finance, crypto is very small. But when a number is going up, that’s a headline — and when the numbers are virtual money in the billions, that certainly gets a headline.

So, where do the numbers come from?

You calculate the market cap of a cryptocurrency by taking the last price a token traded at, and multiplying it by all of that token that exist.

This includes magic beans you just created yesterday and managed to trade at least once on UniSwap, thus assigning them a largely-spurious price tag in dollars.

(I think this is the key innovation of DeFi — it lets you put a dollar price tag on things that absolutely don’t warrant one.)

“Market cap” is a completely useless number. It doesn’t tell you anything about the crypto that a trader could use.

If you’re a trader, the numbers you want involve how thin or deep the market is for the token, how volatile the price is, and how hard it is to turn the token into actual dollars, or at least bitcoins or ether. Market cap tells you none of these.

The only use case for crypto “market cap” is as a big number to use in headlines, so you can claim the crypto market lost “value” — value that never existed. All these numbers are virtual, and there are vastly less actual dollars in the system.

The dollar value of UST was functionally imaginary. There was never $18 billion there.

Reserve-backed stablecoins can claim a slightly more reality-based market cap — except they all seem to move from being backed by actual dollars in a bank account, to investing in risky garbage. Because risk pays higher interest. I commend to you Izabella Kaminska’s recent essay on how this works. (And go subscribe to The Blind Spot!) [The Blind Spot]

But even Tether seems to have had the frighteners on it lately. Billions of “dollars” in tethers have been redeemed — but we know from the CFTC settlement that Tether has a history of issuing tethers as loans, and accounting the loan itself as backing — that is, printing tethers from thin air. Celsius has also admitted to borrowing tethers on this basis.

So without evidence of actual dollars moving, I’m assuming these “redemptions” are cancellations of unbacked loans.

The canaries in the Bitcoin mines

In the second half of 2021, US-based crypto miners started stockpiling their mined bitcoins. This was new behaviour. Miners didn’t hold onto cryptos for ages in the ten years previously — maybe for a short time, but then they sold it.

I can find no sensible explanation for this — except that there aren’t enough actual dollars in the crypto market to sell the bitcoins without crashing the market.

Some coiners confidently tell me that crypto miners magically transmuted some time in June 2021 from uncompromising economic agents into Bitcoin moon boys, who are sure it’ll go to a million. I don’t believe them.

The miners have paid their bills by borrowing against the bitcoins — from other companies in the crypto industry. Because they all know they’re all in this together. 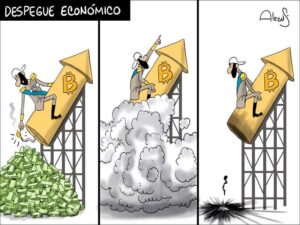 What about El Salvador?

As anyone who reads this blog will be well aware, Bitcoin in El Salvador has been a disastrous failure.

The bitcoins in the Salvadoran treasury have gone down in face value. But the money wasn’t lost when the price of Bitcoin went down — the money was lost when President Nayib Bukele bought the bitcoins.

$200 million that the country absolutely couldn’t spare has been put into bad infrastructure, dodgy public procurement contracts and bitcoins. That’s the disaster for El Salvador.

Bukele still talks up Bitcoin. But everyone’s problem right now is that Bukele’s negotiations with the drug gangs that plague the country have broken down, and he’s gone as hard authoritarian as he thinks he can get away with.

What about the ordinary investors?

It would have been nice if you media guys had called out crypto before this, when it might have done those ordinary investors any good. Still, better late than never.

You can totally make money in crypto! I’d never say that you can’t. But you have to be a better shark than the sharks who built the shark pool.

Crypto is a zero-sum trading environment — every dollar a winner makes, a loser lost. There is no way that everyone can come out ahead.

The money goes to the big guys. It comes from the mums, the dads, the grannies and the desperate young people looking for a way out of a hopeless situation.

The crypto market is completely unregulated. There are a few exchanges that are under some sort of regulation and may behave reasonably well. But the vast majority of crypto trading happens in unregulated offshore casinos where the only rule is what they can get away with and not lose customers.

Regulators are being expected to protect investors better. The SEC has specifically asked US Congress for the power to do so.

More crappy algorithmic stablecoins are collapsing. Mainstream investors are getting the message to stay away. Regulators are not happy, and are being expected to do something about all of this.

If crypto isn’t functionally regulated to hell and back, I expect another bubble in three to five years. Because suckers, suckers never change.

I expect the crypto market to continue deflating for the next several months. I don’t expect Bitcoin’s excuses to change, ever. Number go up! Eventually!

2 Comments on “Your guide to the crypto crash — Terra UST, Bitcoin and El Salvador ”