Bitcoin is not the biggest problem in El Salvador right now — it’s Bukele using the gangs to go as full dictator as he thinks he can get away with.

Bitcoin continues to be a problem as well, of course.

On Sunday 27 March, President Nayib Bukele demanded that the Legislative Assembly declare a thirty-day state of emergency over gang violence that led to 62 murders on Saturday 26 March.

Constitutional rights that were suspended include freedom of gathering and association, the right to legal defence, and the inviolability of correspondence and telecommunications. Suspects can be held for 15 days, up from 72 hours. [La Prensa Latina]

This is being enforced in Bukele’s standard style: flashy action for the cameras, and not so much attention to details.

With 12,000 arrests so far, there are many reports of apparently arbitrary arrests to meet quotas. Four baristas at 1200 Café, an award-winning coffee shop, were arrested while wearing their work uniforms and were paraded about as criminals. The baristas were only released after the hashtag #1200cafe became a trending topic from people tweeting about their arrest. With the right to defence suspended, hashtags have been working better than lawyers. [Twitter]

There are also gang member arrests, of actual gang members, who are paraded around to show how effective the police are … and who then turn out to have been past activists for Bukele’s Nuevas Ideas party. [Twitter]

Bukele has threatened to starve those designated as gang members in jail. “There are rumors that they want to start taking revenge on random, honest people. If they do that, there won’t even be one meal in prisons. I swear to God they won’t eat a grain of rice, and let’s see how long they last.” [Yahoo! News]

Bukele has gone into open war on journalists in El Salvador, accusing them of having gang relatives and so on. El Faro wrote about the judge who freed an MS-13 gang leader who was to be extradited to the US. Nuevas Ideas accused the journalist of being linked to the gangs. [Expediente Público, in Spanish]

Here’s a new Bukele video that I’m calling “Triumph of the Shill.” It’s ten minutes, but you’ll get the idea in the first thirty seconds or so.

New soldiers and police officers for the war against gangs. pic.twitter.com/s5G3g8vF8J

Bukele canceled his appearance at Bitcoin 2022 in Miami at short notice to deal with the state of emergency. [Twitter]

Let’s see if the state of emergency is lifted in a week.

How badly has Bukele screwed himself?

The state of emergency is being used as a public relations operation to distract from Bukele’s economic woes, as well as El Salvador’s ghastly murder rate.

After Nuevas Ideas gained a solid majority in the Legislative Assembly in the May 2021 elections, Bukele rammed through bills with no discussion and no notice, and spent money like water.

This made him popular with his base — but El Salvador uses the US dollar as its currency, and deficit spending has to be paid back in short order. The 2021 budget deficit was $1.417 billion. [Trading Economics]

Ricardo Valencia has written an excellent opinion piece in El Faro about how the war in Ukraine means Bukele has screwed himself with his bid for isolationism, and his fondness for what Valencia calls Vladimir Putin’s approach to propaganda. Extremist libertarians turn out not to be enough of a market. Valencia also thinks the prospective market for Bitcoin Bonds included a lot of now-sanctioned Russians. [El Faro, in Spanish]

(The local term for “troll farm” is “troll center” in English — a pun on “call centre,” one of El Salvador’s major industries.)

Carlos E. Vela at Elsalvador.com thinks much the same — the country is in debt, the World Bank and IMF won’t help, Bukele spends recklessly, and he thinks isolationism will work for him. Bukele is not letting this crisis go to waste. [Elsalvador.com, in Spanish]

(Vela suggests in this piece that Bukele orchestrated the gang violence as an excuse for the crackdown. This is a commentary on Bukele’s suggestion that the violence was orchestrated by the opposition, the local non-governmental organisations and George Soros.)

Libertarians who aren’t so concerned about other people’s liberties continue to be honoured guests of the President. They have dinners with the government, and go for helicopter tours of the LaGeo plant in Usulután and visits to Bitcoin Beach. Government media came along to publicise the tours.

Samson Mow left Blockstream in March. His new company is called JAN3, and he wants it to build Bitcoin City!

The Bitcoin Bonds, expected to be issued in March, still haven’t shown up. The government is probably busy keeping everyone safe with random arrests.

Crypto exchange Bitfinex hopes the Bitcoin Bonds will be just the first government and corporate bonds they issue, to raise funds from “crypto-focused investors.” Paolo Ardoino of Bitfinex told The Block that they regarded the Salvadoran bond as a “loss leader.” [The Block, paywalled]

Which non-sanctioned entities are going to buy El Salvador’s Volcano Bonds? “There is a ton of wealth that is outside the banking system and wants to remain outside it,” said “one industry executive who has experience of working with Bitfinex.” Does that translate to anyone other than “crooks”? [FT, paywalled]

Bukele says the delay in the Bitcoin Bonds is because the government is busy finalising the pension reform — where they nationalise the pension funds, which a lot of observers think is Bukele trying to raid the funds. [Twitter]

Paolo Ardoino has tweeted that “Bitfinex and Tether have set up a relief fund to help the families of the people affected by the pandillas in El Salvador,” to which they’re donating 25 BTC (about $1 million). No other details are available as yet. It’s reminiscent of Tether’s “Deltec Cares” initiative in 2020, which gave a similar lack of detail. [Twitter]

How about that Chivo Wallet, eh

Millions of dollars were transferred from Chivo to a bank. The bank notified the Fiscalia (attorney general), and the Fiscalia asked the bank to freeze the funds. The culprit was caught. The government has now asked banks to monitor large transfers to or from Chivo more closely.

There hasn’t been any official statement — but the sequence of events has been confirmed by two bank sources and one government source. The theft was covered up so that it wouldn’t be announced just before Bukele’s planned appearance at Bitcoin 2022 in Miami. [Twitter; Twitter]

This appears to be standard practice in El Salvador — Banco Agricola suffered a breach in 2021, and didn’t admit it until the rumours were all over Twitter. [Elsavadorgram, 2021]

There are rumours that Bukele will claim a Bitcoin “hack” — though the bitcoins are apparently in custody in BitGo.  But claiming the BTC backing your liabilities was stolen is a time-honoured exit scam.

Chivo remains as popular as ever with ordinary Salvadorans. “He has $2.57 worth of bitcoin in his Chivo Wallet and the bus costs $0.50. But buses do not accept bitcoin — and it’s probably for the best. ‘If they accepted bitcoin it would be absolute chaos,’ he says. ‘It can take up to 15 minutes to pay. Imagine.'” [ABC]

Douglas Rodríguez, president of the Banco Central de Reserva (BCR), puts El Salvador’s total remittance income in January and February 2022 at  $552.7 million and $572.6 million respectively, for a total of $1.125 billion. Of that, $19 million came in via the Chivo wallet — that’s 1.7%. [Elsalvador.com, in Spanish]

Mario Gómez was interviewed by El Diario de Hoy about the problems with Bukele’s Bitcoin scheme, and the crypto people who Bukele brought in to promote it. [Elsalvador.com, in Spanish] 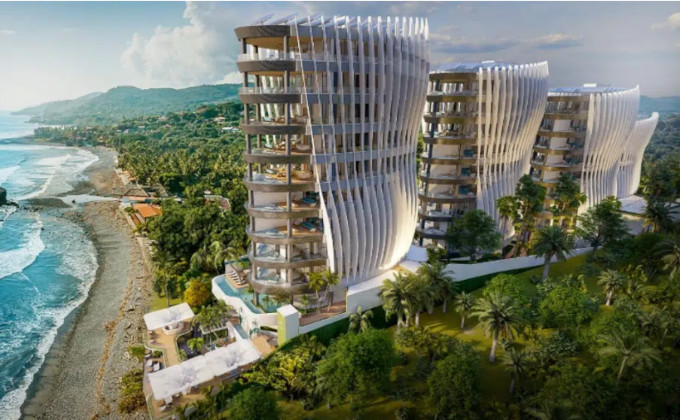 Bitcoin Towers will be four 25-storey buildings to be built on beach sand in the Costa del Sol, La Libertad (near Bitcoin Beach) and La Unión (where Bitcoin City will never be built). [La Prensa Grǻfica, in Spanish; Elsalvador.com, in Spanish]

You can buy an apartment as an NFT. I’m presuming that the legal purchase of a flat as an NFT will be in the sense of not being as the NFT. [La Bitcoin Towers]

The renderings depict giant out-of-place alien monoliths putting their nearby villages in shadow.

There’s another apartment project on El Tunco beach, promoted by an NFT company called Fusso. The apartments themselves will also be marketed as NFTs. Fusso shows no signs of having existed before a month ago. [press release; Elsalvador.com, in Spanish]

Milena Mayorga, Salvadoran ambassador to the US, posed next to a Bitcoin Towers advertisement at Bitcoin Miami 2022. [Twitter]

The future of El Salvador is written with LiBerty, “B” of #Bitcoin, Beaches, and Beautiful people, and now also of La Bitcoin Towers, something never dreamed before September 7th of 2021.

Thanks for your trust in El Salvador, great project @tarek_kirschen! 👏 pic.twitter.com/aytisI00Dc

Update: the Troll Center has discovered this post! For some reason this post set them off, and not the past ten months of posts on El Salvador’s Bitcoin disaster, including three Foreign Policy articles. They are very upset that I’m not letting them poop all over my blog, and that I looked at their IPs as listed in the comments queue. Almost all US-based, too — Bukele now needs to import his astroturf. Keep posting, guys.