El Salvador is two months into trying to use Bitcoin as a national currency. The official Chivo wallet still doesn’t work, and the whole endeavour is still plagued with secrecy and incompetence. While setting a great big pile of money on fire. 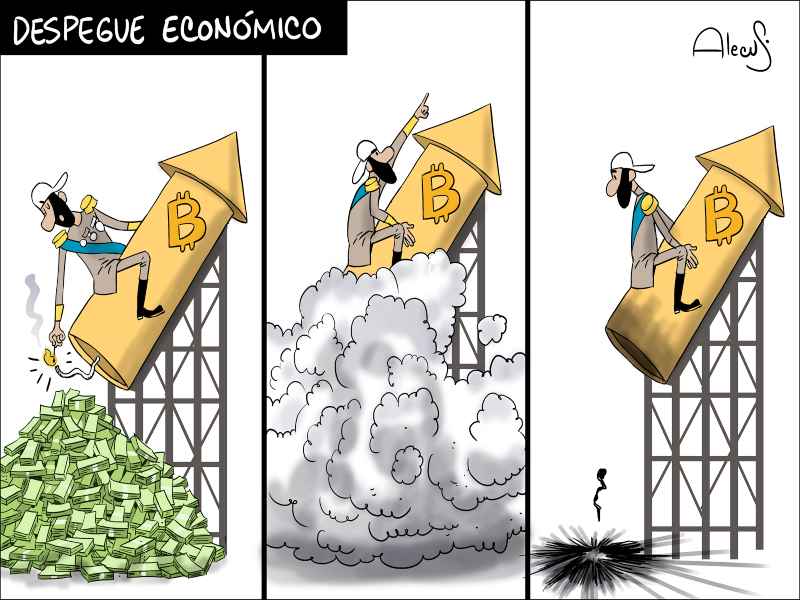 Trying to use Bitcoin in El Salvador

Bitcoin purchases are quite popular in El Zonte, a.k.a. Bitcoin Beach. [Elsalvador.com, in Spanish]

Bancoagrícola’s Wompi payment network, which shops use to accept various cards, will soon allow purchases via Bitcoin, over the Lightning Network. The bitcoins are deposited in the business’s bank account as dollars. Transaction times may be between one minute and fifteen minutes — which sounds like they’re touching the Bitcoin blockchain somewhere. The Wompi transaction charge is 2.85%. [La Prensa Gráfica, in Spanish]

The Ministry of Finance is finally accepting tax payments via Bitcoin, per article 4 of the Bitcoin Law. [La Prensa Gráfica, in Spanish]

Bitcoin seems to be unbanking the banked. Fundación para el Desarrollo Económico y Social (Fusades) runs monthly surveys on consumer confidence. In June 2021, the answer to “How do you prefer to keep your savings?” was 52% banks, 36,7% cash — but from July 2021, that number’s been over 50% cash. [Elsalvador.com, in Spanish]

Some Salvadorans have been getting into low-level day-trading on Bitcoin’s volatility on their Chivo wallet — the thrill of watching your $30 turn into $25 or $32! [El Faro, in Spanish]

The day traders particularly liked the part where the Chivo wallet would let users freeze the price of Bitcoin for one minute when making transactions, so you wouldn’t lose out to sudden volatility — like when the price went down $10,000 in three minutes on Bitcoin Day. With the wallet price frozen while the real price changed, the day traders could choose whether to buy or sell, and so make a few dollars.

Chivo has discovered why freezing the price of a volatile commodity doesn’t work, and is now striking out at this “scalping” — which they had to admit wasn’t actually illegal. You can no longer freeze the exchange rate for a minute, and there’s now a three-minute wait between transactions. [Elsalvador.com, in Spanish]

The DUI fraud that I outlined previously is still happening — you can create a Chivo wallet with just a DUI number (Documento Único de Identidad — the national ID card) and date of birth, because nobody checks any of the photos or scanned documents. An unknown but large number of Chivo wallets are fakes created by stealing someone’s DUI to get the $30 signup bonus. This has been a huge scandal locally through October. [CoinDesk; Elsalvador.com, in Spanish]

If your DUI is stolen to create a Chivo wallet, Elsalvador.com has set out steps to take: [Elsalvador.com, in Spanish]

Chivo appears to have access to the DUI database. One lawyer got a phone call from Chivo: “They just called me from Chivo to tell me that I can now use my wallet, that they’d fixed the error. When I told them that I hadn’t downloaded it, a deathly silence. When I asked them how they had obtained my cell phone number they hung up on me.” [Twitter]

The authorities are dealing with Chivo fraud thoroughly and predictably — they appear to be arresting the victims who had their DUIs stolen and abused by crooks. [Twitter; Twitter, archive] 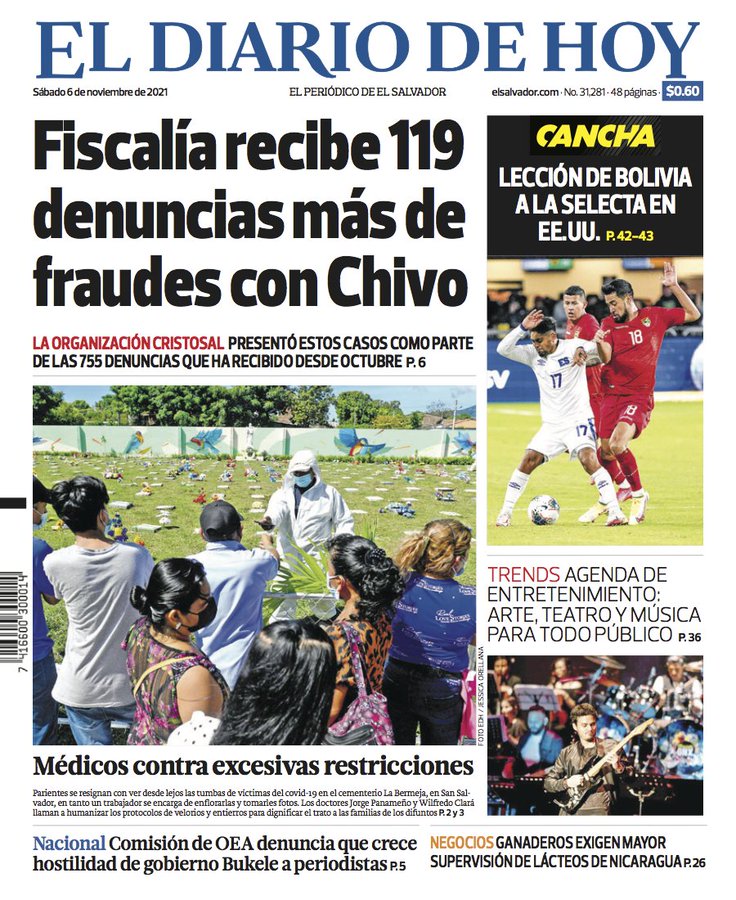 The government is no longer promoting Chivo. Radio, TV and social media advertising have stopped. The Chivo buses and vans have been sighted wth plastic taped over the Chivo logo.

Most call centre staff have had their contracts ended early: “Today there was a sudden dismissal of personnel from the Chivo Wallet Call Center. The fired are not being recognized at all. And some are only being offered a one-month contract.” [Twitter]

In fairness, you can tell there were very few real-world users of Chivo, because the call centres were ghost towns — and that wasn’t because the app was working perfectly.

The Chivo street promoters are also complaining of getting screwed over — and not even being paid their final wages in full. [Elsalvador.com, in Spanish]

If you’re in the US and want to send money to El Salvador via Chivo, you still need to pay in from a card — Chivo doesn’t yet have money transmitter licenses. One user paid a $6 fee for an international payment on sending $200. [Twitter; Twitter, archive]

Woke up this morning, I had a billion dollars in bitcoins! “Chivo is nuts,” said one Facebook comment. “Now it turns out that I’m a millionaire. From $68 to more than $3 million.” Chivo was displaying Bitcoin balances in the millions or billions of dollars. This was apparently two bugs: (a) a negative balance was possible, and (b) the negative number had an integer overflow in Chivo’s computer system, so it was displayed as a very large positive number. [Elsalvador.com, in Spanish; Elsalvador.com, in Spanish]

Aviv Milner’s When The Music Stops has an interview with Oscar Salguero, a Salvadoran living in the US who frequently visits home, about Chivo’s failures in practice. “They’ve ignored a lot of best practices, even common sense.” Oscar has been testing out the various Bitcoin wallets so he can educate and inform his fellow Salvadorans. This is 90 minutes, but it’s an essential rundown on how it’s been going on the ground. [Anchor.fm]

Aviv also interviewed Nelson Rauda, a journalist at El Faro, about how Bitcoin was going in El Salvador. This one is essential too. [Anchor.fm]

Working in a gold mine

The government is mining bitcoins at the LaGeo geothermal plant in Berlín, Usulután — an area where a lot of villages and towns don’t have running water. And additional geothermal wells do affect the local ground water. This article is a reminder that “renewable” energy isn’t free of environmental impact either. [El Faro]

How’s the mining operation going? Well, they spent $4,672 worth of electricity to mine $269 in bitcoins. [Elsalvador.com, in Spanish]

Trust me, I’m from the Bukele government

There was another large demonstration against President Nayib Bukele on Sunday 17 October. El Faro estimates about 4,000 attendees this time — less than September’s 15,000, but still a remarkable number for El Salvador. [El Faro, in Spanish]

Bitcoin went up in price — so Bukele declared that the $4 million profit on the government Bitcoin holding would be spent on a veterinary hospital! This is being done without selling any of the bitcoins. The plan also coincides with slashes to funding for municipalities. [La Prensa Gráfica, in Spanish]

El Salvador is meeting with the International Monetary Fund this week, still looking for the $1 billion loan they were hoping for. The IMF didn’t mention Bitcoin in its press conference on Thursday 4 November, but they did say that progress had been made “toward measures needed for a potential program supported by the IMF. Development since that time will require some recalibration of policies needed to ensure inclusive growth, fiscal sustainability and financial stability.” Tobias Adrian and Rhoda Weeks-Brown from the IMF blogged in July about why Bitcoin would be a terrible national currency. [IMF]

The government of El Salvador wants the website domain name “elsalvador.com” — for all Salvadorans! That elsalvador.com is also the domain for the newspaper El Diario de Hoy, and that the paper’s been getting heavily stuck into Bukele’s government over its stupid Bitcoin plan, is just a coincidence. The government already has the whole .gob.sv subdomain as well. [Twitter thread]

El Faro ran an awful puff piece interview with Alex Gladstein of the Human Rights Foundation — which absolutely should not be confused with the much better-known Human Rights Watch. Gladstein said the things he always says about how Bitcoin is true freedom and talking bizarre conspiracy theory Bitcoin economics, but I’m mostly disconcerted that El Faro put this guy forward as someone to be taken seriously. He did call Bukele authoritarian and say not to use Chivo, though. [El Faro]

Using Bitcoin as money on a national scale basically requires a custodial wallet — one run by a touchable entity who are held responsible for how they handle other people’s money, with zero transaction fees inside the system. Like PayPal, but more accountable. Pretty soon, we’re really talking about a system run by commercial banks.

Chivo is what’s been put forward for that job. So I’d have expected the problems with Chivo to slowly get fixed. But it seems the government is stepping away from Chivo. Despite spectacular — and frankly unbelievable — numbers posted by Bukele, Chivo really doesn’t have a lot of users for an official national payment system.

Self-hosted wallets are obviously more Bitcoin — but they’re less like a currency. Because electronic peer-to-peer cash can’t work with ten minutes for a transaction, high transaction fees and the incredible brittleness of using cryptocurrencies directly. This is precisely why Bitcoin failed as cash the first time around.

I expect Bukele to keep promoting Bitcoin as a point of personal pride. But as a practical day-to-day currency, it’s not doing so well right now.