The Republic of the Marshall Islands used to be a US territory, and is now a sovereign country — though it’s still closely associated with the US, and uses the US dollar as its currency. About half of the Republic’s budget is US foreign aid.

The US used to test hydrogen bombs on the islands, and still owes the country over $500 million in reparations. Foreign aid from the US is due to be cut in half — from $60 million to $30 million — when the financial provisions of the Compact of Free Association between the US and the Marshall Islands expire in 2023.

Much like Facebook’s Libra, the SOV was strangled in the crib by regulators — and only dragged on for years because the crypto true believers promoting it wouldn’t take no for an answer.

But it’s frightening that a country could be so desperate as to fall for blockchain promoters.

They do, however, have plans to send crypto entrepreneurs to a radioactive atoll. 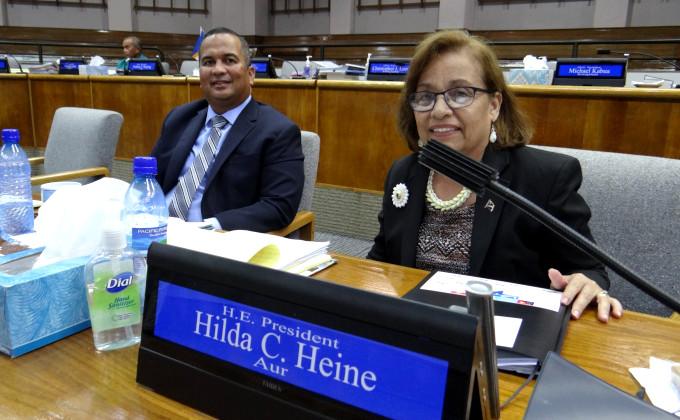 Why would you do this?

In early 2018, the 2017 crypto bubble had only just peaked — and making ICO tokens and selling them still looked like a plausible way to generate free money. Though it usually wasn’t a country doing it.

It looked very like the Marshall Islands government was lured in by the prospect of a magical free Internet money get-rich-quick scheme — courtesy blockchain promoters who knew a desperate mark when they saw one.

The SOV was thought up by Neema, an Israeli fintech. David Paul, the Marshall Islands government senator who was the main internal promoter of the SOV project, met Barak Ben Ezer from Neema in January 2018. Paul had never heard of Bitcoin or cryptocurrencies before this, but he thought: what have we got to lose? [Bloomberg]

The Marshall Islands had only one US dollar correspondent bank left: the First Hawaiian Bank, owned by BNP Paribas — everyone else had left because the islands weren’t much of a market. First Hawaiian already wanted to leave the Marshall Islands because they thought it was a regulatory risk, and were only holding on until the country could find another bank. [WSJ, 2018, paywalled]

First Hawaiian leaving the Marshall Islands would cause serious issues — nobody could get paid in dollars, including those working at the largest employer, the local US military base.

David Paul was tempted by Bitcoin-style “bank the unbanked” rhetoric — the blockchain promoters told Paul how the Marshall Islands might even be able to do without banks entirely if they could use a cryptocurrency instead.

The Declaration and Issuance of the Sovereign Currency Act 2018 was passed on 1 March 2018. It set out a plan to sell 6 million SOVs in an “Initial Currency Offering,” and retain 6 million. [RMI Parliament, 2018, PDF]

This would be done as a proof-of-work blockchain, with the energy use that comes with that — though the press kit noted that global warming is one of the Marshall Islands’ biggest problems, as the country could literally disappear beneath the waves. That Neema suggested a decentralised blockchain for a completely centrally-administered official token looks very like they had no idea what they were doing.

On 11 April 2018, the US ambassador sent the Marshall Islands government a letter expressing US concerns about the abuse of the SOV for money laundering and terrorist financing, and warned that the islands could be cut off from the world financial system entirely.

First Hawaiian told the Marshall Islands that they would almost certainly leave immediately if the government did the SOV as a cryptocurrency without the strictest of anti-money-laundering procedures in place.

The plan was for the SOV only to be sold to fully documented buyers, with every holder to be checked against the US Office of Foreign Asset Control — but this didn’t convince the US or First Hawaiian.

The International Monetary Fund further warned the government in September 2018 against releasing the SOV. As well as the risk of being cut off from the finance system, a volatile second official currency risked balance sheet problems for both the government and for private enterprise. [IMF, 2018; IMF report, 2018, PDF]

The SOV plan prompted a vote of no confidence in President Hilda Heine, who was pushing the scheme, in November 2018. [Guardian, 2018]

The conspiracy theory economics of the SOV

The SOV plan was functionally dead. But reports continued through 2019 and 2020 that the SOV was still a thing that would totally happen once the regulatory issues were resolved — the issues that had already killed it. [Bloomberg, 2019; Times of Israel, 2019; Decrypt, 2020]

The opposition won government in early 2020, but were initially fine with the SOV project continuing — though they commissioned a due diligence report.

By 2020, the project was being promoted by Neema spinoff SBF Tech, as a token on Algorand rather than a proof-of-work chain. [press release, 2020]

The SOV Foundation promotes the SOV as an implementation of Bitcoin’s bizarre goldbug-derived conspiracy theory economics:

Our Money is broken. Cross-border finance is inefficient, needlessly complicated, and prohibitively expensive. The patchwork of international regulation is dense, opaque, and easy to circumvent.

Governments and banks can create new money at will, Bad actors exploit the ease with which traditional government currencies and cryptocurrencies can cross borders to launder money and finance terrorism. Worst of all, billions of people are unable to access even basic financial services due to cost or lack of access.

This is about as coherent as any other crypto “bank the unbanked” scheme — and note how it proposes breaking international regulations as the way that the SOV would work.

A government is also supposed to sign up to this notion that governments are the real threat.

SOV is a national currency of a sovereign country. It therefore complies with all banking regulation and is subject to international treaties.

It’s unclear that this logic would convince anyone who they needed to convince.

The IMF has issued a report on the state of the Marshall Islands economy. [IMF; report, PDF]

This IMF report is being widely reported in the press as the death of the SOV. What the report actually says is that the IMF hopes that Parliament will kill the awful thing, and that the government is considering it:

Chang Huh, the IMF’s Executive Director for the Republic of the Marshall Islands, says:

The government conducted a comprehensive due diligence study on the SOV based on which the Parliament is considering repeal of the 2018 SOV Act. The authorities consider that the necessary developments in the legal and regulatory frameworks (including for AML/CFT) for the effective licensing and regulation of private virtual asset service providers are key pre-requisites for successful issuance and adoption of a digital currency.

The Marshall Islands remains in dire economic straits. Parliament has considered setting up a Digital Economic Zone, to give crypto entrepreneurs a regulatory haven and, hopefully, dribble a few pennies toward the Republic. This zone would be set up on Rongelap Atoll, a former nuclear testing site strewn with radioactive fallout — just the place to put crypto entrepreneurs.

The IMF warns that the Digital Economic Zone “could prove highly susceptible to illicit financial flows and activity” — ya think? — and the country doesn’t have the capacity to regulate the zone.

The IMF report is largely stick and no carrot. Their proposal to fix the islands’ economy is to liberalise and “reform” things, in some ill-specified hand-wavy manner.

The financial provisions of the Compact of Free Association with the US are being renegotiated, so that’s something at least.

The problem remains that the Marshall Islands and similar Pacific island nations are in dire financial straits. They aren’t stupid or dissolute — they’re desperate.

Seems like the kind of thing the Ballardian would want to get behind. A place where people could pretend to be Wall Street with variously imaginary monies in the shadows of nuclear testing; if they only drank Metropolitans it would be triply like, but not exactly, Manhattan.

5 Comments on “The Marshall Islands SOV cryptocurrency: the saga winds down”