Jemima Kelly at FT Alphaville has written the best available summary of what’s wrong with Civil, and why it won’t “save journalism.” None of this makes any more sense than it did in March. Not even “follow the money” — the token sale is such an inept failure (dig the simple 44-step purchasing process!) that Consensys has had to swoop in and buy 82% of the tokens. I don’t remember swearing in my quote — but if Jemima does, then I guess it’s on the blockchain now.

(I did yet another interview yesterday about blockchains in journalism. Blockchain is not a saviour of journalism, it’s a subject for journalism — desperate people, rescuers promising magic-based solutions, scams, fraud, victims …)

You are missing the meta-purpose. Civil has become a story in itself. Journalists will be compensated in CVL when writing about Civil on Civil. It’s great a great system, actually

A woman put CDN$62,500 in a Bitcoin ATM to send bitcoins to a phone scammer. Prince Edward Island provincial court judge Nancy Orr has ruled that Instacoin, the company who ran the machine, is not responsible, and gets to keep the cash.

All fiat deposits to Bitfinex have been suspended … after it came out that they’d been using HSBC, who seem to have promptly dropped them. Tether’s trading volume is also right down, and the dollar peg on exchanges with a USDT/USD pair is slipping.

Coinbase is shutting down its institutional crypto index fund, due to “lack of interest.”

Bitcoin’s first sidechain, Liquid, is finally active! Its function is to supply liquidity between exchanges — using a trust-based closed network. Because Bitcoin can only scale by not using Bitcoin. “An exchange converts its bitcoin into ‘LBTC’ – the liquid bitcoin token – which is pegged to actual bitcoin. Once sent there, exchanges can move money around securely and much more quickly than on the main bitcoin chain.” They also plan to run other financial instruments as tokens over this network. The obvious next step is to stop using the Bitcoin network itself for any of this. Frances Coppola details how this reimplements the interbank market — crypto recreates the existing financial system, but badly.

Today’s astounding project that is much less than it appears — Perlin aims to provide cloud computing, but on Android devices belonging to individuals in less-developed countries. This is not what I’d call a convincing pitch. The ICO hasn’t started. Nor is there third-party evidence of the claimed investments from Bitmain and Michael Arrington, let alone details as to what this backing constitutes. The interesting bit is that Perlin claims to use Avalanche, the new not-a-blockchain family of protocols that Emin Gün Sirer is developing. But Sirer’s team isn’t involved — Perlin took the Avalanche family white paper and say they’re making something a bit like it, sort of. Here’s the code. (HT Amy Castor, who passed on covering this press release.)

How hyperbolic crypto press coverage is generated. (I’m sure you can trust everything you read in TechCrunch.) From Thursday: 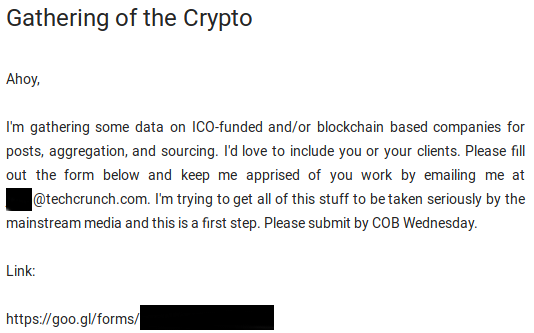 If Bitcoin mining stopped tomorrow, 0.5% of the world’s electricity demand would simply disappear — which would cover one year’s worth of the carbon emission cuts required to limit temperature rises this century to 2°C. Proof of work must die. “Bitcoin is made from ashes, and if ashes were legal tender, humanity would burn everything in sight and call it progress.”

More press quotes from me — a Yahoo News article on Voatz.

I’m doing a webinar with Ray Poynter of NewMR next month — What is Blockchain: a primer for market researchers — Tuesday 20 November, 3pm GMT (1500 UTC). Free, but please register. Must get my slides in …

There is video coming of the Royal Institution session from late September — to be up on the RI’s YouTube at some point. My intro was terrible, and I fumbled Sajida Zouarhi’s name twice. The question-and-answer session afterwards was excellent, however!

“Blockchain: hope or hype” with great guest speakers @davidgerard @Saj_JZ 👌🏾if you haven’t read David’s book by the way, it’s a must-read. Check it out: “Attack of the 50 Foot Blockchain” pic.twitter.com/LPaxyDlyfv

The WordPress theme on this site is A1, free version. It updated from version 1.6 to version 2.0 — which broke a pile of stuff, particularly on mobile. I’ve reverted to 1.6 for now, but staying on an unmaintained theme is a bad idea. I welcome your suggestions for suitable replacements.

Gaze not into the abyss, lest you become recognized as an abyss domain expert, and they expect you keep gazing into the damn thing.

One Comment on “News: What’s wrong with Civil, Bitfinex deposits suspended, Liquid is live, Proof of Work must die”