Last year, Everipedia decided to … go blockchain! It’s now one of the showcase apps for the EOS blockchain.

As far as I can tell, the bad encyclopedia is an irrelevant decoration — it’s all about the flow of Everipedia’s IQ Tokens, and the flow of EOS tokens.

The Wikipedia for being wrong …

Everipedia started in 2015. It claims to be the largest English-language encyclopedia in the world — because it started by copying all of Wikipedia, then added buckets of extra content that was well below Wikipedia quality standards. “Any source is valid, including Twitter, Facebook, Instagram, and LinkedIn.”

It specialises in low-quality articles about people who aren’t actually famous — but were momentarily in social media. The Outline called it “the Wikipedia for being wrong” — “the site has a pattern of creating erroneous articles for non-notable people that capture search traffic after tragic news events.”

The site’s high point was misidentifying the 2017 Las Vegas shooter, leading to a completely unconnected man being harassed by far-right trolls.

Everipedia also offered “Everipedia Plus” — to just straight-up sell “encyclopedia” pages on a sponsored basis. This was pretty much my Virgin Wikimedia Foundation proposal from 2006 — except I was joking.

… but on the blockchain

In December 2017, at the peak of the crypto bubble, Everipedia announced a blockchain-based encyclopedia, running on IQ Tokens.

The previous version of Everipedia used a points system. If you wrote an article and your edits were approved, you gained “IQ” points. When the site moved to its blockchain version, IQ points were converted to IQ tokens. Every editor on the site received an allotment equal to their IQ score on the site.

Here’s how the IQ token works:

Editors and curators will then “mine” that cryptocurrency by making accurate, valuable contributions to the encyclopedia. “Just like miners who find blocks get newly minted bitcoin, these editors who are voted to have a very good state-change proposal get newly minted tokens,” said Everipedia co-founder and white paper co-author Sam Kazemian.

Everipedia is working on its token economics with Dan Larimer, a founder of EOS — and architect of BitShares, which EOS is based on — and of blogging site Steemit.

Here’s Everipedia’s simple 16-part guide to editing on the blockchain — so much better than just hitting “Edit”.

10) Click your account name and select “GET BRAINPOWER” or “## BRAIN”. This will allow you to stake IQ for Brain Power, which allows for editing and voting.

The knowledge-related public face is Larry Sanger, who co-founded Wikipedia, left in 2002, and remains visibly annoyed that it kept going just fine without him.

Sanger was very excited by a blockchain model — mostly a fantasy version of “blockchain,” without any tedious technical limitations. He wrote extensive hypothetical rules for the site — under the apparent impression that it mattered if any of this worked.

Sanger’s track record with mapping out an entire encyclopedia bureaucracy from first principles is not so great — after he left Wikipedia, he spent a few years working out a detailed plan for Citizendium, which launched with great fanfare in late 2006 and had driven away most of its academic editors by late 2007.

The IQ Network launches on EOS

The IQ Network, the blockchain version of the site, launched on 9 August 2018. You can see the edits — there’s lots of copyright violations in Korean, and contributors who were previously banned from Wikipedia.

The old site was closed to editing on September 10 — all editing is now on the IQ Network site, using IQ Tokens. So it’s “Everipedia Plus,” but on EOS. At least the tokens are cheap.

The original plan for Everipedia was to use Ethereum, but instead they did it on EOS. Everipedia is an active part of the structure of EOS — Everipedia and Ikigai run LibertyBlock, one of the EOS block producers (what EOS has instead of mining).

Like any good ICO concept, the encyclopedia idea is bad and unworkable on multiple levels — but that’s fine, because it’s just a hook for the tokens.

Everipedia originally planned an ICO for the IQ Tokens — but instead got $30 million from a consortium that included venture capitalist Michael Novogratz, in by far its largest funding round.

Novogratz is a Wall Street hedge fund trader who’s made and lost a fortune in finance, twice. A few years ago, he got into crypto, per a profile in the New Yorker that is well worth your time to read:

Novogratz has certainly been making the most of the speculative bubble to rebuild his fortune, but he claims to be invested in the utopian aspects of blockchain as well. He doesn’t think that cryptocurrencies will replace the dollar or the yen, but he believes that they will be a boon to countries in the developing world, where people don’t have trust in their fiat currencies, and that blockchain can revolutionize the way information is logged and shared and, in our age of data breaches, protected. “I’m good at selling the dream,” he said. “I can get onstage and get people to start saying ‘Hallelujah! Hallelujah!’”

He was also a Princeton college roommate of Joe Lubin of Consensys.

Novogratz planned to form a crypto hedge fund in late 2017, after doing really well in the bubble — but called it off on 13 December, expecting crypto to crash. How’s that for timing?

He tried again in January, forming Galaxy Digital — intended to be a “best-in-class, full service, institutional-quality merchant banking business in the cryptocurrency and blockchain space,” and looking to be listed on Canada’s TSX Venture Exchange. Galaxy lost $134 million in Q1 2018, when crypto was busy going down the toilet. Galaxy finally got its listing in early August, after “frustrating” delays in regulatory approval.

On 23 January, Galaxy Digital and Block.one, who develop the software for the EOS blockchain, announced the $325 million EOS.IO Ecosystem Fund (archive) — the second of several such venture capital funds being put together by EOS.IO.

This press release was marked “NOT FOR DISSEMINATION IN THE UNITED STATES OR FOR DISTRIBUTION TO U.S. NEWSWIRE SERVICES” — because that totally keeps press releases geographically restricted on the Internet.

On 8 February, Everipedia announced the above-mentioned $30 million funding round — though it’s not clear if this was in actual dollars or cryptos. Sam Kazemian from Everipedia described it as an “equity transaction.” Investors included the Novogratz/Galaxy-linked EOS.IO Ecosystem Fund, Brock Pierce’s Distributed Network Advisors and unnamed others. It’s not clear if any of these received IQ tokens. 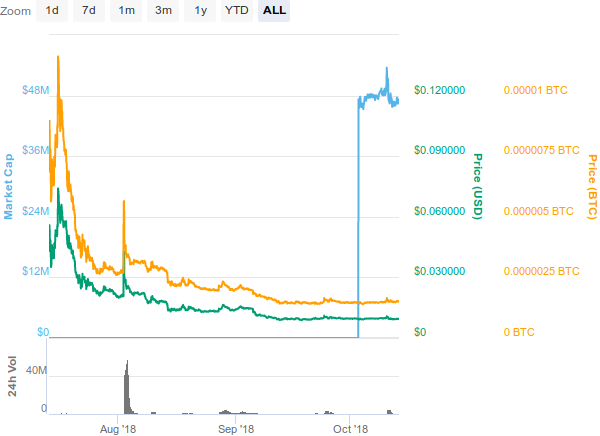 IQ token price on Coinmarketcap. The sudden market cap rise on 3 October is the site adding the amount in circulation.

How are the tokens doing?

The IQ token was airdropped — where you try to kickstart interest in your token by giving it away — to existing EOS holders in July 2018, once the year-long EOS sale had concluded. This meant that anyone who already owned EOS tokens got a proportionate number of IQ tokens — for free!

The Reddit forum and Telegram group had previously featured occasional discussions of encyclopedia content, but are now mostly concerned with the IQ token.

The token trades at around 1 cent, with around $0.5 million daily volume — not bad volume for a minor altcoin, though the price has been in a typical altcoin slow decline since launch.

The total issuance is 10 billion, so that’s $100 million of free money EOS has printed for themselves — and that’s the point of a token issuance. Though cashing out will be slow.

IQ tokens trade on several exchanges — but 85% of the volume is on UpBit, a South Korean exchange, where its only trading pair is with Korean won. This is also the only place you can exchange IQs for actual money, not just cryptos.

It’s not clear why it’s so big in South Korea — except for a lot of enthusiastic EOS traders in that country.

Everipedia is not going to revolutionise the world of knowledge production. It will not escape its previous reputation as a less bigoted and profanity-laden Encyclopedia Dramatica through the power of weird blockchain economics, even with a famous ex-Wikipedia name attached.

The token is unlikely to go to the moon, though at least it’s traded on an exchange that you — or Everipedia — might be able to get actual money out of.

It’s not clear the venture capital backers are going to turn a profit on this one. But Everipedia staff wages will probably be paid a bit longer. And there’s the new Stockholm office to fund.

Thanks to Amy Castor for edits.