The mainstream press writes about changes in the price of Bitcoin as if the crypto market is rational and things happen in response to market signals — rather than because of a great big thumb on the scale.

The Bitcoin price in dollars went up, uP, UP! on multiple exchanges today!

Unfortunately, on many of those exchanges, the price is actually in substitute-dollars called tethers (USDT) — and the tether crashed this morning. This looks very like a bank run, on Tether.

What is Tether, and why are people worried?

Tether is a “stablecoin” that is supposedly pegged to the US dollar. Its purpose is to flow between exchanges easily and quickly.

One purported purpose is so that you can arbitrage between exchanges — altcoin prices are very unstable, but something that has a stable value would be useful. Some traders use it as a hedge in volatile markets.

The purpose in practice is so that questionable exchanges can trade in “dollars” without all that tedious mucking about with KYC/AML and banks. Tethers are the usual “US dollar” on the sort of exchange that never saw an altcoin it didn’t like.

Tether is the main source of liquidity in crypto trading. Of daily trades to and from “dollars,” 80% can actually be tethers.

There have been long-running concerns over Tether — ever since they started releasing extravagant quantities of tethers last year. Issuance at 2 April 2017 was 55 million tethers — issuance today is 2.5 billion. Supposedly backed by $2.5 billion in cash … somewhere.

Tether’s front page (archive from this morning) still claims that “Our reserve holdings are published daily and subject to frequent professional audits.” But Tether has never released an audit, and their last proper accountant quit before completing an audit.

Tether have since claimed it would not be possible to audit Tether. “The bottom line is an audit cannot be obtained. The big four firms are anathema to that level of risk,” said Stuart Hoegner, Tether’s general counsel.

It seems impossible to cash out tethers to actual money. Many have tried, and some claim they know someone who managed it — but there are no confirmed reports. Tether tell users to sell their tethers on one of the  exchanges that use it.

I recommend Amy Castor’s Timeline of Tether and Bitfinex Events from February. (Which is getting an update shortly!)

Many suspected for months that Tether releases were timed to pump the Bitcoin price — and John Griffin and Amin Shams at UTexas Austin showed that it was all but impossible that this was coincidence. The evidence is statistical — but it’s glaring.

The pumps have been less and less effective, though — over half a billion new tethers were issued in August 2018, and what did they get out of it? A temporary $600 pump in the price of Bitcoin.

Frankly, I’m amazed the market priced these things at about a dollar as long as it did.

Tether is owned and run by the same team as crypto exchange Bitfinex.

Per chapter 8 of Attack of the 50 Foot Blockchain, Bitfinex lost their US dollar banking in April 2017, as Wells Fargo, the correspondent bank for their Taiwanese banks, refused to transmit their bank wires from Taiwan to the US.

This came eight months after Bitfinex was hacked, in August 2016, losing 120,000 bitcoins. They applied a 36% “haircut” to all their users — and made this up with “BFX” tokens, each notionally worth one dollar. In April, they announced they had fully made their users whole from the haircut! … by giving them tethers for each BFX.

Bitfinex/Tether’s banking since then has been … ad hoc. They seem to form shell companies for their inflows and outflows of conventional currency. Once one is cut off, they go to another.

Occasionally they seem to run out of banks. Cash deposits and withdrawals were temporarily cut off in June, for example.

They had an apparently-safe bank for a while — Noble Bank, in Puerto Rico. This was founded by the same team, led by Brock Pierce, that founded Tether. (And also attempted to buy out the Mt. Gox exchange a few years ago.)

However, Bitfinex banking at Noble came to light, and they left shortly after. Noble has also had a bit of a revolving door for senior staff.

Each time Bitfinex lose banking, their users play Tether roulette — is this when the music stops? Or will it start again?

On crypto Twitter, Patrick McKenzie sets out some possible bad ends for Tether:

Eventually, a bank or, more likely, a regulator is going to say “Actually this doesn’t look like a legit deposit that we’re uncomfortable with supporting due to AML/regulatory reasons. It looks an awful lot like proceeds of crime intermingled with grey money.”

And the terrifying outcome, from the cryptocurrency economy perspective, is the regulator doing what the USFH did with respect to Mutum Sigillum (Mt Gox’s US front): “OK, we’re going to give you two choices.”

Door #1: Prove that it’s legal money. This should be trivial for you because KYC is the law and your compliance should be automatic. So have your lawyer suit up. BTW we expect this to take 3+ years.

Gox’s bankruptcy administrator took the haircut. That was an eminently sensible call.

I think there is a material risk that Tether absorbs a billion dollar hair cut.

The cryptocurrency economy relies on Tether, specifically, far more than the global financial system relies on money market funds. It has convinced itself that they’re equivalent. That is wrong. It has always been wrong. It may soon be experimentally disproven catastrophically.

Most recently, last week Bitfinex were discovered to be using an account at HSBC, under the name “Global Trading Solutions.” That’s the HSBC who were fined 1.9 billion dollars in 2012 for blatant money-laundering for drug dealers, and are a favourite example for bitcoin advocates of how corrupt the existing banking system is.

As it turns out, HSBC doesn’t seem to want to deal with crypto either — shortly after that story appeared, Bitfinex suspended all cash deposits.

This is when the market finally started losing faith in Tether.

Tether: The music stops for a moment

Tethers are supposedly pegged to the dollar. Since Tether don’t seem to accept tethers for cash, this appears to be done with trading bots on the few tether-to-dollar trading pairs, on exchanges such as Kraken.

Weird things started happening with Tether in late September — monthly trading volumes were the third biggest since its creation, higher than the peak of the crypto bubble in December 2017 and while bitcoin and ether volumes were still down:

1/ While cryptocurrency trading volumes continue to decline amid the bear market, Tether recorded higher volume in September than it did at the peak of the bull market in December. pic.twitter.com/bXtxIzfmK0

Tether’s dollar peg started slipping in early October. This was first visible against other US-dollar-backed stablecoins — ones which, unlike Tether, had passed audits: 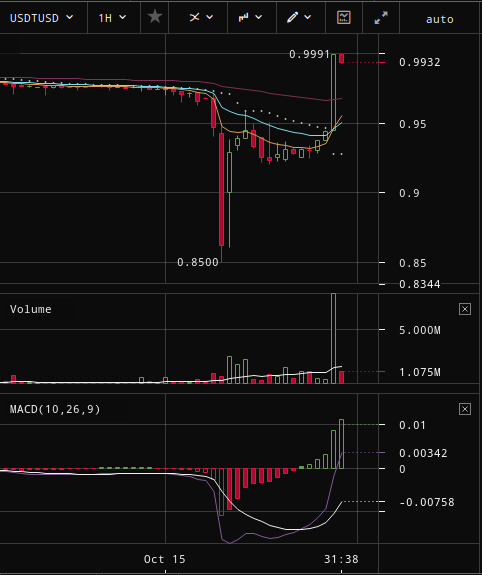 The market is not entirely sanguine. The price of Bitcoin is going up proportionately on Tether-dominated exchanges — untether.space is a website showing the risk premium between Tether and non-Tether exchanges.

This includes Bitfinex. If you could get cash out of Bitfinex — as they claim you can — there wouldn’t be a price premium — large traders would be taking the free money.

Izabella Kaminska at FT Alphaville wrote up some historical context for tethers — they’re a crypto equivalent of Eurodollars, a similar sort of dollar substitute used to trade without going via the US. Everything was fine, fine with Eurodollars until the 2008 financial crisis — when it turned out a lot of them weren’t covered, and the US actually had to bail the issuers out. I suspect the US won’t be doing the same for tethers.

Update: Of course someone else cashed out that $8m pump straight away: 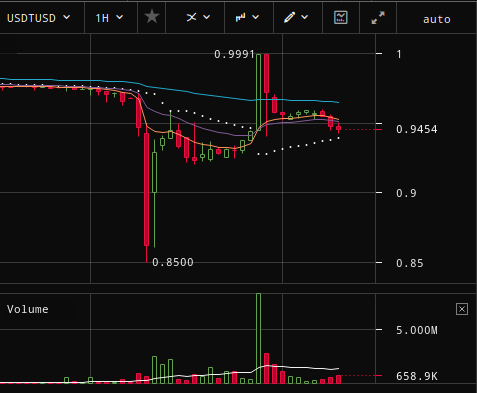