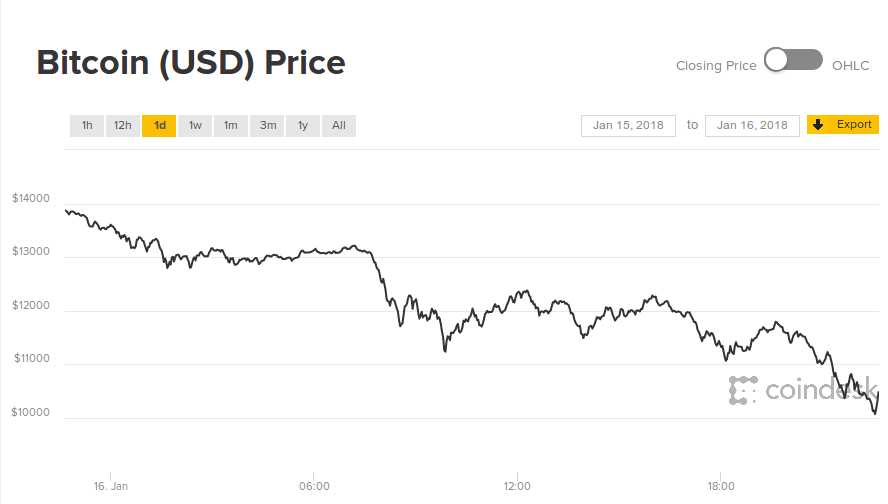 The price started collapsing this morning. I’m not going to be so foolish as to call it, but looking at the reactions from horrified December buyers of Bitcoin, I am saying “I told you so” — the only actual money people will get out is actual money that other people put in. And the exits are congested.

This crash didn’t just happen — it appears to have been provoked by a pile of fake sell walls, such as a large spoof order at $12,000 that disappeared as soon as the price approached it, and another at $11,000. If this isn’t our friend “Spoofy”, it s a close relative.

(This sort of glaring manipulation is ridiculously illegal in real securities trading — but welcome to Bitcoin.)

The cryptocurrency “market cap” showed itself as complete illusion, a bad and useless marketing number that you should never pay any attention to. What happened to all that value? The answer is: it never existed.

(That altcoin bloodbath is not quite as bad as it looks. Altcoins tend to track the price of Bitcoin, rather than the US dollar, because almost all of them can only be traded for other cryptos — which is why CoinMarketCap charts altcoin prices against BTC as well as USD. But this is why there’s not really such a thing as a “diversified portfolio” of cryptos.) 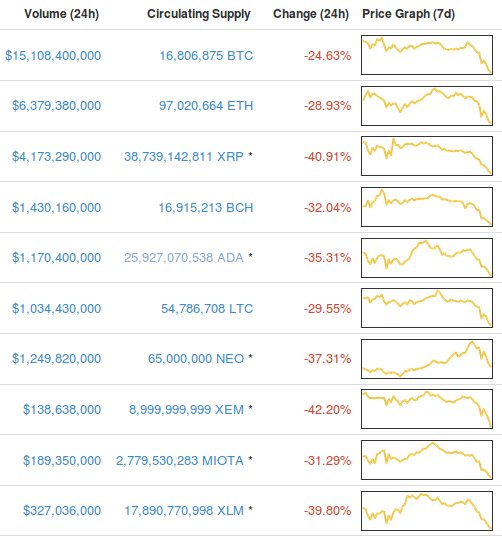 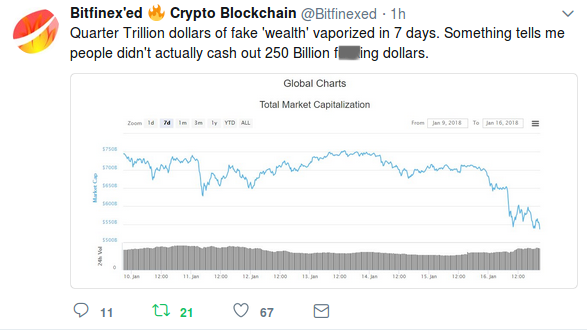 the @coindesk price chart page is not doing so well pic.twitter.com/arI38PbqHE

The day of the 2013 crash, it was Reddit /r/bitcoin that pinned a link to a suicide hotline to the top of the forum (per chapter 4 of the book). This time, it was /r/cryptocurrency. They didn’t actually pin it to the top, but it was the top unpinned post:

Around 22:30 UTC, another 100 million Tethers showed up, after 150 million yesterday — every single one no doubt backed by a genuine US dollar in a bank account:

The tethers pushed the CoinDesk average price back over $11,000. So I’m sure it’ll all be fine by tomorrow! 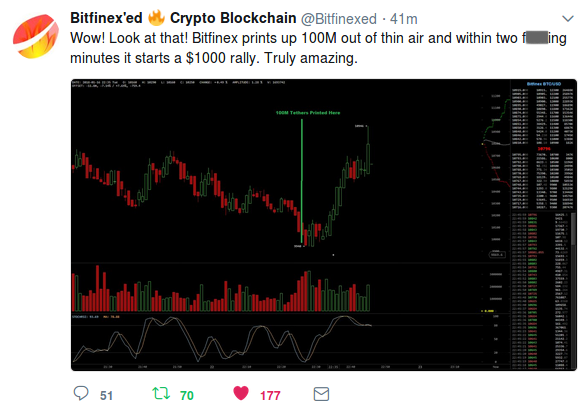 Right now I’m listening to CryptoWorldNews on Twitch, which has its greatest listener numbers of all time, helped by @ButtCoin linking them. It’s the financial equivalent of listening to very detailed and erudite pseudoscientists, talking about how to correctly align your chakras with your body thetans while Mercury is in retrograde. “This is a bloodbath today … and also the best time to buy!”

seriously my fellow buttcoiners, https://t.co/pP1Lg3L1yp is the Comedy Gold channel. Hilarity to listen to, and the troll box at the side is even better. Of course these bozos are telling everyone to BUY and HODL

hello bank how do I short btc

also can you explain what short means

8 Comments on “‘Tis just a seasonal dip! Watching the Bitcoin fire from a safe distance — what just happened”