The cryptocurrency world has always revolved around one fundamental promise: you too can get rich for free! Just send us your dollars, and we’ll send you magic beans. Watch them go up in value (on paper). Soon you’ll be rich, like us. We’re just letting you send us money ‘cos we’re nice, see.

Crypto boosters often drive flashy cars and live in flashy houses to show you how rich you could become. (We saw these in the crypto piece from 60 Minutes Australia that David was in last Sunday.) [YouTube]

The trouble is that there’s no get-rich scheme that’s real, because magic doesn’t happen. And the suckers sort of realise that. So the excuse has to change regularly to tap into a fresh pool of suckers — and a fresh pile of scarce actual-dollars fed into the cryptoverse.

This has been the case all through Bitcoin, altcoins, initial coin offerings, NFTs, and the many smaller crypto grifts along the way. Draw the crypto speculators in; try to draw the general public in. Throw memes at the wall to see if they stick.

And here we have a shiny new meme: “Initial Game Offering.”

Coined in the wake of the media coverage of play-to-earn (P2E) game Axie Infinity, the phrase “Initial Game Offering” (IGO) is an attempt to create the next crypto grift after NFTs. Or at least extend the NFT grift for a while.

IGOs are probably not a happener, though — any more than the rest of play-to-earn ever was in reality. 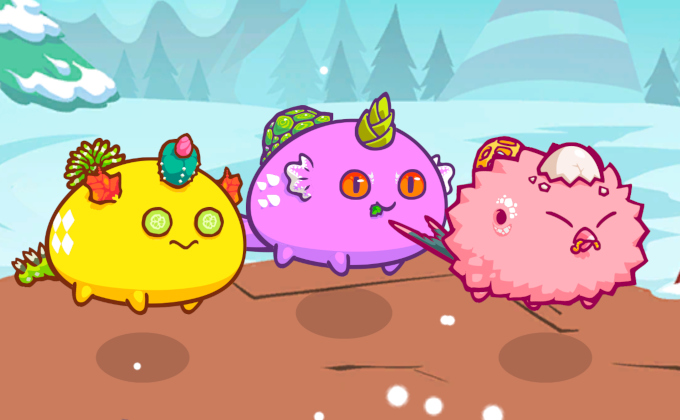 What is an Initial Game Offering?

An Initial Game Offering raises money for an early stage play-to-earn game. The idea is similar to ICOs. An IGO lets you pre-purchase a game’s in-game tokens (generally NFTs) before the game goes live, before any development has begun, or when the product only exists as a bubble in someone’s head. Just buy the tokens, OK?

Game assets offered in an IGO range from characters to skins, weapons, accessories and mystery boxes. These assets are represented by NFTs. The tokens are often required to access the game.

If the game becomes a huge success — and the only play-to-earn game that has ever had any success at all was Axie Infinity — the tokens surge in value, and you get rich for free! In theory, anyway.

The promise is always the same — buy our tokens and, once the game goes mainstream, you will become fabulously wealthy.

It’s easy to use the “Initial Something Offering” template to claim you’ve innovated a new form of magic bean to speculate on. Past examples include “Initial Exchange Offerings” and “Initial Security Offerings,” and some even tried to make “Initial DeFi Offerings” a thing. The middle word changes, but the phrase can always correctly be read as “Initial Sucker Offering.”

Art NFTs have fallen by the wayside. Collectible NFTs (CryptoPunks, Bored Apes) were big in 2021, but the speculator market has cooled for them as well.

But we don’t think the NFT hype train is stopping any time soon, despite the lack of any evidence of public interest outside crypto speculators — there’s still just too much money flying around.

We think the grift is evolving, and putting “Web3” (whatever that is) into gaming is the next focus. IGOs are part of that, but it’s a term that’s being pushed by the Binance crypto exchange, and not really by any of the other big players. It’s a little too cringy for Andreesen Horowitz (a16z) to capitalize on. But you can find other takes on the idea.

Bored Ape Yacht Club did a huge land sale for their Otherside virtual world in late April — they were selling NFTs for a game that doesn’t exist yet, with the pitch “get in early.”

The new Salesforce NFT cloud sort of leads in this direction — where Salesforce tries to sell you a platform that you can sell NFTs on. We’ve also seen the term “Initial NFT Offering” being thrown around in the scope of NFTs used in games. [Techcrunch; GameFi Boost]

How IGOs got their start

In June 2021, Axie Infinity was starting to get significant mainstream press coverage as an alleged use case for blockchain. By August 2021, play-to-earn was the new craze in crypto, especially amongst investors who’d bought into Axie — including Reddit co-founder Alexis Ohanian, billionaire investor Marc Cuban, and a16z. The cute little Axie characters in the game are represented by NFTs, and you need to own — or rent — at least a few to start playing.

Binance launched its NFT marketplace in June 2021. DeRace, a virtual racehorse platform, was the first game NFT offering to use Binance’s NFT platform. The promotion for DeRace, starting on 20 August 2021, is the first example we’ve been able to find of the phrase “Initial Game Offering” in the wild. [Medium]

DeRace describes itself as: “A complete NFT horse racing ecosystem where you can participate in horse races, breed NFT horses with unique characteristics, host races in your own NFT hippodrome and earn profit while doing it.” OK.

Within weeks, the phrase “IGO” had taken off — at least in bottom-of-the-barrel crypto blogs whose audience is only the most dedicated of crypto suckers doing their own research.

(Researching this section of the crypto media sphere is very like trash diving for the right piece of worthless trash.)

After this, the coverage has aimed to promote the concept to speculators, and latterly to aspiring token issuers.

Two weeks after the DeRace announcement, Altcoin Buzz ran a video on 4 September, touting IGO as a “MAJOR CRYPTO TREND!” You definitely need to get in now! [YouTube]

An advertorial in HackerNoon dated 6 October 2021 advises you on how to pick a sound IGO to invest in: [HackerNoon]

At the end of May 2022, CoinTelegraph published an explainer in their “Funding for Beginners” section, which is absolutely marketed to the sort of sucker who thinks they’re the scammer: “A beginner’s guide on launching an IGO.” [CoinTelegraph]

Binance’s CoinMarketCap promotes “Initial Game Offering (IGO) launchpads” as “the latest trend in the crypto world” — literally promoting this to aspiring suckers with fear of missing out. [CMC]

In a burst of crypto media quality we didn’t expect, the forced meme of IGO hasn’t made it into CoinDesk or The Block.

Articles on blockchain games assume that play-to-earn games are a thing, that they’re hugely successful, and that this is the future of gaming!

None of this is true.

We’re working on an albatross of a writeup of Axie Infinity, which explains how:

This is a graph of trade volume for gaming NFTs, compiled by The Block, using data from Cryptoslam. The red is Axie Infinity. The entirety of the rest of this alleged “sector” is lost in the noise:

The play-to-earn sector was Axie. It was only ever Axie, and Axie’s been in the toilet since late 2021.

“IGO” hasn’t caught on in the cryptosphere — let alone the mainstream — and big investors like a16z haven’t adopted the buzzword. Binance and a few other startups are still trying to make it a thing, and push the “metaverse” angle.

We predict that Initial Game Offerings will continue down in the sumps and sewers of the crypto sucker market. But IGOs aren’t nearly stupid enough to take the crown as the successor to NFTs. We have to go dumber.