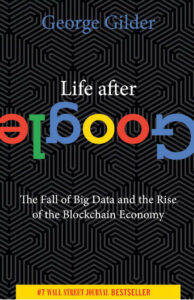 In December 2018, David Golumbia, author of The Politics of Bitcoin, posted on his Facebook about the new book Life After Google: The Fall Of Big Data and the Rise of the Blockchain Economy (Regnery, 2018) by George Gilder.

As it happened, a friend who was a Gilder fan had asked what I thought of Gilder’s ideas on blockchain. So I got a copy of the book and dived in, and proceeded to liveblog it in David’s comments.

David asked if I’d like to write up the comments as a book review for Boundary 2, a literature and culture journal that he’s an editor on. Sure! Then I took … three and a third years to get it finished up and submitted.

(This post about Nick Szabo is an offshoot of this “albatross of a book review.”)

It turns out that Münecat had read Gilder’s book for her blockchain video “Web3.0: A Libertarian Dystopia.” [YouTube] I cleaned the review up a bit, sent a copy to Münecat, then realised I should probably finish this thing for David.

The review is finally up on the b2o Review, the non-peer-reviewed section of Boundary 2 Online. So I don’t have an peer-reviewed credit to my name — but I did take three years to get it in, which is in proper academic style. And you think my piece for you is running late. [Boundary 2]

The review is nine thousand words. But it’s considerably more coherent than the book, because I had an editor.

The theses of Life After Google are:

That last is because Gilder is a creationist — someone who thinks biological evolution is wrong for religious reasons — and indeed founded creationist think-tank the Discovery Institute. Gilder heavily promoted the completely bogus “information theory” argument for creationism.

I take Gilder seriously as a technology pundit because he knocked the ball out of the park with his 1990/1994 book Life After Television — where he first did his real trick, which is to introduce a shock dose of historical materialism to conservatives enamoured of the Great Man theory of history. He also predicted iPhones in remarkable detail. You could say anyone could have, but he in fact did.

Life After Google puts itself forward as more of the same, but doesn’t really make it. Particularly when he claims that mathematics proves his religious views.

Regnery started as a small conservative political press. These days it’s increasingly a vanity press for the weirder end of the right wing. Gilder is a writer who respects words and discourse — but the problem is that Regnery seem to have forgotten how to edit a book. This could have been a much better book with someone daring to tell Gilder when he wasn’t landing his arguments, or was going off the point for extended periods. I’d still think his theses were wrong, but it’d be clearer.

Peter Thiel and Gilder are great fans of each other, and this book has informed the thinking of at least some billionaires about blockchains. It may be useful to keep up with what they’re taking in. Other than that, I can’t see any reader of this blog learning anything new or useful from it. Read my review instead — I read it so you don’t have to.

4 Comments on “Boundary 2: Creationism on the Blockchain — review of George Gilder, Life After Google”