This is a satirical post that Trolly McTrollface wrote on his blog. His hosting service got a spurious copyright complaint about it:

The post itself doesn’t violate copyright, and the laser eyes version of Hoegner’s image in the header is clearly fair dealing in any reasonable sense in most EU jurisdictions. But Trolly doesn’t have as much time on his hands as the Tether crew do: [Tr0lly]

I’ve taken down this post after a complaint has been filed with my hosting service You can find its contents on my Medium account, and judge by yourself I am indeed “systematically harassing executives and employees of the company Tether and Bitfinex”.

While I disagreed with Tether’s request (I presume it was them), I don’t have the time to play these games (they obviously do).

So I put up a copy here. I dealt enough with this sort of nonsense back in the late ’90s to know precisely what to do in these cases: if someone tries to bully a post off the net, you put up a buttload of copies. [Australian Critics of Scientology Resource Collection]

You should feel free to put one up as well. Here are others: [write.as; Amy Castor; GitHub] 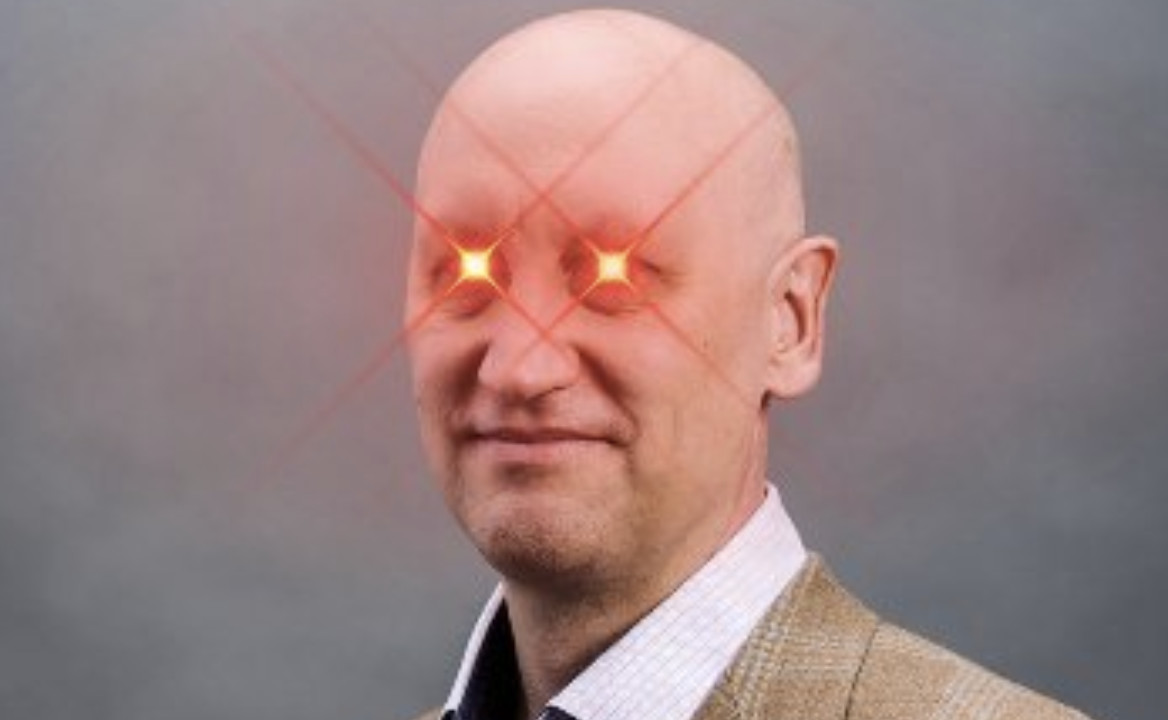 In light of an anonymous Medium post titled “Tether is Setting a New Standard for Transparency — And Responding to Criticism That is Untethered From Facts”, written by someone posturing as Stuart Hoegner, the GC for Tether, in a something that looks like pointless attempt to make Tether look like a legitimate business, the truth needed to be told. So here it is, in all its unvarnished glory. A tale of how it all happened.

The morning sun was gently piercing through the mist glowing around the harbour. Suart Hoegner was standing by the window, his empty stare aimlessly fixated on the horizon.

The coffee cup was sitting on the window sill, untouched, its contents getting cold. Stu was feeling much like that cup, isolated, forgotten, the fire inside of him running out.

What had happened to his dreams? Where was his ambition gone? How did he ever end up in this dead end of a situation, catering to small time Italian crooks, lending them his name, his expertise, his reputation, his life?

The people at Deltec would be at the office an hour from now. The Bahamas was in the exact same time zone as Prince Edward County, but what looked like a huge convenience in 2017, when Stu had started working out the relationship, felt like the shackles of a prison four years later. At least Paolo Ardoino was commuting between Monaco and London, leaving five hours of alone time to Stu in the evening when he could try and recollect. Giancarlo Devasini, the international man of mystery and Stu’s boss, was popping up here and there sporadically around the world, mostly leaving Stuart alone. But Deltec! These guys were non-stop. Amateurish, overzealous, excited and afraid at the same time, they’d call him a dozen times over the span of a single hour for utterly mundane shit like a weekend wire. “We can’t do this, we can’t do it like that, the ISIN code you provided for the bond you say you have on your books doesn’t exist, this commercial paper isn’t rated…”

Stuart closed his eyes, and let out a deep sigh.

He kind of knew what he was signing up for, when he shook hands with Giancarlo and Paolo, that fateful evening at a gaming conference in Toronto.

When you’re a regulated financial institution, you’re dealing with the cream of the crop, you have to prove that you’re trustworthy and beyond reproach to the most sophisticated players. You’re in the limelight, you brush elbows with legends, you dine with intellectuals and people who will leave a mark in this world.

But Stu knew he was never going to be up to that level. Stuck in a tiny practice catering to the gaming industry, he was doomed to a life of absolute insignificance and quiet desperation. So he jumped ship, to the gutter.

When you’re an unregulated bucket shop scalping muppets, posturing as a revolutionary blockchain fintech something, you never see the limelight. Your job isn’t to compete with the top 0.01%, it’s to baffle and bamboozle the bottom 50%. Instead of having fifty accounts worth $100,000,000 each, you’ll have to deal with a hundred million accounts worth $50 each. You’ll become a joke among your former colleagues, nobody will write to you for a recommendation, your own mom will stop asking how the job’s going.

A tear rolled down Stuart’s cheek.

He was stuck playing Laurel and Hardy with Paolo, to keep the appearance of legitimacy and technological innovation for Tether, in the eyes of a million suckers who were bagholding their shittoken, USDT. Stu’s job was to make sure Tether’s employees and accomplices would never say or write something that might incriminate his employer, always keeping a veneer of plausible deniability in the eyes of the law, all the while appearing strong and legitimate in the eyes of the illiterate cannon fodder.

Twitter was a perfect tool. At the head of an army of anonymous bots, Stu could post bullshit memes and retweet crazy-ass conspiracy theories that made Tether look good. Unable to provide a real audit or any report that would make sense in the real world, he would come up with one worthless attestation after another, drafting legally non-binding opinion letters to be signed by obscure accounting shops.

And then one day, his boss came up with this “Tether leaks” idea, to discredit Tether critics, who could see through the nail-polish-thin Potemkin façade that Stu had set up, and deemed it worth their time to warn others. Giancarlo instructed Stuart and Paolo to write a series of supposedly leaked emails from Deltec that would be revealing of Tether’s fraud, and post them on Twitter, for critics to bite on. They could then reveal that the emails were fake, and that anyone who believed in them was an idiot unworthy of being attention to.

This was the straw that broke the camel’s back. Stu was stuck forging documents, setting up fake Twitter accounts, and fishing for journalists to take the bait. This was one step too far off his idea of what a legal counsel was supposed to be doing. And to be exposed by an anonymous account going by the name of Trolly McTrollface!

Something broke inside him that night. The light went out.

Suddenly, a sunbeam broke through the mist, and hit Stuart’s face. Even with his eyes closed, he could feel the warmth on his face, and let himself bask in this uplifting feeling. A wave of rage and inspiration suddenly crashed up on him. His hands started shaking, as a supernatural force was taking control of his thoughts and movements.

Stuart rushed to his laptop, and started typing. He typed like never before, like he never could. For a moment in time, Stu was transported in a parallel universe, one where he was an actual big boy lawyer, working for a legitimate business, where he could say and write words that had real meanings. A world where his own existence had a meaning.

In accordance with the International Auditing and Assurance Standards Board (IAASB).

The vast majority of the commercial paper we hold is in A-2 and above rated issuers.

The commercial paper we hold is purchased through recognized issuance programmes.

The lion’s share of our bond portfolio is investment grade as rated by S&P, Moody’s, or Fitch.

When he was done, the sun was high in the sky, and his phone showed fifty seven missed calls. It was like a hole in the continuum of time had engulfed him, chewed him, and spat him out. He was shaking, drenched in sweat, heart racing, his vision blurry.

He tried to read what he had written.

It was beautiful. A vision of a world that wasn’t bullshit, scams, and shame. A world that would never exist anywhere else, but on those two pages of his own creation.

Stu needed to put it out, put in somewhere others could read it. He couldn’t post it on his own Twitter account. He couldn’t even admit or deny that it was real or fake. Plausible deniability, all that stuff.

He created a new account on Medium, and copy-pasted it there, in all its glory. Then he dropped a link to Paolo.