Tether Inc. issues a dollar-substitute crypto token, also called tether (USDT). Most crypto trading is against tethers, not dollars. Each tether is supposed to be backed by a dollar held in reserve. Tether has been spewing out tethers by the billions since March 2020, just as the price of Bitcoin needed pumping.

(If you want a basic explanation of the problem with Tether, Patrick McKenzie’s is still the best.) [Kalzumeus, 2019]

Tether has been caught lying about its reserves previously — it issued tethers in 2017 when it literally didn’t have banking — and was investigated by the New York Attorney General. Tether’s settlement with the NYAG in February requires, among other things, that Tether publishes a breakdown of its reserves at least quarterly.

A report that claims to be a breakdown of Tether’s reserves dropped at 12:00 UTC Thursday 13 May 2021, outlining the reserves as at 31 March. [Twitter; press release; reserves breakdown, PDF]

I’m analysing Tether’s numbers on the assumption that they aren’t just made up, and mean something in any conventional sense. It’s reasonable to doubt this — Tether’s been caught directly lying before — but previous Tether numbers have tended to have some sort of justification, if only a laughably flimsy one that meets no accepted accounting standards.

What Tether has to publish

It is not clear that Tether is putting forward this document as a publication that satisfies the settlement with the NYAG.

The precise wording of the settlement is: [settlement, PDF]

Publication of Tether’s Reserves: On at least a quarterly basis for a period of two (2) years following the effective date of this Settlement Agreement, Tether will publish the categories of assets backing tether (e.g., cash, loans, securities, etc.), specifying the percentages of each such category, and specifying whether any such category constituting a loan or receivable or similar is to an affiliated entity, in a form substantially similar to that previously presented to the OAG.

The “affiliated entity” bit is because part of the backing was previously a loan by Tether to its sister company Bitfinex, a crypto exchange — though this loan functionally resembled plugging a cash-flow shortage at Bitfinex with dollars from Tether, after a pile of Bitfinex’s cash held at Crypto Capital Corporation in 2018 was frozen by the authorities.

The settlement includes a separate requirement to supply more detailed information to the NYAG, but the list above is what Tether has to make publicly available.

“Tether proposed ongoing publication of the reserve breakdown as part of our settlement agreement with the New York Attorney General’s Office, and we committed to make that information available to both the Attorney General’s office and the public,” said Hoegner. “Today’s publication reflects our ongoing dedication to transparency and setting the standard in our industry.”

Hoegner does not say that this particular publication satisfies that agreed requirement, or that it has been published in order to do so.

Does nine lines of text on two pie charts satisfy the agreement with the NYAG?

The document is, literally, a single-page PDF with two pie charts. Apart from a header, this is the entire content: 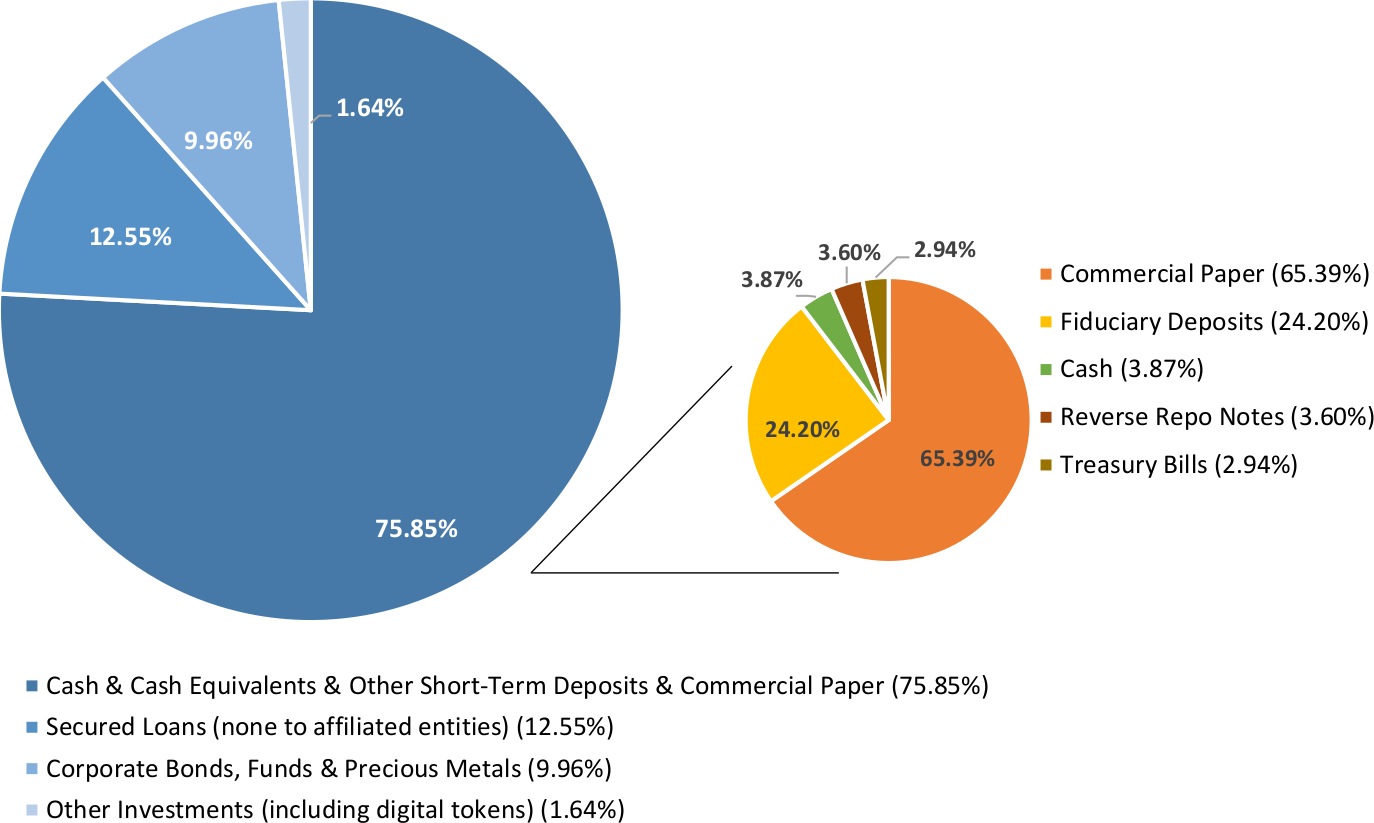 That’s it. That’s the whole report.

This is as skimpy as it looks. All the trickery is in the labels.

“Secured loans” will have some sort of collateral — which could be anything at all. “Corporate Bonds, Funds & Precious Metals” is not a standard accounting grouping, and, again, needs much more detail. The “digital tokens” are bitcoins, Hoegner tells The Block. “Other investments” could be anything.

This would be a nice diagram to summarise a much longer report — but Tether forgot to include the report.

Treasuries generally count as cash, so that’s another $944 million.

“Fiduciary Deposits” would appear to mean “money in a bank somewhere” — $7.774 billion. They still don’t say where these banks are — or if they’re even banks, as Crypto Capital Corporation wasn’t. (One bank is known to be Deltec, in the Bahamas — but the whole Bahamas doesn’t have enough bank deposits to back all of the tethers.)

“Readers should not confuse items not in ‘actual cash’ with a lack of liquidity,” Hoegner told The Block.

The largest part of the reserve — 49% — is commercial paper.

“Commercial paper” is short-term debt issued by a corporation. It’s a money market security, sold by a large corporation to meet short-term obligations, such as payroll. It’s not backed by anything — only a promise to pay the face value when it matures.

Tether explicitly says the “loans” are not to related entities, such as associated company Bitfinex. They do not say this about the “commercial paper”.

Did Tether refinance their previous loan to Bitfinex as commercial paper, which they then don’t have to state is a loan to an associated entity?

Hoegner refused to give any details about the commercial paper to The Block.

What on earth is a “reverse repo note”?

In finance, “repo” is short for “repurchase agreement,” a form of very short term loan — you sell a security and buy it back shortly afterwards (usually the next day), at a slightly higher price.

A “reverse repo” is the other end of the same deal — you buy a security and sell it back at a slightly higher price.

There is no such thing as a “reverse repo note.” This appears to be a term made up for this report.

Martin Walker says: “A reverse repo is where you have lent cash in return for receiving collateral, usually bonds. I’ve never heard of a Reverse Repo Note before, and I am the product manager for a couple of repo trading systems and used to run repo technology at an investment bank.”

Anyway, Tether claims to have $1.156 billion worth of these.

Does this report mean anything?

This report was released after Elon Musk tweeted on Wednesday 12 May that Tesla was pulling out of Bitcoin, [Twitter] and the BTC price crashed.

Zhao Dong — founder of over-the-counter crypto exchange RenrenBit, a Bitfinex shareholder, and a major backer of past Bitfinex/Tether initiatives such as the LEO Token — also pleaded guilty to money laundering yesterday, on Wednesday 12 May. [Protos]

This report could have been released now to give the Bitcoin maximalists something to wave to claim that Tether is fully “backed,” in some sense — though neither this nor previous attestations (for February and March) show anything of the sort.

Frances Coppola comments: “That asset structure looks awfully like the asset side of bank balance sheets prior to Lehman. There was a run on asset-backed commercial paper in August 2007 after BNP announced it couldn’t price the mortgage-backed securities backing the commercial paper. That was the proximate cause of the failure of Northern Rock.”

It’s also not at all clear that the present publication satisfies the NYAG’s requirements.

There’s an important thing to keep in mind: the Tether reserve doesn’t do anything. Tether:

Tethers are functionally-unbacked pretend dollars, being pumped out by the billions.

Tether’s immediate market of bitcoiners doesn’t care, as long as number goes up. The scam is pumping the price of Bitcoin to get retail dollars from ordinary people who think this is a real market.

All of this flurry of non-audit attestations and press-release reports is handwaving. The only thing Tether has to do is satisfy the requirements of the NYAG settlement. And they still have a few days for that, if nine lines of text and two pie charts isn’t sufficient.

Kyle S. Gibson tweeted this two weeks ago, and got it completely right:

4 Comments on “Tether publishes … two pie charts of its reserves”