I Don’t Speak German is a podcast about neo-Nazis and white nationalists, secondarily covering the “alt-lite” and Intellectual Dark Web insofar as they launder the same ideas. It’s one of the two podcasts I listen to every episode of. (The other is A History Of Rock Music in 500 Songs by Andrew Hickey, which you should also listen to every episode of.) [IDSG; 500 Songs]

I knew Daniel Harper from IDSG and hung out in the podcast’s Discord chat, but we first spoke specifically about neo-Nazi use of cryptocurrencies for my Foreign Policy article on the Christchurch neo-Nazi massacre in 2019, because the shooter claimed to have made money in cryptos.

Daniel and I idly discussed covering Bitcoin Nazis on IDSG at some point; and after the massive December 2020 Bitcoin donation from Laurent Bachelier to some US neo-Nazis came to public notice in January 2021, we scheduled this recording.

Jack Graham, IDSG’s co-host, is a Marxist who co-wrote a history of Austrian economics for Elizabeth Sandifer’s book Neoreaction a Basilisk (UK, US) — which I was also heavily involved in. So I really wanted him along for this one.

This podcast is not about Bitcoin — it’s about Nazis. Bitcoin is not a neo-Nazi subculture. But neo-Nazis like Bitcoin, ‘cos they keep getting kicked off the actual-money payment processors. Unfortunately, their information security is comically terrible.

We start with a plug for Libra Shrugged. There’s my usual plug for David Golumbia’s The Politics of Bitcoin (US, UK), which I cribbed heavily from for chapter 2 of Attack of the 50 Foot Blockchain. I recommend John Bambenek’s Neo-Nazi BTC Tracker. [Twitter] You should read Brenna Smith’s work tracing neo-Nazi crypto usage at Bellingcat. [Bellingcat] We cover Christopher “The Crying Nazi” Cantwell, telling his fans to just HODL. We mention Cody Wilson, and Joel Greenberg and Congressman Matt Gaetz. And there are so many coincidences!

I said in the podcast that there were no neo-Nazi NFTs. Unfortunately, Jorge Stolfi has reminded me of the Rare Pepes, which were derived from the use of the Pepe meme on 4chan /pol/, so they might count.

We kept chatting for a while after we finished the podcast, so Jack included the “three guys ramble on mic” as a bonus 20 minutes on the end. There’s some followup on LessWrong nanotechnology and quantum mechanics — Daniel has a degree in chemistry, so he was fully equipped to appreciate these. I also go into my Keynesian rant. I use rather more salty language in this bit than I usually do on podcasts.

I used my new tie-pin microphone, a Gyvazla clip-on (UK, US) recommended to me by Jason Knight, who I did a podcast with previously. It’s very good for doing television, ‘cos telly doesn’t like headsets at all. My voice on this IDSG was a bit quiet — you can hear where I turn up the volume in PulseAudio — and a bit bassy (‘cos it was close to my face), and the top end almost disappeared above 3kHz, so I’ll need to compensate for that in future. But I’d still recommend this microphone in general, as a very usable cheap tie-pin.

I previously did an IDSG about Scott Alexander, author of the Intellectual Dark Web rationalist blog Slate Star Codex. Scott Alexander is a massive and explicit fan of eugenics, “human biodiversity” (scientific racism), sterilising those he sees as unfit, and the neoreactionary movement, so that was close enough for our purposes. (For cites on all those claims, listen to the podcast.) It was a fun episode. [I Don’t Speak German] 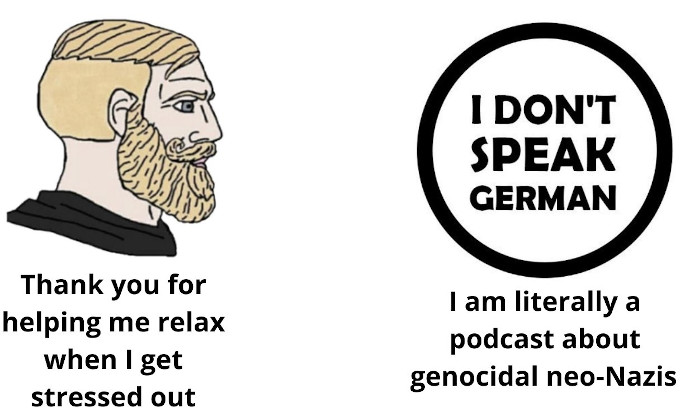