I keep being taken for some sort of raving SJW commie when I talk liberalism 101. So let’s liberal liberally for a bit.

Many crypto people will disagree, because they’re into deeply wrong crank economics. But let’s proceed.

“PlayDumb” asked in the FT Alphaville Unofficial Telegram group: “What is the ONE trend that stands out for you over the last 10yrs in finance and markets, in general?”

The one trend that stands out for me in finance and markets over the past decade is: increasing desperation to achieve returns.

Interest rates are in the toilet — so investors are susceptible to questionable, and increasingly desperate, schemes.

We get a proliferation of nonsense in attempts to magick up returns — Softbank pouring ridiculous amounts of money into companies with no path to profit, SPACs (which are literally “A company for carrying on an undertaking of great advantage, but nobody to know what it is“), and so forth.

(The crypto market’s frantic posturing to claim that crypto funds are totally real and valid financial institutions is a pitch to the desperate investor market, in the hope that crypto nonsense can be sold to the desperate as sufficiently resembling regular finance nonsense. This is one of the pitches for DeFi, for example.)

Arguably, this is the past twenty years. The 2008 financial crisis came from the same desperation, as financial engineers tried to achieve returns by constructing ever-more-elaborate Jenga stacks of collateralised debt obligations — which collapsed as soon as the number showed the slightest sign of going down.

Or, indeed, the past forty years — the problem with neoliberalism is that you eventually run out of other people’s public institutions to asset-strip.

The non-rentier economy — the one where people live, that does things — is in the toilet because of rentierism. That Adam Smith fellow had quite a few pointed words on the subject of landlords’ parasitical effects on an economy in The Wealth of Nations, and the rise of rentiers is Thomas Piketty’s basic thesis in Capital in the Twenty-First Century (UK, US).

Politicians in the UK and US subsist on political donations from rentiers. This has given them a forty-year ideological bias against just supporting the non-rentier economy, and against remembering why rentierism is bad for an economy.

The US response to the COVID-19 pandemic is a perfect example. They could have supported the non-rentier economy with regular stimulus cheques and so on. But instead, they put unlimited Federal Reserve money into the stock market — that is, a thing that exists only as a derivative of the real economy. The people were still screwed, but the government could brag how number is up.

If you feed your rentiers, because they make bigger political donations, they parasitise your non-rentiers.  The trouble there is that the non-rentiers are where the money comes from for the interest rates the investor class desperately need.

Now, that’s literally just basic liberal economics. Because Keynes — who was a successful capitalist investor — was just completely right. Neoliberalism is based in ideological objection to Keynes, and never mind that it doesn’t work. Be more Keynes — Hayek was wrong.

Guillotine GIFs at the polite end, and people setting fire to stuff at the impolite end, are unfortunate but trivially predictable consequence of several decades’ blatant abuses. So I would suggest doing things that lead to much less of those. This will directly lead to investment returns going up. 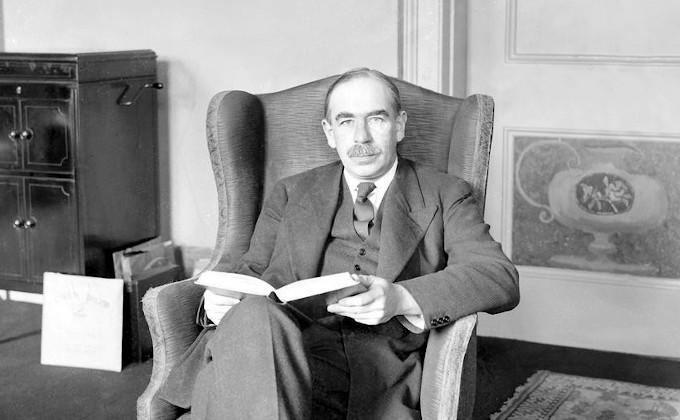 3 Comments on “Desperate investors, neoliberalism and Keynes: how to increase returns”