BitFi is a new hardware wallet. It’s basically an Android-based device for holding cryptos. (And it tracks the heck out of the user.) Unfortunately, BitFi’s chairman is John McAfee, who is not so good at keeping his social media interactions on an even keel. McAfee released a video in which he insisted the BitFi was “unhackable” — but researchers have rooted the device and uploaded patched firmware. For instance, here’s a BitFi that’s been hacked to play McAfee’s video.

Dubai launches the Court of the Blockchain, for resolving disputes in the fast-moving world of Digital Ledger Technology! This is presently just a forward-looking plan, just like literally every other governmental “blockchain” scheme in Dubai to date.

Tiny new crypto exchange BitForex has been faking its volume reports to CoinMarketCap so blatantly that even bitcoiners have noticed — $4.3 billion in Tether trades, on a tiny exchange with trades on the order books of a few tens of thousands of dollars. And a bot-filled Telegram channel. But you can rest assured that every other exchange reports good numbers, and doesn’t try to manipulate prices with wash trades, and …

Minds + Machines (MMX) is a domain name registrar. They own the top-level domain .luxe — which was created in 2014 for luxury goods websites, but they’re now marketing it as being ideal for Ethereum wallets. Apparently it now stands for “Lets U Xchange Easily.” They’ve also done a deal with the Ethereum Name Service. The main benefit that domain name people can see is that it’ll be easier to register a .luxe name than it is to register a .eth name, and that .luxe is an official ICANN-listed top-level domain and .eth isn’t.

The SEC’s Office of the Whistleblower hotline now has a category for “Initial coin offerings and cryptocurrencies.” Via Preston Byrne — “The fact that there is an option to report cryptocurrency manipulation now on the SEC’s Form TCR suggests (a) many such whistleblower reports have been received and (b) maybe @Bitfinexed and Bloomberg/@mattleising weren’t blowing hot air.” 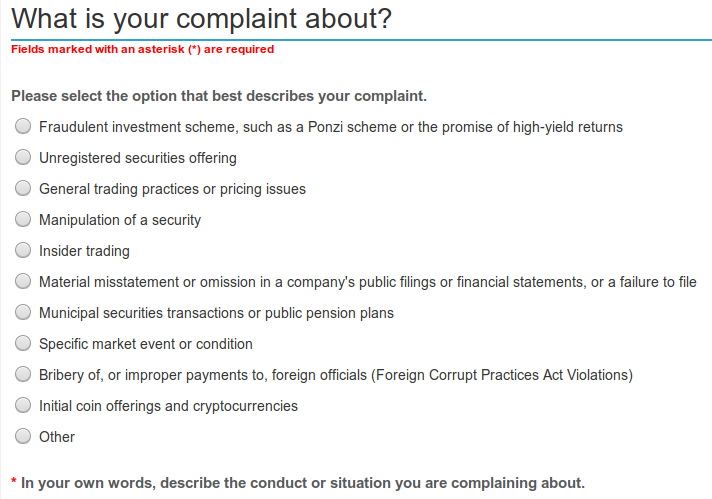 Vili Lehdonvirta: “I’ve co-authored a peer-reviewed paper on why the Bitcoin/blockchain hype persist despite being unmoored from reality.” Mine the gap: Bitcoin and the maintenance of trustlessness. There’s also a non-paywalled version.

Cryptocurrency mining is so environmentally destructive that it could damage a country’s compliance with the Paris climate accords all by itself. Here’s the paper, by Jon Truby at Qatar University College of Law.

Goldman Sachs is pretty sure Bitcoin’s price is going to keep tending down — because there’s still nothing holding the price up except irrational exuberance, and the exuberance is burnt out. Given that a commodity with almost no trading is trivially manipulable, as we see right now, Bitcoin could go back up again! But it strikes me as quite likely it could stay down for this year and much of next year. Of course, Goldman Sachs and I could be assuming the market is in any way rational.

Bitfinexed has a new post up: The Tether Truth Machine — detailing how Tether and its bank were set up by the same team, led by Brock Pierce, that attempted to buy out the Mt. Gox exchange a few years ago.

Yahoo! Finance has an interview with Louis Freeh, the lawyer who did the latest non-audit of Tether.

KryptoGraphe’s “What Are the Best Books for Blockchain and Cryptocurrency Beginners?” recommends Attack of the 50 Foot Blockchain to new altcoin investors.

Not crypto-related — but over on my personal blog, I’ve posted about how we’re dealing with day-to-day GDPR issues at the day job. At this point, it’s just regulatory compliance.

This is the only kind of blockchain I want to see. Stone blocks, iron chains. pic.twitter.com/hXV5W98UAY