Conservative MP Grant Shapps is in the papers this week over his advisory role in the OpenBrix ICO: Grant Shapps resigns from blockchain positions after FTAV discovers secret pay deal.

Shapps was set to receive BRIX tokens to a notional value of £170,000 to £700,000 — or rather, a quantity of tokens that would have been sold at that price in the ICO — but declared his advisory role in the Register of Members’ Financial Interests as at 16 July 2018 (archive) as “unpaid,” because their present sale value is zero. He said that he had described the situation to the registrar of members’ interests, and been advised to list it as “unpaid.”

Jemima Kelly from FT Alphaville then asked Shapps how getting a large pile of tokens for his work could be described as being “unpaid” — and suddenly everything was on fire, just from the question being asked.

Shapps quit his advisory role on Tuesday 31 June, after FT Alphaville spoke to him for the story, and asked that particular pointy question. He said he wouldn’t be accepting the tokens after all, and also quit his position as co-chairman of the All-Party Parliamentary Group on Blockchain. Shahad Choudhury, founder of OpenBrix, was told by the ICO’s lawyer not to speak to the FT again.

Shapps’ “advisor” role seems to have been primarily celebrity endorsement, in the manner I’ve outlined previously — put your name and face on the white paper, get some tokens from the ICO.

Choudhury told FT Alphaville that Shapps “had nothing to do until after the thing … His main role was the governance role after we’ve got the money. He could have quite happily not done anything and he’d still be governance chair.”

Shapps’ jobs were to write a blog post on the potential of blockchain in real estate, and to attend an OpenBrix event, which has apparently already happened — so not the one that was going to be held at Parliament House, as advertised in this tweet, which was pinned to the top of the @openbrix Twitter, but has now been deleted: 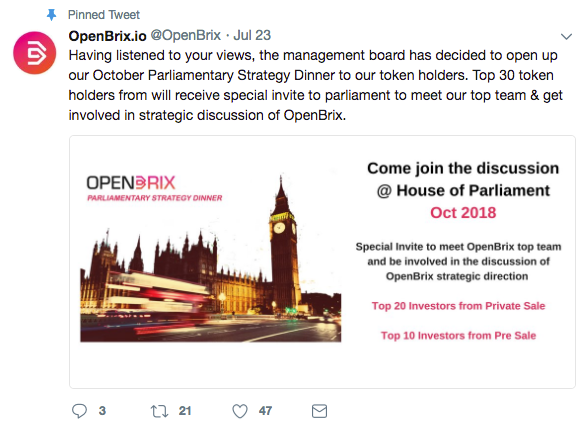 The story hit the front of the Financial Times website on the morning of Wednesday 1 August, and was, I’m told, quite popular.

Labour MP Jo Platt then wrote to the Parliamentary Commissioner for Standards, asking that Shapps be investigated.

As MP's our one and only priority should be to our constituents, not to outside organisations for profit.

That is why I have today called for Grant Shapps to be investigated for his work with 'OpenBrix' which he has failed to properly declare. pic.twitter.com/n9B1S1mikq

Shapps welcomed the call for an investigation, wishing to clear his reputation.

Shahad Choudhury from OpenBrix is also a full-time civil servant, working at UK Export Finance, otherwise known as the Export Credits Guarantee Department. Registers of civil servants’ outside interests are not public — but Choudhury resigned as a director of OpenBrix Ltd. on Thursday 2 August. He’s listed in the 8 July 2018 version of the ICO white paper as “CEO & Founder,” but in the 1 August version as “Tech Strategist + Co founder.” He was replaced as CEO by Amy Orivel, who advises quite a lot of ICOs.

But what about OpenBrix itself?

Blog reader bibesco pinged me about OpenBrix last week, wondering if Shapps had properly declared his interest in this ICO. I presumed so, but didn’t go and check the register, so didn’t see that he’d entered his position as being “unpaid” … there’s a lesson about always checking!

Jemima Kelly from FT contacted me a few days later, as she’d interviewed Shahad Choudhury and Phil Millo from OpenBrix over lunch, and wondered what I thought of their pitch. I sent her a quick run through of the white paper — though that wasn’t used in the article, because the part about Shapps and the register of members’ interests blew up, and 2000 words later it was on the front page of the FT site.

But let’s not leave my work to waste! Here’s:

The white paper goes into considerable detail about regulatory compliance, KYC, and how for US investors this is a 506(c) offering and all buyers must be accredited. They are very big on KYC, and seem to consider it a feature.

That said, they’re doing some good old 2017-style cowboy ICO promotion — the BitcoinTalk thread (archive) lists how 4% of the tokens will be given to their crypto street team for promotion in various social media. This post is a pretty good example of how ICO promotion works, and why ICO promoters are annoying in the ways they are.

The ICO template is:

The problem here is: the real estate website market in most countries is a monopoly or a duopoly — e.g., Zoopla and RightMove in the UK. Sign up with OpenBrix, and get your listings cheaper, with better data!

Shahad Choudhury says he’s been involved in real estate since he was fifteen, so he knows something about the market — which puts him well ahead of your average ICO promoter in domain knowledge.

The white paper uses the words “decentralise” or “decentralised” nineteen times — but they’re planning an entirely private organisation, with a membership fee. There is nothing decentralised about this, except the data being publicly available. There’s no function that wouldn’t be done much more sensibly in a conventional centralised manner.

Except the bit where they get to make and sell the BRIX token. They say they have an exchange deal lined up with FYDO Exchange.

They don’t appear to understand just how slow and limited all existing public blockchains are, e.g.:

This bit from the white paper is concerning:

The connection to the customers do not belong to any single part of the network and no one group has the ability to shut it down. For that reason, a Decentralised Autonomous Organisation (DAO) is required. OpenBrix will be that DAO.

A completely human-proof DAO is a worked example of why smart contracts are a terrible idea. I spent all of chapter 10 of Attack of the 50 Foot Blockchain detailing why pure smart contracts are a terrible idea, and The DAO provided us the blow-by-blow worked example of the things that are almost certain to go wrong when you set yourself up this way.

The rest of the details are entirely aspirational at this stage — none of this has been built or exists as yet — but are the usual set of blockchain and smart contract promises, with the added frisson of knowing they think a completely autonomous DAO is a good idea.

The OpenBrix team appear to be sincere and well-meaning, and have actual domain knowledge — but they have a frightening degree of faith in business blockchain dreams that don’t exist and can’t exist.

ICOs and politics — the future

I do concur that how to correctly report payment for an ICO advisor role needs clarification.

ICOs probably aren’t going away — and if MPs are going to have second jobs, then some of those jobs will be ICO advisor roles. They’ll receive tokens that are worthless at the time, but might be worth a lot later.

There needs to be a way to account for these things in an orderly and transparent manner. Perhaps that’s a question for the Blockchain APPG to advise on.