The Know Your Customer anti-money laundering (KYC/AML) regulations are an endless source of woe for the Bitcoin trader.

“Know Your Customer” as we know it came in as part of the USA PATRIOT Act after 9/11. The idea was to catch money laundering by terrorists and criminals.

The tricky part for you, the customer, is that it requires your bank to treat you as the threat. And Bitcoin is notoriously a favourite of criminals and drug dealers, so it gets special attention from bank compliance officers.

This applies to Bitcoin exchanges as well as banks. Coinbase is well known for requiring people to re-upload identification they’ve already provided, putting accounts into “restricted” mode (where you can’t get out what is in fact your money) and demanding more identification to withdraw than they required for you to deposit. All of this is also automated, with effectively no customer service. But they aren’t just holding on to your money for the sake of it — they are legally required to treat you as a threat.

Even when your exchange feels clear to send the money to your bank, the bank may have strong concerns about touching Bitcoin in any manner — for instance, this letter to one Coinbase user:

We are happy to have you as a Lakestone Bank & Trust customer and would like to fulfill your banking needs, but it has come to my attention that you are making purchases and receiving funds from Coinbase.com — a type of business transaction that is against Lakestone’s policies and will need to be discontinued immediately.

We will continue to monitor your account and if we see that these types of transaction continue we will be forced to take other action, up to and including closing the account. 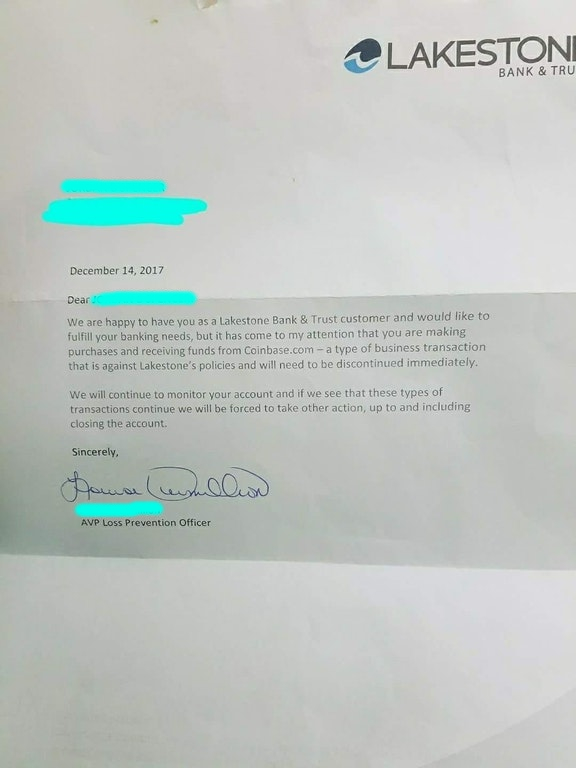 (The user’s fellow crypto users reacted as one would expect — i.e., they descended upon the bank’s Facebook and Yelp pages like rabid cultists.)

The problem is that Bitcoin was intended from the outset to be resistant to government control. The creators were idealistic anarcho-capitalists who envisaged this being used for free individual citizens to conduct commerce between themselves without the spectre of government theft — i.e., taxation.

What it obviously attracted were criminals — who are endlessly creative in finding ways to convert bad money into good-enough money — and drug dealers and others who have trouble using proper money, so need to use a substitute currency.

That is: Bitcoin was literally designed for tax evasion and money laundering. It isn’t technically anonymous — if you care enough, you can do the tedious legwork to trace the flows of bitcoins on the blockchain — but your bank isn’t going to be keen to accept that burden just so you can cash out some bitcoins.

The other problem is that Bitcoin users tend to be serial entrepreneurs — which can mean having founded multiple successful businesses, but more often means chronically unemployed, bad with money and predisposed to fraud. Even if they give the bank the history of every Bitcoin involved, they’re already risky customers.

(And then there are the bitcoiners who think they’re obviously smarter than bank compliance officers — e.g., bitcoiners who tell their bank that Coinbase is a coin collector’s site. Please trust me that this trick never works.)

How this affects cashing out

Coinbase claims that cashing out is a simple button-click. This is true for some, but false for too many. Cashing out can be slow and painful.

The reporting requirements on banks are stringent. Banks are required to report on large deposits, and will sometimes refuse any wire transfer they think looks dubious.

This particularly affects those who discovered an old Bitcoin stash and want to turn it into cash. I know of one such case where the user had sold a car for bitcoins years ago, and wanted to cash in on the current bubble. The best the exchange could come up with was sending it in daily in amounts of several thousand dollars — and dribbling a million-dollar balance out a few thousand dollars at a time is not only tedious, it looks like structuring, when someone’s trying to dodge reporting requirements.

US bank users are most affected by these requirements. As I understand it, things are better for UK and Australian residents — though your bank may still fire you as a customer. One UK report from July this year shows HSBC assuming transactions from a direct person-to-person sale on LocalBitcoins were fraudulent, with the recipient’s account being locked for several days until everything was sorted out.

Contact your bank first. Be prepared to provide the full history of every crypto you’ve ever touched and where the money for it came from. Be prepared to give enough information to your tax office that they could reconstruct you from a nail clipping. If it’s any substantial sum, get a proper accountant.

Reports from Coinbase users suggest that if you successfully get your money out and into your bank once, you should have less trouble on future transactions. Not no trouble — but less trouble. The screenshot to the right was taken by a UK user on 22 December 2017, assuring them they’d have their money by the 15th …

KYC/AML affects the exchanges too

Exchanges take these issues very seriously, because KYC/AML issues can get an exchange cut off from any banking. And this has happened.

Bitfinex — still the largest Bitcoin exchange by volume — and its associated company Tether lost access to their US dollar banking in April 2017, when Wells Fargo, the only correspondent (intermediary) bank between their Taiwan banks and their US customers, refused to process wire transactions to or from Bitfinex. Bitfinex sued — which is a good way to make sure no other bank wants to have anything to do with you — but to no avail. As Phil Potter of Bitfinex put it:

We’ve had banking hiccups in the past, we’ve just always been able to route around it or deal with it, open up new accounts, or what have you … shift to a new corporate entity, lots of cat and mouse tricks.

As I detail in chapter 8 of the book, I’m pretty sure this is how the 2017 crypto bubble was kicked off — when people couldn’t get US dollars off Bitfinex, so they bought Bitcoin and other cryptos to withdraw, pushing the price up.

Next time: Bitcoin is not a Ponzi scheme! Technically.

Note: comments will be screened. It’s nice if you had no trouble yourself, but “I’m all right Jack” is not the attitude for this series of posts. Also, conspiracy theories about bankers aren’t novel or interesting.

2 Comments on “Why you can’t cash out pt 2: Bitcoin and Know Your Customer/Anti-Money Laundering laws (KYC/AML)”