Well, I didn’t get part 2 of my summer reading suggestions done before summer ended. But what better to warm your heart through the autumn evenings than tales of fraud, fraud, fraud!

Dan Davies’ Lying for Money is another of those books I recommend to everyone, all the time. Only Chapter 2, on darknet markets, is directly about crypto — but the rest of the book’s totally about crypto. Also, you need both editions. 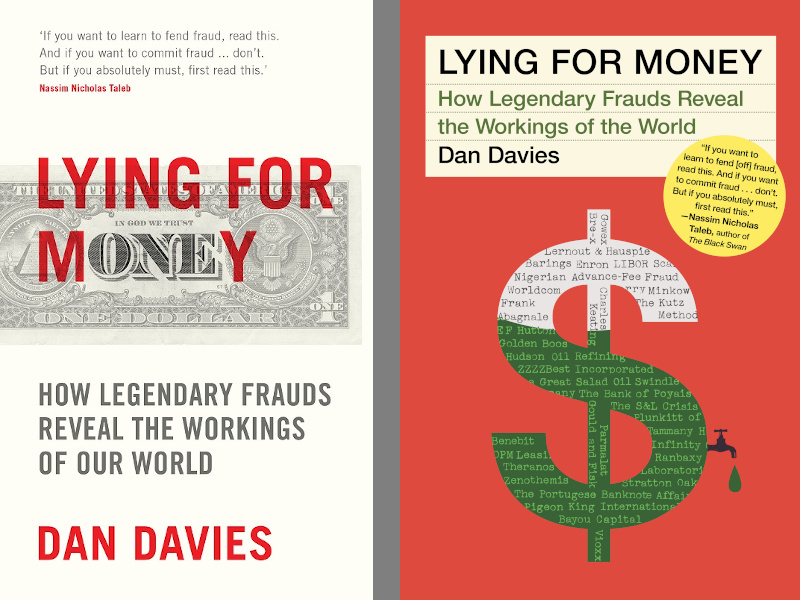 Davies outlines a taxonomy of frauds:

Fraud works by slipping between the cracks of normal inspection. When you first find something amiss, it will likely appear to just be an error. It can be very hard to tell deliberate fraud from mere incompetence or bad luck — which is why prosecuting fraud is so hard.

But frauds tend to grow and spiral outward, as the fraudster tries to cover the hole in the books with more fraud.

Fraudsters also tend to be serial fraudsters — “it is really quite rare to find a major commercial fraud which was the fraudster’s first attempt.”

Most fraudsters in crypto have left a trail of destruction behind them, if you go looking — like how the Quadriga CX crypto exchange collapsed with $200 million missing after owner Gerry Cotten’s apparent death, and Cotten turned out to have been running Ponzi schemes since he was fifteen.

Davies has a Golden Rule for detecting fraud:

(Dan doesn’t look forward to the day he has to write up Tether; enough people ask him about it.)

Market frauds — such as the LIBOR scandal, or Tether, or most of crypto — ultimately steal from retail. “Retail investors have one hugely attractive property when considered by a professional — they’re dumb money.”

Crypto is suffused with fraud because it operates almost entirely outside any effective regulation. This attracts sincere libertarians who are morally offended by government regulation and are sure that a free market can work it out for itself — despite the evidence of all history — but it’s also catnip for fraudsters, keen to prey on rubes foolish enough to believe such fairy tales:

If a fraud is operating outside the regulated sphere, it can only be dealt with by the authorities as a fraud (rather than merely as a lousy or Mittyish investment scheme), and unless the scheme is blatant, it is usually difficult to assemble this kind of proof until after it has collapsed.

Regulation tends to come in only when an entire market is seen as having gone bad:

The normal state of the political economy of fraud is one of constant pressure toward laxity and deregulation, and this tends only to be reversed when things have got so bad that the whole system is under imminent threat of losing its legitimacy.

The UK edition came out in 2018. The US edition, published 2021, has the same structure, but makes its points with stories from the US instead, because nobody in America knows who the Kray twins were — which is a pity, ‘cos the tales from their accountant, Leslie Payne, are marvellous:

Payne wasn’t the Krays’ accountant in the sense of keeping books for their crime syndicate — Reggie did that himself, writing ‘Protection from club in Walthamstow — £30’ and ‘Bribe to Dalston Police — £40’ in expensive ledgers that he had purchased despite Leslie begging him not to.

Davies likes the US edition better — he thinks he makes his points more clearly — but really, I’d like to see an omnibus edition with all the stories from both.

In the meantime, you just need to buy both editions. If you’re in the UK or US, getting the other edition will be fraught; I ended up getting the US edition from a popular book piracy cultural preservation site. Find a gambling charity to send some money to. And tell everyone else about the book.

3 Comments on “Dan Davies: Lying for Money — not a book about crypto, except it really is”