Yesterday, the following diagram was leaked by El Tapudo — which is mostly a satirical publication, but generally in the sense of poking fun at real events, not just making stuff up: [Twitter]

Shortly after, I was forwarded a copy of approximately the same diagram in English, which appears to be the original. From the provenance of the diagram, this seems to be a genuine leak.

I’ve put a redrawn version below, so as to reduce how traceable the leak is: 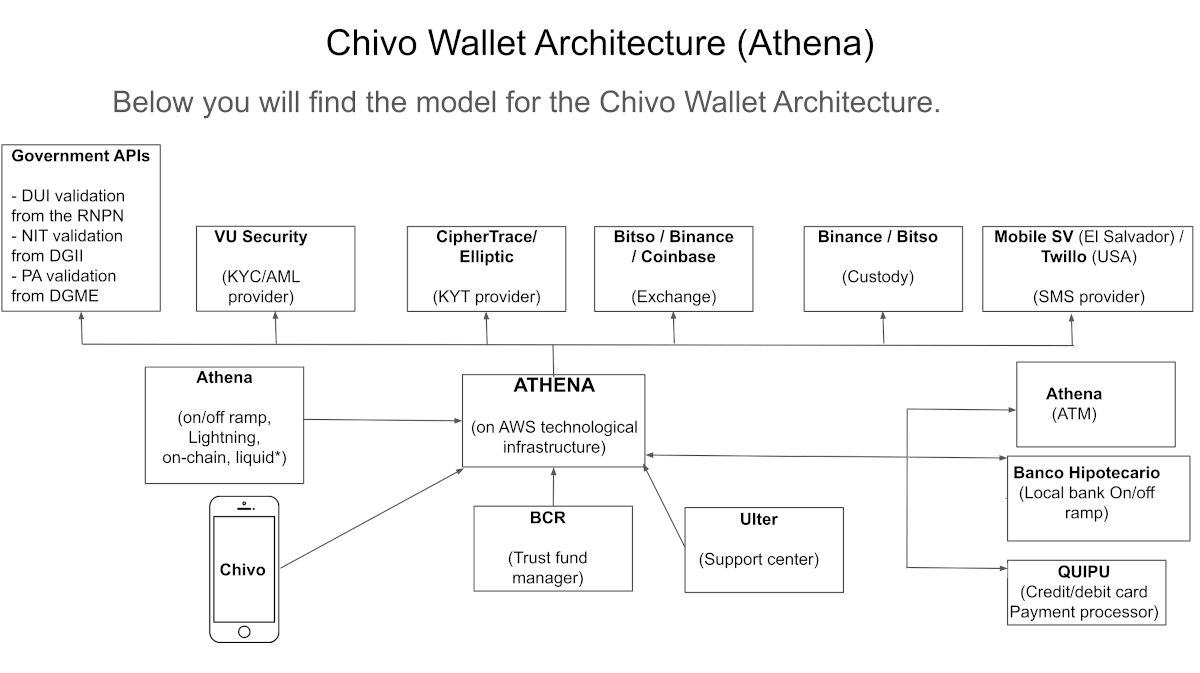 The Chivo back end

Athena Bitcoin is a Bitcoin ATM company. [Athena] Athena will run the back-end, interfacing Chivo to banks and the cryptocurrency system.

Back-end Bitcoin exchanges include … Binance. They’re also using Binance as the custodian. Yes, the exchange that has regulators worldwide howling for its blood.

There’s no way on earth that Binance would be up to the standards required of cryptocurrency custodians in the regulation for banks and Bitcoin — but I suppose the rules are different for the officially blessed service.

Athena also has the Bitcoin ATM contract — 200 ATMs. They did the ATMs for Bitcoin Beach too. Total Athena Bitcoin ATMs worldwide was previously on the order of 100 or so. [Bloomberg]

How do all these companies get paid?

President Bukele is quite clear: there will be no commissions on transactions:

Quipu GmbH is a real-world company — they do integration and IT for banks and credit unions in Germany, and also have a presence in Latin America. They’re the card processor for Banco Hipotecario.

Ciphertrace and/or Elliptic are doing “Know Your Transaction” for anti-money-laundering. (A function like this is required in the regulations for banks handling Bitcoin.)

None of Quipu, Ciphertrace, Elliptic, Twillo, AWS, Coinbase, Binance or Bitso do what they do for free.

The money to pay the private companies has to come from somewhere. So it’ll be exchange rate spreads between buying and selling prices. Or maybe interest on the float, the way shadow banks make their money.

It is possible that the leaked diagram is just a preliminary sketch, and that the named companies have yet to be contracted to do these jobs — so it might not be Binance in particular, and so on.

(For any other national payment system two weeks from launch, you could be reasonably sure that the companies named in a slide were actually the companies that would be involved — but the Bitcoin Law project has been incompetent slapdash nonsense from the start, so we can’t be certain.)

It’s not clear how Strike fits into Chivo at this stage — or if it does at all. As I noted previously, Strike has been marketing Bitcoin terminals to merchants quite hard, though those will presumably run on Strike’s own network.

The Bitcoin Trust at BANDESAL

In other news, the President has only just put the law required to create the $150 million Bitcoin trust at BANDESAL — the buffer between bitcoins and dollars for merchants — to Congress. [Derecho y Negocios, in Spanish]

This is being called a trust fund — but it works more like a currency board, which countries use to maintain a local currency pegged against a foreign currency. The trust fund can increase its size by itself, and manage where the money is invested. It can also issue debt as bonds! [Asamblea Legislativa, PDF, in Spanish]

You can see why BCR, the reserve bank, wanted this thing over there on BANDESAL’s balance sheet, not their own — even as the diagram lists BCR as administering it.