So firstly, I called it two years ago:

I'd expect the bubbly headlines to start again 2021-2022, it feels to me like that's about how long it will take to grow a fresh crop of Greater Fools.

In general – there's always going to be people who are desperate to buy into this year's version of ostrich farming.

Not that this was any feat of prognostication. Bitcoin is a speculative commodity without a use case — there is nothing it can do, other than bubble, or fail to be bubbling. It was always destined to stagger along, and then jump at some point, almost certainly for stupid reasons.

Remember that the overarching goal of the entire crypto industry is to get those rare actual-dollars flowing in again. That’s what this is about.

We saw about 300 million Tethers being lined up on Binance and Huobi in the week previously. These were then deployed en masse. 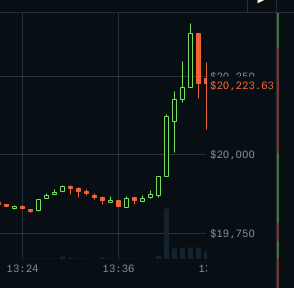 Coinbase BTC/USD chart at the moment of the peak. Dull, isn’t it?

Can you cash out?

The Coinbase chart showed quite a lot of profit-taking, as bagholders could finally dump. When you see a pump immediately followed by a drop, that’s what’s happening.

Approximately zero of the people saying “BEST INVESTMENT OF THE LAST DECADE” got in a decade ago — they bought at a peak, and are deliriously happy that they can finally cash out.

Seriously: if you have Bitcoin bags, this is the time to at least make up your cost basis — sell enough BTC to make up the ActualMoney you put in. Then the rest is free money.

Binance and Coinbase showed the quality we’ve come to expect of cryptocurrency exchanges — where you can make them fall over by using them. But I’m sure Coinbase will get right onto letting you have your actual dollars. [CoinTelegraph] 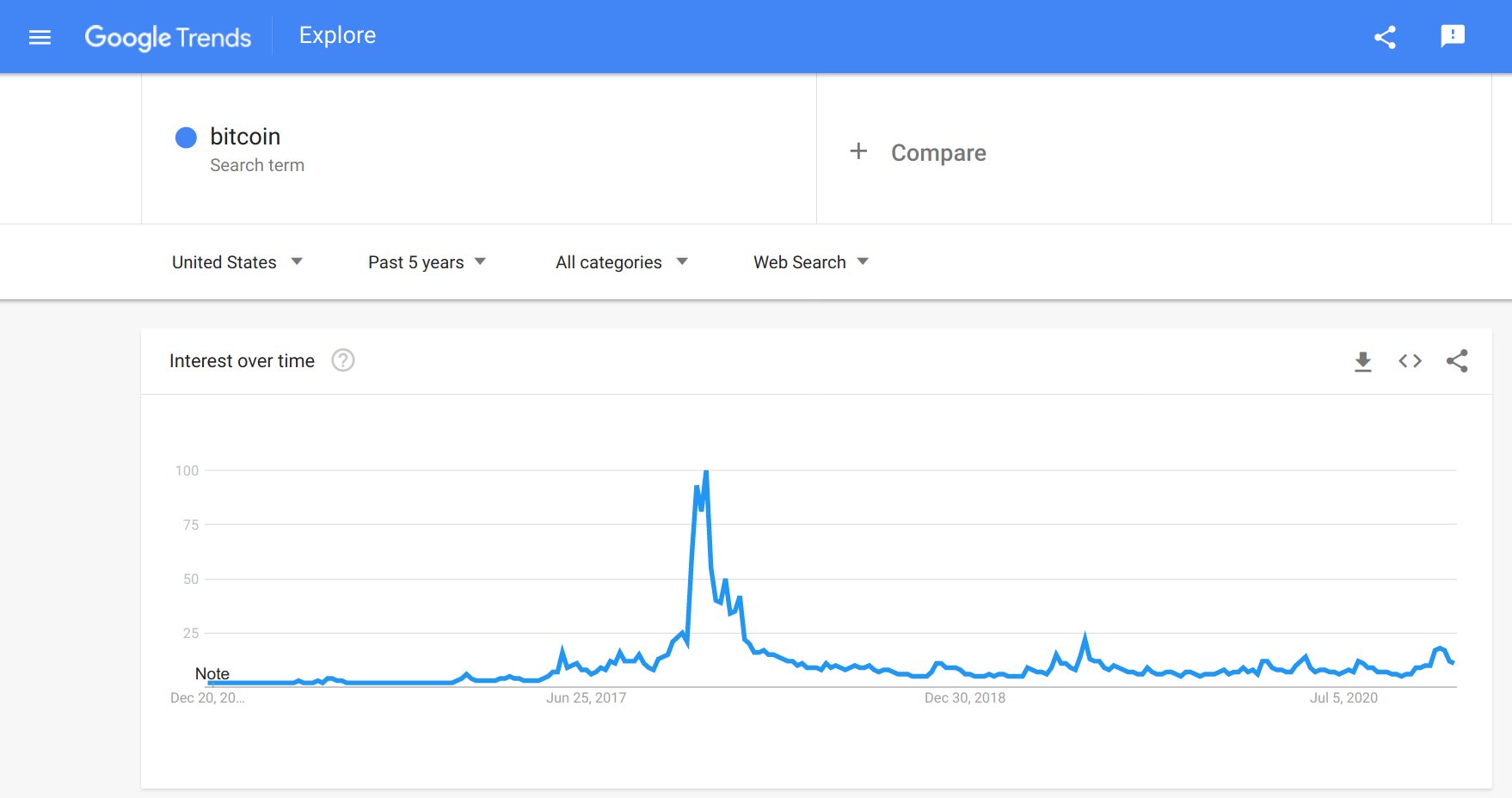 So does everyone love Bitcoin now?

Not on the evidence. The Google chart is still dead — see above. That peak in 2017 is what genuine organic retail interest looks like. This isn’t that, at all.

Retail still isn’t diving into Bitcoin — even with Michael Saylor at MicroStrategy and Jack Dorsey at Square spending corporate funds on marketing Bitcoin as an investment for actual institutions, and getting holders at hedge funds to do the same. But the marketing will continue.

Remember that there’s a lot of stories happening in crypto right now. BitMEX is still up, but Arthur Hayes is a fugitive. The Department of Justice accuses BitMEX — and specifically Hayes — of trading directly against their own customers.

iFinex (Bitfinex/Tether) are woefully short of the documents that the New York Attorney General subpoenaed and that they’ve been fighting against producing for two years now, and that they must produce by 15 January 2021. Remember: if iFinex had the documents, they’d have submitted them by now.

So there’s a pile of people in trouble — who have coins they need to dump.

(And John McAfee did promise “I will eat my dick on national television” if BTC didn’t hit $500,000 within three years of 2017. So maybe this is a last ditch McAfee penis pump.) [The Dickening]

A pumped Bitcoin peak is just one story among many going on right now — and a completely expected one.

UPDATE: Here’s the smoking gun that this was a  coordinated pump fueled by stablecoins — 127 different addresses trying to deposit stablecoins to exchanges in one block of transactions on Ethereum, just a few minutes before the first price peak. [Twitter]

Price is all about consensus. I guess the sentiment turned around to buy $BTC at that time.

This indicator is helpful to see buying power.

Start the new year by finding a way to create a little joy, no matter how small or fleeting pic.twitter.com/fiiCB4BW3c