Tether is a US dollar substitute token, issued by Tether Inc., an associate of cryptocurrency exchange Bitfinex. Tether is a favourite of the crypto trading markets — it moves at the speed of crypto, without all that tedious regulation and monitoring that actual dollars attract. Also, exchanges that are too dodgy to get dollar banking can use tethers instead.

Bryce Weiner has written a good overview of how Tether works in relation to the cryptocurrency industry. His piece says nothing that any regular reader of this blog won’t already know, but he says it quite well. [Medium]

Weiner’s thesis: the whole crypto industry depends on Tether staying up. Tether is Too Big To Fail.

The purpose of the crypto industry, and all its little service sub-industries, is to generate a narrative that will maintain and enhance the flow of actual dollars from suckers, and keep the party going.

Increasing quantities of tethers are required to make this happen. We just topped twenty billion alleged dollars’ worth of tethers, sixteen billion of those just since March 2020. If you think this is sustainable, you’re a fool.

Does crypto really need Tether? Ask the trading market — stablecoins are overwhelmingly tethers by volume. I suspect the other stablecoins are just a bit too regulated for the gamblers. Tether is functionally unregulated.

In fact, the whole crypto market is overwhelmingly tethers by volume — Tether has more trading volume than the next three coins, Bitcoin, Ethereum and XRP, combined. [Decrypt]

In March, when the price of Bitcoin crashed, a pile of exchanges and whales (large holders) put money, or maybe bitcoins, into Tether to keep the system afloat. At least some percentage of the backing for tethers might exist! (All are now complicit in a manner that would be discoverable in court.)

This is why crypto is so up in arms about the proposed STABLE Act, which would require stablecoin issuers to become banks — the Act would take out Tether immediately, given Tether’s extensive and judicially-recognised connections to New York State, and there is no way on earth that a company that comports itself in the manner of Tether is getting a banking charter.

(The Tether printer was quiet for about a week after the STABLE Act came out — and the price of Bitcoin slid down about $3,000.)

The Bitcoin price is visibly pumped by releases of tethers — particularly on weekends. I find it strangely difficult to believe real-money institutional investors are so keen to get on the phone to Tether on a Saturday.

A snapshot of Coinbase BTC/USD this weekend. Spot when tethers were deployed on Binance or Huobi.

Clap if you believe in Tether

But it’s far wider than the traders. Every person making money from crypto — not just Bitcoin, but everything else touching crypto — is painfully aware they need Tether to keep the market pumped.

All the little service sub-industries are vested in making crypto look real — and not just handwaving nonsense held up by a hilariously obvious fraud. So Tether must be propped up, at all cost — in the face of behaviour that, at any real financial institution, would have had the air-raid sirens going off long ago.

The big question is: what are all those tethers backed by? Tether used to confidently claim that every tether was backed by a dollar held in a bank account. This turned out not to be the case — so now tethers are backed by dollars, or perhaps bitcoins, or loans, or maybe hot air.

Various unfortunately gullible journalists have embarrassed themselves by taking what Tether tells them at face value. Matthew Leising from Bloomberg confidently declared in December 2018, based on documents supplied to him by Tether, that Tether seemed fully backed and solvent! [Bloomberg]

Then four months later, the New York Attorney General revealed that Tether had admitted to them that tethers were no more than 74% backed, and the backing had failed in October 2018  — Tether had snowed Leising. I don’t recall Leising ever speaking of this again, even to walk back his claim.

Larry Cermak from The Block fell for the same trick recently, from Tether and from people working closely with Tether. [Twitter]

Bitfinex/Tether was supposed to give the NYAG a pile of documents by now. The NYAG is talking to the companies about document production, and just what documents they do and don’t have — so proceedings have been delayed until 15 January 2021. [letter, PDF]

Dan Davies’ book Lying For Money (UK, US) talks about the life cycle of frauds. A fraud may start small — but it has to keep growing, to cover up the earlier fraud. So a fraud will grow until it can’t.

I did a chat with the FT Alphaville Unofficial Telegram a few weeks ago. Someone asked a great question: “Who’s going to make out like a bandit when/if Bitcoin collapses?” Most scam collapses involve someone taking all the money.

In the case of Bitcoin and Tether, I think the answer is … nobody. A whole lot of imaginary value just vanishes, like morning dew.

I mean, I’m sure someone will do well. But there’s no locked-up pile of money to plunder. Crypto “market cap” is a marketing fiction — there’s very little realisable money there. What was the “market cap” of beanie babies in 2000? Imaginary, that’s what.

So how does this end? The main ways out I see are NYAG or the CFTC finally getting around to doing something. Either of those are a long way off — because regulators move at the speed of regulators. Even the NYAG proceeding is just an investigation at this stage, not a case as such.

Everyone in crypto’s service industries has a job that’s backed by the whales. Perhaps the whales will keep funding stuff? I’m not counting on it, given all the redundancies and shut-down projects over 2018 and 2019.

This will keep going until it can’t. Remember that it took seventeen years to take down Bernie Madoff. He got institutional buyers in, too. 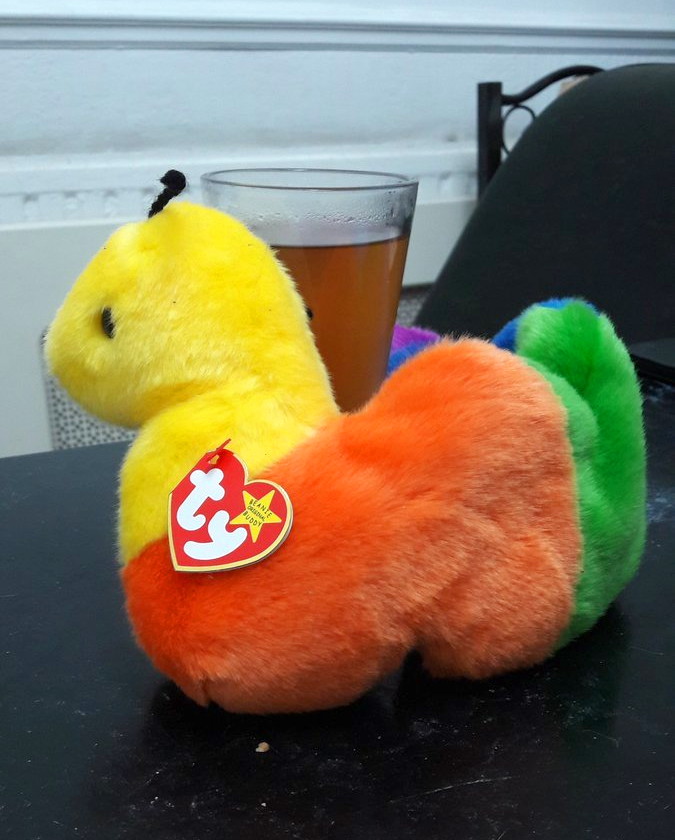 Past asset bubble veteran Inch the Inchworm, his Ty slightly askew, hitting the sauce after seeing his crypto portfolio