Crypto exchange hacks are incredibly rare, and only happen every month or so. Today’s winner is Binance, who lost 7000 BTC (about $40 million) in one transaction some time on Tuesday. They posted about it at 23:34 UTC on 7 May:

We have discovered a large scale security breach today, May 7, 2019 at 17:15:24 (UTC). Hackers were able to obtain a large number of user API keys, 2FA codes, and potentially other info. The hackers used a variety of techniques, including phishing, viruses and other attacks. We are still concluding all possible methods used.

This is the hack transaction. Many of the outputs are SegWit bech32 addresses, which a lot of block explorers can’t read yet — try Blockchair to read those, if you want to go sleuthing. (Example.)

Oh, and all withdrawals are suspended for a week.

Immediate consequences of the hack

Binance has reassured customers that their SAFU insurance fund fully covers the loss, and customers will not be out anything.

The SAFU fund was created after July 2018 irregularities on the exchange involving Syscoin, a minor altcoin. SAFU contains only Binance’s own BNB on-exchange token — and the July 2018 compensation to affected traders was paid out in BNB.

Binance proprietor Changpeng Zhao (CZ) did a 37-minute Periscope stream a few hours ago, after 29 hours without sleep.

BTC price in US Dollars on Coinbase last night, times in BST (UTC+1)

CZ says that Coinbase has pledged to block deposits from the hack addresses. Of course, it’s trivial to move the coins to yet another address — there’s no details as to how many transactions past the hack will also be blocked.

Jeremy Rubin floated the idea that Binance could pay the miners to roll back the hack transaction on the Bitcoin blockchain — but Binance decided this was really just not possible, let alone a good idea. 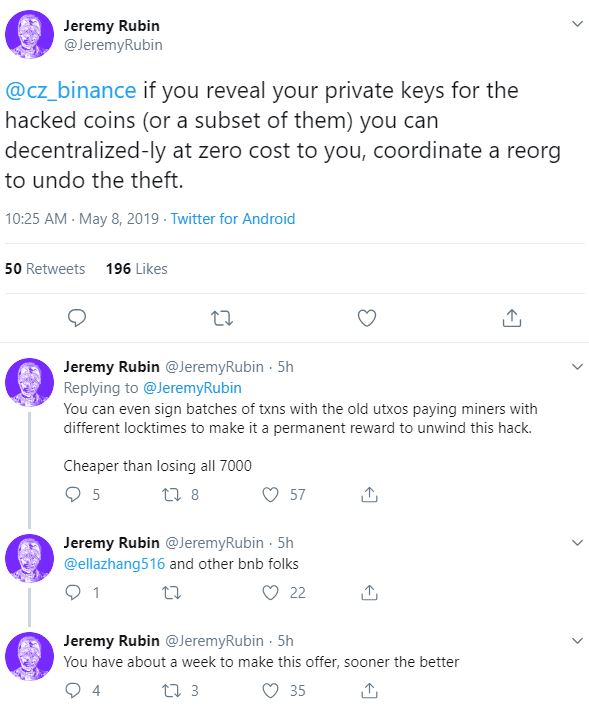 Withdrawals are suspended — for you

The important bit is that trading will continue — but Bitcoin deposits and withdrawals are suspended for a week. Your coins are stuck on the exchange:

Most importantly, deposits and withdrawals will need to REMAIN SUSPENDED during this period of time. We beg for your understanding in this difficult situation.

We will continue to enable trading, so that you may adjust your positions if you wish. Please also understand that the hackers may still control certain user accounts and may use those to influence prices in the meantime. We will monitor the situation closely. But we believe with withdrawals disabled, there isn’t much incentive for hackers to influence markets.

That’s at least 188,000 bitcoins that can’t be sold on real markets for a week. The Bitcoin price on Binance is likely to diverge wildly from the prices on exchanges still open to withdrawals.

Binance itself — and insiders — would be able to move their coins off just fine. The price differences would create remarkable arbitrage opportunities, and ability to capture what liquidity exists in the markets — for those privileged few who can still deposit and withdraw.

Binance is a Tether exchange — in fact, it’s the largest Tether exchange. (Its other stablecoins and its gateways to conventional currency have trivial volume.) And Tether has a number of serious issues at present, with Bitfinex and Tether’s problems in New York over the past week.

Bitcoin prices are already being affected by Bitfinex and Tether’s issues — there’s a massive spread between the prices for BTC-USD on Bitfinex and the prices on other US Dollar exchanges.

Though, as I write this, there’s no large spread on BTC-USDT between Binance and other Tether exchanges.

Meanwhile, Bitfinex’s — not Binance’s — cold wallet is being drained at an amazing rate — as customers rush to get their bitcoins off the exchange, to somewhere they can cash them out.

Binance customers can’t get their coins out for the next week. But, here’s hoping there’s no big Bitcoin price crash before withdrawals go back on!