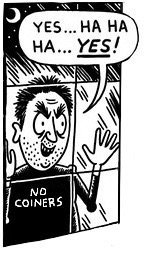 Just in case you were wondering why the Bitcoin price had dipped in the past few days, and took a great leap down yesterday evening …

Bloomberg dropped the news this morning that the Justice Department has launched a criminal probe into Bitcoin price manipulation. Justice is working with the Commodity Futures Trading Commission (CFTC) on this.

They’re not looking into anything fancy or complicated — just ordinary market manipulations, that are well-understood and routinely acted against in conventional regulated commodity markets … but which run rampant on crypto markets

Bitfinex, one of the largest and most popular crypto exchanges, is likely to be an important target for this investigation, as the CFTC has been looking closely at Bitfinex and their sibling company Tether in particular — and the manipulations they’re concerned with are extensively documented on Bitfinex, with an apparent lack of action from the exchange to suppress them.

Per chapter 8 of the book, Bitfinex lost their US dollar banking in April 2017, as Wells Fargo refused to transmit their bank wires from Taiwan to the US. They’ve spent the year since dealing in Tethers, their US dollar substitute token — a favourite of crypto exchanges who’ve lost their banking.

Every Tether is supposed to be backed by a US dollar on deposit … somewhere. The CFTC had doubts about this, and subpoenaed Tether Inc. in December.

(Bitfinex seem to have a string of smaller accounts elsewhere — Robert did a lot of the research for a great piece on their account with ING in the Netherlands — translation.)

As well as Bitfinex and Tether themselves, the CFTC subpoenaed Friedman LLC, the accountants who worked on the full audit of Tether, which was abandoned in January.

When you buy normal securities or commodities, you assume that the trading environment is regulated sensibly, and that the exchanges keep to the rules set by law — fundamentally, that they won’t mess you around.

There are various shenanigans that are banned on real exchanges for good reason, but are standard in crypto:

Spoofing is a major focus of the present criminal probe. It’s been illegal in the US since the 2010 Dodd-Frank act — the precise wording (§747) is “bidding or offering with intent to cancel before execution.”

It’s not frequently prosecuted, because it’s a crime of intent to deceive. But it’s so blatant in crypto that it would just be a matter of tracking down the perpetrators, then asking the exchanges to explain why they let this go on.

You can go onto the GDAX BTC/USD depth chart and watch the spoofing live! Sometimes the spoofing bots are too slow and the fake order gets nibbled away before they can pull it, and pop it up again $100 further away. Never believe any large order on a crypto exchange depth chart, except the immediate next one — and don’t believe that either.

The usual way to nail down a prosecution for spoofing is to use subpoenaed communications from foolish traders saying things like “hey, let’s spoof this one.”

Members of Whalepool, a site for large crypto traders, think nothing of complaining at length on the public Whalepool team chat about how they can’t commit tax crimes any more, and speculate how they could keep committing tax crimes. So we may have our sufficiently foolish traders.

What the CFTC has been looking into

This paragraph from a proposed CFTC rule from December lists many market manipulations as problems that are notably worse in the Bitcoin marketplace than in other markets:

The CFTC subpoenaed Bitfinex two days after Bitfinex threatened to sue a critic, Bitfinex’ed. I suspect that threats to sue a whistleblower got the CFTC’s full attention.

Even if you think Bitfinex’ed’s interpretations are incorrect — the documented facts are clear, unambiguous and in need of explanations.

So I’m pretty sure the CFTC is deeply familiar with Bitfinex’ed’s work, and is mining it for handy tips for the Justice Department investigation.

Founder and Chief Security Officer Phil Potter may have left Bitfinex/Tether/iFinex a few days ago, according to a video from Tone Vays. (I heard rumour of this last week, but nothing solid enough to post.) I pinged Phil to confirm or deny, though to no response as yet.