Well, that was something to wake up to: 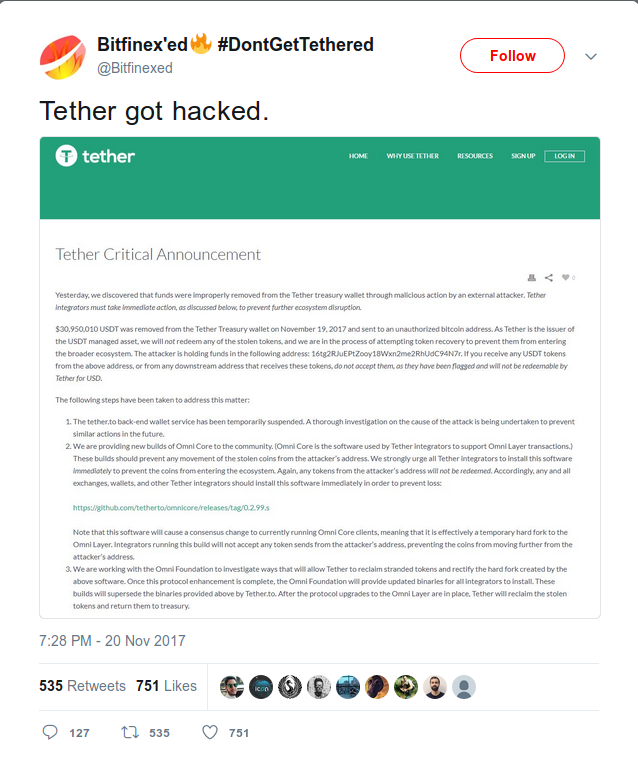 The Omni Explorer stopped working a few days ago. (It’s back up.) Then the Tether transparency site showed a balance of negative $30 million. Then it stopped working. Then Tether announced (archive) there was a slight problem:

$30,950,010 USDT was removed from the Tether Treasury wallet on November 19, 2017 and sent to an unauthorized bitcoin address. As Tether is the issuer of the USDT managed asset, we will not redeem any of the stolen tokens, and we are in the process of attempting token recovery to prevent them from entering the broader ecosystem. The attacker is holding funds in the following address: 16tg2RJuEPtZooy18Wxn2me2RhUdC94N7r. If you receive any USDT tokens from the above address, or from any downstream address that receives these tokens, do not accept them, as they have been flagged and will not be redeemable by Tether for USD.

(No Tether appears ever to have been redeemed for dollars — the amount has never gone down, and neither the “buy” nor “redeem” pages are known to have worked in recent times. It’s not philosophically impossible that they’ve literally always had more buyers than sellers, of course.)

Tethers are used as the usual “US dollar” on the sort of exchange that never saw an altcoin it didn’t like. So they do circulate, and there’s a risk that someone who accepted them in good faith as a dollar-substitute will find their money has suddenly been remotely switched off. As Emin Gün Sirer notes: “One thing is certain: if you accept tether, you now know that the ledger can be undone under you, and you will be out the crypto you traded for tether.”

(Obviously, if you accept stolen goods, even in good faith with no criminal intent on your part, you will generally still lose them if they’re tracked down. But Tethers are treated as a cryptocurrency that explicitly substitutes for money. So are Tethers money, a commodity or just whichever is more convenient at the time?)

SpeedyFlyChris on Reddit /r/CryptoCurrency details how Tether was hacked by the same person who hacked Bitstamp and Huobi in 2015: (correction: not Huobi)

Look familiar? Go to the last page, that was the wallet used to steal 19000BTC from Bitstamp back in January 2015 (and which was still receiving coins from Bitstamp as recently as September, well done guys).

An anonymous account on Twitter is lapping the entire professional financial press, which is enthusiastically printing Bitcoin puffery. https://t.co/BoEWEwUSOD

Jimmy Song also did a three-hour interview with “Bitfinexed” this morning, which finished with the news of the hack. (I haven’t listened yet.)

What does all this mean for Bitcoin? Nothing, apparently. Number go up!! I’m sure it’ll all be fine, fine.

*Just yesterday*, I was saying that Tether needs to offer a risk premium to compensate for them getting hacked. https://t.co/zVVNhAXAAS

To carry a true $0 risk premium, it has to be the case that tethers have to be operationally secure from all future failures. No CEO/CFO can abscond with keys, no bugs in underlying platform, no hacks, and of course, there is $1 USD backing every tether, and it can be redeemed.