Back in the 2017 crypto bubble, it was the order of the day to take a random idea and put it “on the blockchain,” to no technical advantage.

This was usually a bad excuse for an ICO token — here’s a 60-page white paper, don’t worry, it’s very complicated, just give us your money.

Enterprise “blockchain” hype mostly tracks the price of Bitcoin — claim cool factor from a number going up, without being so gauche as to actually touch a crypto. Enterprise blockchain promoters tend to be technically ignorant, and in it to pump their holding.

Do you need a blockchain? Basically never. I’ve followed this area closely for five years, and I’ve literally never seen a case where using a blockchain has any technical advantage over not using one, for any purpose other than doing a cryptocurrency.

But DatChat is getting play with meme-stock pumpers — continuing the short and hilarious history of using the word “blockchain” for stock pumping. And with some of the same people. 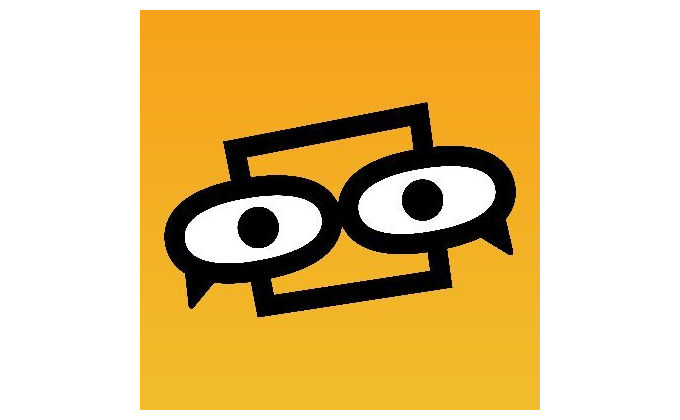 DatChat is a messaging app that uses end-to-end encryption to protect your privacy. Like Telegram or Signal.

DatChat’s secret sauce is to delete your past messages. Only those in a chat have the cryptographic keys needed to read the chat; if you need that chat to disappear, you can remove your keys, and the whole chat can no longer be decrypted — it’s effectively destroyed.

This is conceptually simple, and anyone could offer this. e.g., Signal already has chats that disappear after a certain time.

DatChat also prevents screenshots. CEO Darin Myman claims they’re working on a feature to stop the screen being photographed — “‘Super Screenshot Protection’ based on object recognition and machine learning technology,” apparently. At least he didn’t just say “blockchain” would do it. [Forbes]

So what’s the demand for this killer feature? DatChat started in 2016. After five years, the app has … 22,000 users in any given month.

DatChat’s supposed business model is enterprise sales. I’m unconvinced there are companies falling over themselves to get into auto-erasing messages that can only be read in one phone app. Maybe I’m wrong.

DatChat needs users, to pretend this idea has legs. So they’re paying influencer marketing company IZEA $1 million to get DatChat talked about in the depths of Instagram and TikTok. [press release]

DatChat was started by Myman and CTO Peter Shelus. Myman and Shelus have worked together on various disappearing message projects and companies since 2005 — when they started with BigString, who tried (and failed) to sell disappearing email messages: “allows the user to edit, recall, cancel, and erase the email, as well as insert or delete attachments, even after the email has been sent out and opened.” BigString then moved to “self-destructing instant messaging.” [Crunchbase]

Myman, Shelus and some respectable businessmen — of which more in a moment — launched a penny-stock company called Wally World Media in 2012, selling a video creation app called ReShoot. [Crunchbase]

The same team, and the same investors, started DatChat in 2014. DatChat was acquired by Sphenix, later renamed AIKido Pharma, who spun DatChat out again as a publicly listed company (NASDAQ: DATS) in August 2021. [prospectus]

DatChat only released a very small amount of stock, and there’s lots of short sellers. [Motley Fool] So the price is incredibly volatile. Just on 13 October, DATS bounced between $11.17 and $16.68.

A blog post on Seeking Alpha is boggled that the DATS stock price has gone up since the IPO, despite the company having no income, no user base, and no exclusive technology that does anything. [Seeking Alpha]

So why is this happening? Because it’s 2021, and stonks are sh-tcoins now. Meme stock Twitter is about as prudent and considered as crypto Twitter; various pumpers have been talking DATS up, in a style very like altcoin pumpers. [Benzinga]

Caleb Hannan at Sharesleuth has looked into the history of DatChat’s team and investors. [Twitter; ThreadReaderApp]

Alpha Capital was charged by the SEC for pump-and-dump fraud alongside Honig in 2018, and settled in 2019. [SEC press release]

IZEA was also involved in a network of fake stock-pumping articles in the press around 2016, which promoted Honig-backed companies. [Twitter]

I gave DatChat a spin. DatChat is very big on the message destruction features. When you first start the app, your first message thread is the DatChat system taking you though how to destroy messages or conversations.

The screenshot protection is that some messages come up “Hold to read” and you need to be touching the message for it to show on the screen. (Obviously, you can still photograph the screen.)

It’s a messaging app. You know how those work. I have no reason to think DatChat doesn’t do all the message destruction stuff the company claims for it. But also, I’m sticking with Signal for secure messaging for now, because it has users.

Currently in development, each micro-blockchain will be permissioned, private and controlled.

A Micro-Blockchain permanently deletes when it has outlived its usefulness

DatChat’s Proprietary Digital Rights Management can preset a chains life, or control it by reaching consensus of the Chain

Messages can not be forward without permission

Chains can be permanently erased by the originator

There’s a US patent application for “Blockchain-Based Communication Systems and Methods” in the name of Darin Myman. [USPTO]

Software patents are a terrible idea, widely viewed by actual programmers as a protection racket — in which patent trolls make ambit claims to obvious ideas. Triple damages for wilful patent violation is a direct incentive for a coder never to risk looking at a patent — and never mind the public disclosure purpose for patents to exist at all.

Most software patents are incomprehensibly vague, and this one is no exception. There’s something about a public blockchain, a private blockchain, and micro-blockchains. As far as I can make out, the bit that explains what DatChat thinks they can achieve with a blockchain is Figure 4: [USPTO, PDF, p5] 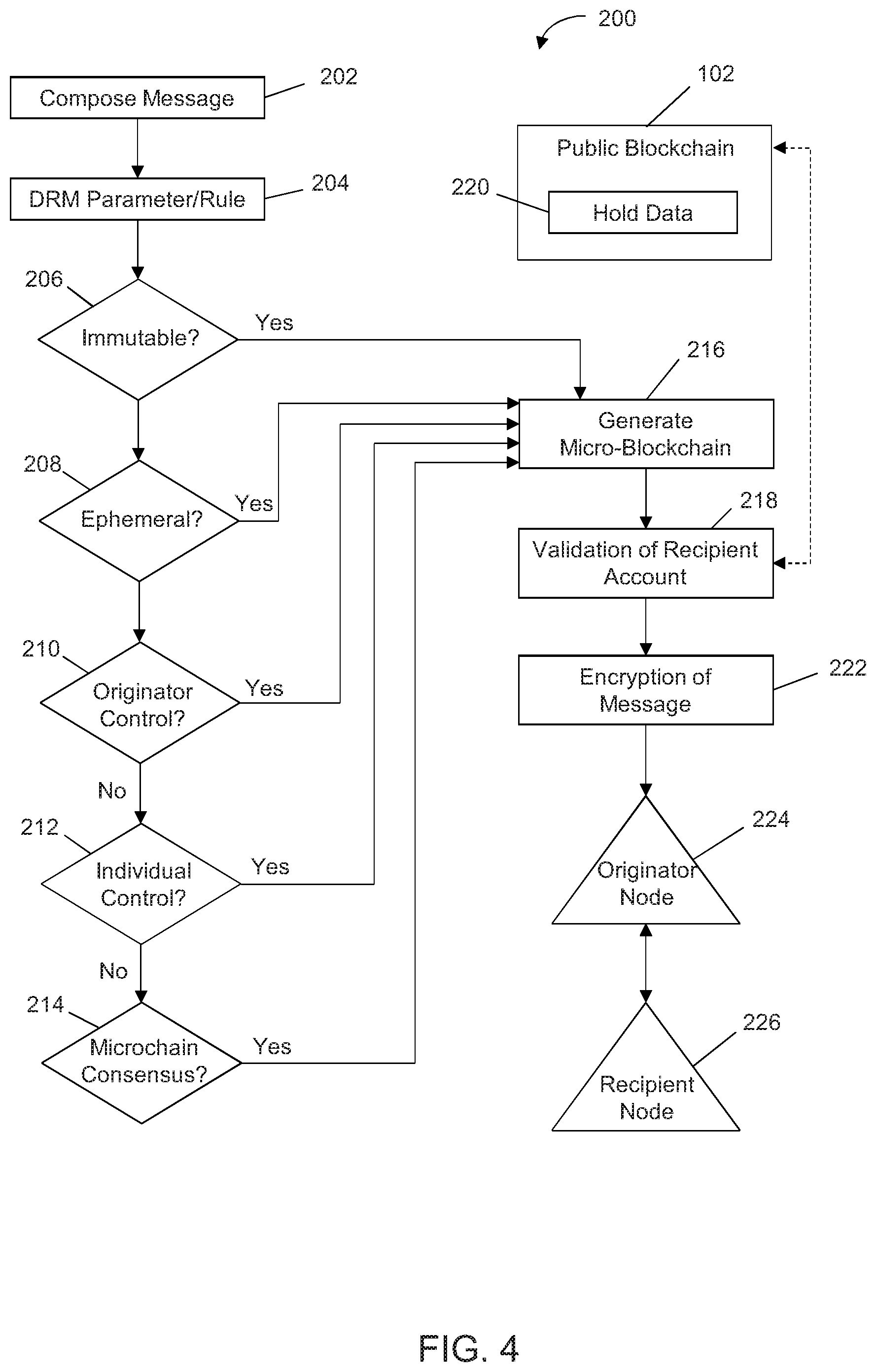 You compose a message, and set flags for what rules it’s under. The software generates a “micro-blockchain,” which I suspect is what a cryptographer would call a keyring. The recipient is validated against the “public blockchain,” which is acting as a key server. The message is then encrypted. Only the two parties can decrypt the message, with other rules according to the flags — e.g., is it ephemeral? Do both parties have control?

(I could have misunderstood this, and welcome correction if I have.)

The thing is, this doesn’t do anything that DatChat doesn’t claim to do already — or that could be done without a blockchain involved.

The word “blockchain” isn’t even being used to pump a crypto. All DatChat’s investor materials stress that they are “using blockchain technology solely for purposes of developing the privacy features and functionality as described above and we have no intention of developing our Micro-Blockchain to be compatible with, or involved in, cryptocurrency in any capacity.”

DatChat think there’s something in the word, though — they spent money to be a Gold Sponsor of Blockchain Expo North America in September this year. [press release]

The use case for DatChat

DatChat’s technical claims are quite believable, because they’re unremarkable. And it’s a nice change for a blockchain company to make claims that don’t defy mathematics. But the app has no user base, no technical moat and the blockchain doesn’t do anything.

The many respectable businessmen of flawless repute involved in DatChat might lead me to suspect DATS is about ways to make money other than selling a product people want.

Perhaps you can have some expensive fun gambling on DATS as a penny stock.

Me, I’ll be looking forward to the continuing adventures of the DatChat investor team.

4 Comments on “DatChat: a meme stock, on the blockchain”