Libra wasn’t Facebook’s first foray into payment systems. A decade ago, it set up Facebook Credits — to cash in on pay-to-win games. 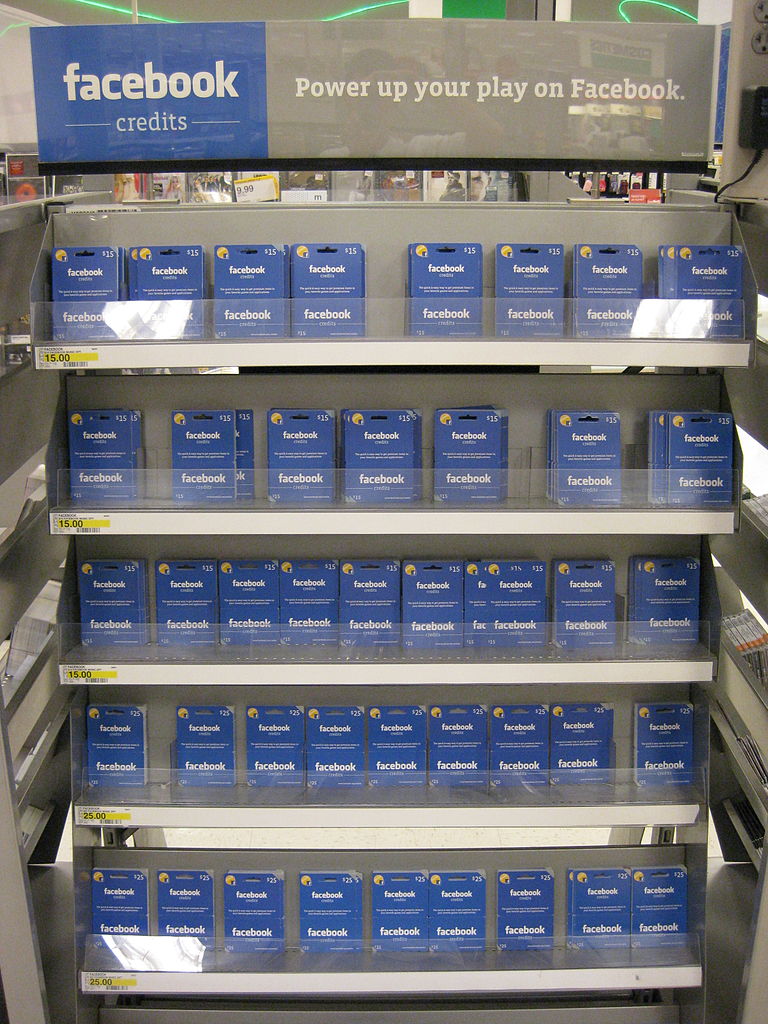 The economics of pay-to-win

On pay-to-win games, you can start playing free — but you eventually have to buy stuff to progress.

The economics of these games are pretty odious. Most of the money comes from a very small percentage of “whales” — gambling addicts, but without even the chance to win back their stake — and the games go out of their way to use psychological hooks and compulsion loops to keep them there. Games with “loot boxes” work the same way.

Everything that’s annoying in your favourite game? It’s there to extract money from the most vulnerable suckers.

Pay-to-win games weren’t new with smartphones. A decade ago, the games ran in Facebook — on your desktop PC’s web browser, in Flash.

There was a lot of money in pay-to-win — Zynga, makers of Farmville and Mafia Wars (remember those?), took in $597 million in 2010. For comparison, Facebook’s own 2010 revenue was just under $2 billion.

More than 90% of Zynga’s revenue was users buying in-game coins. PayPal said in March 2010 that Zynga was its second biggest merchant, only beaten by eBay.

Facebook saw what its platform was being used for — and decided it wanted a piece of that.

The birth of Credits

Facebook started developing an in-app currency system in late 2007. It put a system of “credits” for virtual presents into the Facebook Gift Shop in November 2008.

Facebook Credits was introduced for testing in mid-2009, and put into official beta in February 2010.

Rather than buy coins inside a game, Facebook wanted you to use Facebook Credits — ten credits was one US dollar, or about the same in several other currencies. You could buy Credits with a credit card or PayPal, or as gift cards in shops.

The idea of Credits was that an official currency for the whole platform would decrease payment friction — and increase spending.

Developers could use the getBalance interface to see how many Credits a user had, and possibly charge the big spenders more.

By February, the beta was already going well — “early testing has shown that users paying with Facebook Credits are significantly more likely to complete a purchase than the average Facebook user.”

By October 2010, 200 games used Facebook Credits — including several of the largest ones.

Credits had limitations. Developers couldn’t charge a user in fractional Credits. They could only sell virtual goods. They couldn’t sell anything related to alcohol or tobacco. They couldn’t redeem Credits for currency. They couldn’t allow users to exchange Credits with each other.

When a developer wanted to cash in their Credits, Facebook took a 30% fee. Credits also had a chargeback mechanism, for disgruntled users.

Facebook wanted Credits to become the only in-game currency — Facebook had discussed with developers in late 2009 their plans to make Credits mandatory, and Mark Zuckerberg told Bloomberg TV in April 2010 that Facebook apps would have “one currency that people use.”

All apps were supposed to switch to Credits by the end of 2010 — but developers were dragging their feet. In January 2011, Facebook set a hard deadline of 1 July 2011. You were going to use Credits.

(The loved one tells me that when she first set up an artist page on Facebook, she’d get messages daily from Facebook telling her to buy Credits to buy ads on her page. She got to the point of blocking messages from Facebook itself. The page says it was created January 2013, but evidently they were still pushing Credits that late.)

Credits in the wider world

Facebook had wider ambitions for Credits — they wanted to turn Credits into a broader system for microtransactions and small purchases. Facebook Payments Inc. was set up in December 2010, and registered in multiple US states.

Credits was also usable as a currency on Facebook Deals, Facebook’s four-month experiment in competing with Groupon — the first place you could use Credits to buy real things.

Turning Credits into a usable currency would have been a huge amount of work for Facebook, particularly on the compliance side — PayPal had enormous issues just turning a profit on small transactions in US dollars without it all being eaten up fighting money laundering.

Facebook updated its Android mobile app in October 2011 to include buying Credits — but iPhone apps couldn’t use Credits. This was because Apple also wanted to take a 30% cut, as well as Facebook’s 30%. This was a serious problem as mobile became more popular.

Facebook deprecated Credits on 19 June 2012, in an announcement to developers — “Introducing subscriptions and local currency pricing.”

So what killed Credits?

• Facebook’s user and developer base was becoming more international. Users were put off by figuring out weird currency conversion rates that changed daily. And game coins were way too expensive in poorer countries — there was no localised pricing.

• Developers did see sales increases of 5-10% — but these were eaten straight away by Facebook’s 30% fee. A developer could only use alternative payment methods if they had an exclusive partnership. Developers started actively seeking out other payment partnerships, to avoid the 30% fee and the costs of advertising to potential users on Facebook.

• Users had no reason to care about the Facebook Credits system. They’d buy Credits to put them into one or two of their favourite games — the Credits were just a way to play that game. Users didn’t tend to keep Credits on their account.

• Credits didn’t work at all like money — users couldn’t transfer Credits between themselves.

• And the big one — by this time, the desktop computer platforms that Facebook had been most popular on were being replaced by mobile phones.

Facebook offered developers the ability to charge different prices in different countries, and to offer subscriptions to games in local currencies. Users’ balances in Credits were converted back into the user’s local currency.

What Credits means for Libra

It’s not clear how hard Facebook tried to turn Credits into money people could use. Facebook Deals was the only place to use Credits for physical goods — and that was only for a few months.

The plus point for Libra is that Facebook doesn’t plan to keep all the value the system generates — there’s something in it for other players in the system.

But Libra goes beyond the Credits model, and beyond even a PayPal-style money-transmitter model — to issuing money themselves. For which Libra will probably have to set up as a bank — when they seem to have barely considered basic compliance issues.

It’s also not clear anyone with experience from Credits has even been involved in Libra.

Libra seems to have gone gung-ho into its currency ambitions — without ever considering the practical and regulatory implications. This may be fatal to the project.