The World Food Programme is a branch of the United Nations Development Group that helps food security for 80 million people worldwide, particularly in conflict-torn areas.

WFP blogged in March 2017: “What is ‘blockchain’ and how is it connected to fighting hunger?” about managing cash disbursements in Pakistan:

The first, successful test at field level of WFP’s blockchain innovation — called ‘Building Blocks’ — was carried out in January deep in the heart of Sindh province, Pakistan. As vulnerable families received WFP food and cash assistance, the transactions were authenticated and recorded on a public blockchain through a smartphone interface. Transaction reports generated were then used to match the disbursements with entitlements.

… Using the lessons learned in this first phase in Pakistan, WFP is now running a full-scale pilot in Azraq refugee camp in Jordan. At present, more than 10,000 Syrian refugees redeem their cash transfers on the blockchain-based system.

The WFP page on Building Blocks talks about this Ethereum instance (which was private, not public). The first two paragraphs are a fairly standard series of hypothetical Bitcoin promises with the buzzword changed to “blockchain,” before promising various unspecified cost savings for their cash-based assistance programme.

WFP is currently piloting a larger, more robust version of the blockchain system in Azraq Refugee camp in Jordan. Currently, more than 10,000 Syrian refugees redeem their WFP provided assistance on the blockchain-based system. As a result of this pilot, WFP will have a full, in-house record of every transaction that occurs at a particular retailer, ensuring greater security and privacy for our beneficiaries as sensitive data does not have to be shared with third parties such as phone companies. This allows for improved accounting and the reduction of third-party costs.

They’re quite pleased so far:

Originally scheduled to end on 31 May, the pilot has now been extended indefinitely. WFP will continue to explore use cases beyond cash-based transfers and potentially expand the use of blockchain technology to areas such as digital identity management and supply chain operations. 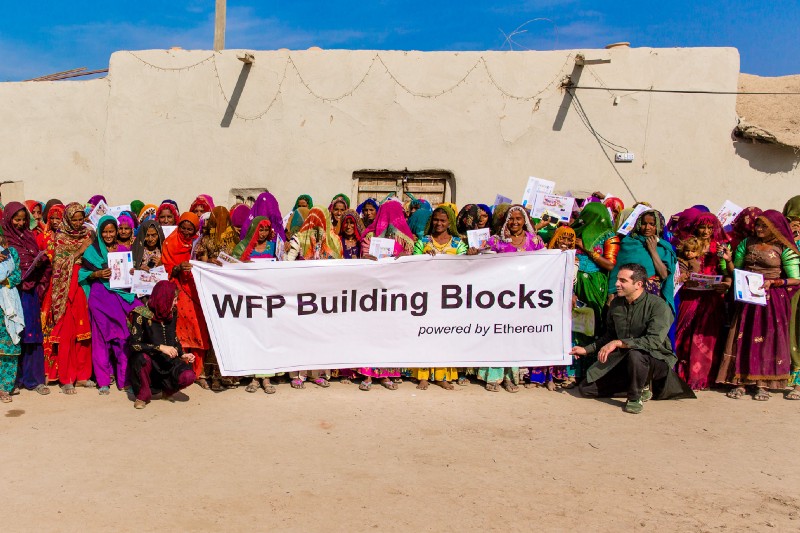 They issued a press release on 30 May, in which Robert Opp, WFP Director of Innovation and Change Management, said they aimed to “cut payment costs, better protect beneficiary data, control financial risks, and respond more rapidly in the wake of emergencies.”

Literally all the benefits of the scheme are stated as possibilities — “could,” “can,” “aims to,” “potential to” — rather than anything that had been tangibly realised in the pilots.

The Bitcoin press took to this immediately, as it does. Opp told ETHNews that WFP was cutting fees from intermediaries — though not how it was achieving this, given it’s just changing US dollars to Jordanian dinars before disbursement and keeping track of the disbursement. Futurism added that the platform had been implemented by Parity and Datarella. Datarella’s press release does not detail what they put into the project, but refers people to a CoinDesk article, which doesn’t either. Parity’s Enterprise page mentions the project in passing.

This all sounds great! Just the thing to help make a good and useful programme work better. But … what are they actually doing? What are the details? What is blockchain in particular bringing to the party?

Joon Ian Wong wrote up Houman Haddad from WFP’s 20-minute talk about the project at the Ethereum Developers Conference on 4 November:

You’ll be unsurprised to hear that the project is somewhat less than it’s been painted as.

The blockchain is Ethereum, modified by Parity to run a private blockchain without mining. So how many entities are on this exciting new payments blockchain? Er, one:

The WFP operates the chain itself, although it simulates a scenario where four parties are working together, for future expansion.

This is otherwise known as a “database,” which they’re running as a cluster of four redundant instances.

What did they gain from the move? Consolidating multiple agencies that went via multiple banks and payment channels:

There are other benefits, like increased privacy for beneficiaries, and quicker reconciliation of accounts because the agency now operates its own payment network instead of waiting for periodic reports from payments firms.

That is, the cost savings — which, to be fair, have been remarkable, dropping overhead to 2% of what it was previously — come entirely from the fact of running it all themselves now. They just happen to use a blockchain as their database.

As Matt Levine from Bloomberg put it in 2016: “The word ‘blockchain’ has managed to make that boring back-office coordination work sexy, which means that it might actually get done.”

The problem they have now is that nobody else, inside or outside the UN, is interested in joining their private blockchain. Haddad blames “the internecine bureaucracy at the UN and the desire of managers to guard their own turf,” rather than normal people reacting as they usually do to blockchain evangelists with that look in their eyes. edit: not an accurate quote, see comment from Haddad.

Haddad is very into doing this on the blockchain in particular — the idea came up in discussion at Singularity University in 2016 (more transhumanists!), and he only ran this on a private blockchain because the public chain couldn’t handle the transaction load, though he’d still love it on a public chain if zero-knowledge proofs ever make it to Ethereum. Not stated was what the beneficiaries would get from having their payment history and iris scans on the public Ethereum blockchain forever.

Nonprofits have the same hopes for blockchains as for-profit businesses: anything to make the bureaucracy run more efficiently. But what the WFP achieved here is from managing the disbursement themselves, and the “blockchain” is just being used as a database — which is what a “permissioned blockchain” really is.

It’s important to note that “blockchain” doesn’t get you this for free — as chapter 11 of the book notes, a blockchain won’t replace your back-office systems without as much work, time and money as any other software replacement project. Paul Currion from Disberse, another disbursement-on-the-blockchain effort, notes that:

the hard work is integrating blockchain technology into existing organizational processes — we can’t just hand people a ticket and expect them to get on the high-speed blockchain train.

And … you don’t need distributed computing, simulating a competitive cryptocurrency system without the cryptocurrency or the competition, just to manage a database that’s under your organisation’s control anyway.

14 Comments on “The World Food Programme’s much-publicised “blockchain” has one participant — i.e., it’s a database”