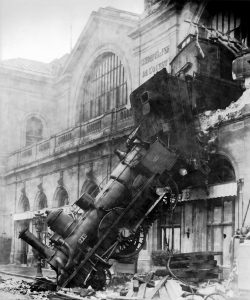 There is a railroad that is shared by two train companies. The trains of traditional Company A carry only 2000 passengers and used to come 10 minutes apart, on average. They are effectively at full capacity and often there are tens of thousands of people waiting at the station. (Not long ago, 230’000 were waiting at one point.)

The trains of Company B started running only 10 weeks ago. Each train can carry 16000 passengers, and one train was supposed to come every 10 minutes too.

However, the management of Company B is totally amateurish and their marketing is a failure, so much so that trains still run mostly empty. Passengers and businesses totally ignore them when shopping for transportation. Even though B train tickets are $0.02 apiece, users still prefer to pay $5.00 or more to scalpers for A train tickets.

Moreover, the two companies have failed to find a stable arrangement for sharing the right of way on the tracks. As a result, there are times when the trains of Company B arrive only once every two hours, and other times when they come once every minute. Company A has suffered less so far, but there have been times when its trains came 20 minutes apart, because of that contention.

Adding to the mess, the management of Company A is suffering an internal dispute that is expected to lead to the breakup of the company into two independent lines, A1 and A2, a month from from now — both aiming to 1 train every 10 minutes, but with 2000 and 4000 passenger capacities, respectively.

So, what metric should we use to compare the two companies?