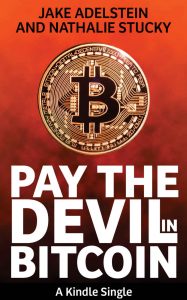 A short book on the collapse of Mt. Gox, based on the authors’ work over the past few years on the story for the Daily Beast. The book badly needs an editor, but does have bits worth the read. Also, it’s cheap.

Pay the Devil in Bitcoin was written with the cooperation of Mark Karpelès, the proprietor of Mt. Gox at the time of its collapse, and former Mt. Gox employees. The authors also claim documents from insiders and officials, including ones covered by NDA or legal restrictions. “I’m about as fond of Karpelès as I am of his cats, but I do believe that he has been dealt an unfair hand.”

The worst thing about writing a book about Bitcoin for a general audience is that before you can get to the fun bits — incompetence, crooks and incompetent crooks — you have to start with explaining what on earth a bitcoin even is. They get around this reasonably neatly by quoting an IRS agent explaining it to a judge, which I wish I’d thought of for mine. There’s some interesting new bits of trivia, e.g., that the kanji version of “Satoshi Nakamoto” is not from Nakamoto himself — it was made up by Momoko X, a Mt. Gox employee, for the Japanese translation of the original Bitcoin white paper.

Chapter two introduces Mark Karpelès. Much of this is space-filler and gets tawdry. The authors tracked down Karpelès’ former lovers: “They say he has the ability to ejaculate large amounts of sperm at some velocity.” That’s more than I wanted to know about Mark as a person, really.

Chapter three covers the Silk Road, which they speak of as still existing (“That market was, and is, called Silk Road”), making out that a copycat called “Silk Road 3.0” is in any reasonable sense a continuation of the original. They posit that there’s any reasonable doubt that Ross Ulbricht was Dread Pirate Roberts, founder and operator of the Silk Road for its entire history, which there really isn’t. The coverage here of ransomware is a bit glib, implying it was invented or at least popularised with Bitcoin, rather than dating back to the late 1980s and only becoming endemic with 2015-era malware kits. There’s a disconnected story of someone trying to blackmail Roger Ver.

Chapters four to six cover the history of Mt. Gox. Chapter four in particular is noticeably more focused and better-written than what comes before, I suspect because it’s based directly on their work for the Daily Beast and so benefited from editing. These chapters are good, useful and substantial.

You’ll have first seen some of this material in Adelstein and Stucky’s May 2016 Daily Beast article “Behind the Biggest Bitcoin Heist in History: Inside the Implosion of Mt. Gox.” (This piece was a useful source for chapter 4 of my own book.) They were sent an anonymous printed document dump, which they confirmed with former Mt. Gox employees and unspecified other sources. That’s where we first learnt of Jed McCaleb’s response to Karpelès discovering the exchange McCaleb had just sold him was already insolvent: “Maybe you don’t really need to worry about it.” As Karpelès puts it in this book: “What I’d bought, though, was a lot like a treasure chest with a bomb inside.”

Chapter seven starts with an interview with Kim Nilsson of WizSec, the copy having been fact-checked with Nilsson. This is short but of value. The rest of the chapter is about the problems of the Japanese justice system — trials as “absurdist farces that all end with the same last word: guilty.” It ends with a long writeup of the Oni Koroshi (“Demon Killer”) hacker case, which is decently written and makes good and important points, but left me thinking “yes, but why are you telling me all this in a very short book that’s supposed to be about Mt. Gox.” It gives the impression of having been recycled from elsewhere and tacked on.

The book was published in September 2017, and the epilogue covers Karpelès’ July 2017 court appearance and the WizSec post-mortem on Mt. Gox. The body of the book, however, appears to have been finished up in late 2016, with nobody going through to update the story — e.g., “The purpose of Willy bot is still not completely known. Did it exist to cover up losses or steal bitcoins? And who put it there?” Of course, it was at the July 2017 court appearance that Karpelès admitted that he’d run Willybot, to pump the price of bitcoins and make up Mt. Gox’s losses.

Pay the Devil in Bitcoin tells an interesting tale, though it demonstrates why editors exist — it gets sloppy and rambling, with multi-paragraph slabs that could do with cutting. But if you’re interested in Mt. Gox, it’s got some good new stuff in it, though you’ll probably want to skip straight to chapter four.

2 Comments on “Pay the Devil in Bitcoin: the story of the collapse of Mt. Gox”