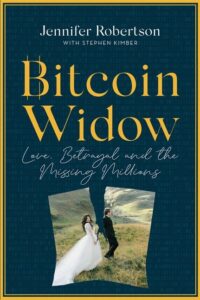 Jennifer Robertson is the widow of Gerald Cotten, the serial scammer who founded the QuadrigaCX crypto exchange and stole between CAD$190 million and CAD$250 million of his customers’ money. I obtained a draft proofreading copy of her autobiography. The book is out in January 2022. I don’t recommend it.

It’s utterly unclear to me why this book exists. It’s 334 pages of Robertson justifying herself. But the money’s gone, and it’s not coming back. Jennifer was allowed only her wedding ring, her car and some personal effects and has to work a normal job now. There’s no litigation in motion. The Quadriga trails are all cold. Why did Robertson think this was a good idea?

Robertson is not interesting. Nobody will pick up this book for any reason other than the collapse of Quadriga — but there’s nothing here that will change your mind about Quadriga or its collapse.

Jennifer meets Bitcoin entrepreneur Gerry Cotten on Tinder, a year after he and his friend Michael Patryn started a Bitcoin exchange called Quadriga Coin Exchange, or QuadrigaCX. Jennifer likes Gerry and moves in with him. Gerry pays for everything with his Bitcoin money.

We get Robertson’s sense of Cotten — a standoffish opinionated nerd, who doesn’t like people much, but is very charming and much loved when he does get out and meet people. Cotten encrypts everything; Robertson doesn’t understand the technical details.

“So the truth is, I didn’t know all that much about Gerry or his business.” Well, so much for the one reason we’re reading this. Robertson stresses repeatedly how she didn’t know so many things.

Quadriga can’t get real banking because it’s dodgy as hell — I mean, because banks don’t understand Bitcoin. Robertson establishes Robertson Nova Consulting to be one of Quadriga’s “payment processors” — let none say “money mule.” She also helps Cotten mail envelopes full of cash to customers — in the manner of absolutely zero reputable financial businesses, but quite a lot of criminal enterprises. “Should I have asked more questions?” Robertson asks.

Robertson lets Cotten run everything in their financial lives. “‘Here,’ I said to him at some point. ‘Here are the passwords to my accounts. You take over.’”

Cotten and Patryn fail to list Quadriga on the public stock markets in 2015. They split in 2016, and Cotten runs the exchange all by himself.

(Robertson finds out in 2019, when Quadriga has collapsed, that Patryn and his partner Lovie Horner together still owned more of Quadriga than Cotten did. Robertson has still never met Patryn face to face.)

Robertson and Cotten travel the world. Cotten wins $900,000 in online gambling, supposedly, and puts it into Robertson Nova Property Management, so Robertson can buy houses to rent out. She emphasises how she was a nice landlord, not like those nasty landlords.

Everything’s going swimmingly, they’re travelling the world and spending money like water. But CIBC freezes $28 million of Quadriga money in early 2018, and Cotten is stressed. Bitcoin is crashing, and the customers want their money back.

Cotten gets more stressed, and sicker and sicker from Crohn’s disease. Robertson and Cotten go to India. Cotten dies. A panic ensues as everyone tries to recover Quadriga from Cotten’s locked laptop. After a month of Cotten being dead and Quadriga not giving anyone their money or cryptos, Robertson finally admits publicly that Cotten has died.

Robertson details all the ridiculously sketchy-looking stuff she did in the month after Cotten’s death, claims her complete innocence in all regards, then calls the doubters who pointed out the sketchiness “conspiracy theorists.”

Amy Castor gets a mention. I think she’s the only critic of the farrago of nonsense at the time who’s called out by name:

Amy Castor, a freelance journalist who “focused on cryptocurrencies and financial fraud,” would later add more fuel to this fire when she described me as “moving aggressively to protect her newly acquired assets.”

That was because Robertson was doing literally that thing — putting Cotten’s assets into her own name before the court had been called in. I’d call that relevant to the public interest, given Cotten’s exchange had just collapsed with a $200 million hole in the accounts. Robertson doesn’t seem to think so.

In fact, the quote is from a blog post by Castor about one of the Ernst & Young CCAA monitor reports — the stage before bankruptcy — referencing a story in the Halifax Chronicle-Herald about how Robertson “took her deceased husband’s name from the ownership of the four properties, worth a combined $1.1 million, then took out collateral mortgages on all four in favour of a trust of which she is a trustee, and finally transferred ownership of at least two of those properties to that trust.” But Robertson goes after the blogger for talking about it. [Amy Castor; Saltwire]

The doubters turn out to be correct — Quadriga was a scam all the way down. Cotten was a serial fraudster, who had joined with Patryn to run Ponzi schemes from age 15. He lied to Robertson, a whole lot, about everything to do with Quadriga and his entire personal business history. The stress of the Quadriga bankruptcy drives Robertson to the point of attempting suicide.

Robertson comes across as deeply incurious — but only about the tricky details. She paints herself as very interested in everything in the world — except the details of her life partner, or of the business he runs that she participates in and they live off. That bit, she just trusted him on.

There’s a known phenomenon of confidence tricksters who completely fool their partners, often leaving their partner as the patsy for their crimes. I don’t know if that was one of Cotten’s contingency plans, but that sort of relationship would help explain Robertson’s ridiculous incuriosity.

Robertson comes across to me more as a fool than a co-conspirator, so I guess the book did its job. I’m assuming that no checkable statement of fact in the book is a lie — ’cos you can bet the aggrieved creditors will be going over it with a fine-toothed comb. Robertson is much more upset about journalists questioning her bona fides than she seems about the 76,000 people her husband ripped off.

I wonder about things the book doesn’t mention. I’m thinking of the famous photo of the stovetop with uncashed banker’s drafts on it [Twitter] — Quadriga customers sent Cotten money, and he didn’t even bother depositing it for two years. As if the retail exchange was just a façade, and the real business was to launder cryptos out — like a car wash with massive turnover, but no visible customers.

Cotten supposedly took bitcoins from Quadriga and used them to trade altcoins on other exchanges. Were Cotten’s altcoin gambling losses really him laundering bitcoins out for his real customers? Quadriga is known to have been used to cash in dirty bitcoins. That stovetop is something I’d really like to ask Robertson about.

The book fills in some details — though not nearly enough — of the Quadriga story. But I don’t trust this narrator’s reliability.

If you want a quick introductory summary of the story of QuadrigaCX, read the Vanity Fair article and the Ontario Securities Commission report [Vanity Fair; OSC] — and not this book.

If you’ve been closely following the saga of QuadrigaCX since the exchange’s collapse, I suppose this is a document you should read. I thought I was that interested in Quadriga, but perhaps I’m not. 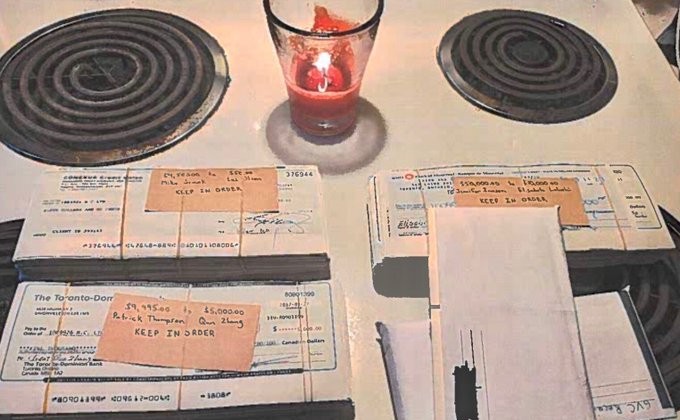 8 Comments on “Jennifer Robertson: Bitcoin Widow — Quadriga? I know nothing! Nothing!”