by Andrew Molitor and David Gerard

ConstitutionDAO looks too weird and dumb to be real.

One of thirteen surviving copies of the first printing of the Constitution of the United States of America is up for sale at Sotheby’s New York, on Thursday 18 November 2021 at 6:30pm eastern time. [Sotheby’s]

A bunch of crypto holders, calling themselves ConstitutionDAO, are asking for donations of ether to win the auction and buy the document. As we write this, they’ve collected $5 million in ETH.

ConstitutionDAO launched seven days before the auction. Their organisation is somewhat … sloppy.

No, the crypto bit absolutely doesn’t do anything useful, except generate marketing buzz. 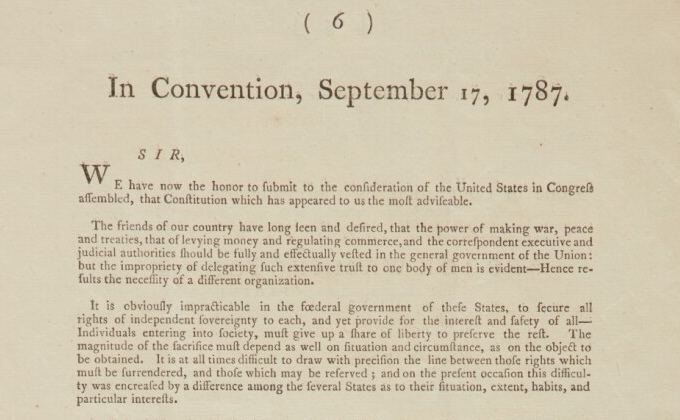 The DAO you do when you’re not doing a DAO

“DAO” stands for Decentralised Autonomous Organization. You get a pile of cryptocurrency, and holders with the right tokens to vote decide what to do with the crypto.

DAOs have a less than illustrious history of crashing and burning in fraud and hacks — it turns out that “code is law” is not very smart.

So ConstitutionDAO is doing things more simply and elegantly — they’ve set up a multi-signature address with thirteen signers, where all the ETH gets deposited. It’s just a crowdfunding. The “DAO” bit’s connection to the money is more of an idea, you understand. [Twitter]

The completely and utterly centralised control of the project in all practical terms has led to some disappointment amongst those who bought the “DAO” pitch — but hey, it’s not like they can do anything about it. [Twitter]

The ConstitutionDAO founders say they’re setting up a Delaware LLC to front for this unincorporated bunch o’ guys who just got sent $5 million of ETH.

Everything is a gentleman’s agreement so far, worth only the paper it’s not written on.

If ConstitutionDAO doesn’t win the auction, the funds will be returned via Juicebox, the platform they’re collecting the money on.

Will the core team receive any of the raised funds for themselves or get compensated in any way from this?

The core team has not received or pre-minted any tokens. Following the purchase of the Constitution, we intend to submit a proposal to be voted on by the community. While this is unusual, we believe that it establishes a precedence of mutual trust between the core team and the backers of the ConstitutionDAO.

Notice how this doesn’t answer the question.

On the ConstitutionDAO Discord chat, Will Papper, one of the multisig signers, says

Delaware LLC. Minimal operating agreement for now while we finalize details. The LLC allows us to bid on the Sotheby’s auction. Sotheby’s does not allow DAOs themselves to bid. “ConstitutionDAO LLC” but it’s still being set up. Need to consult more with securities lawyers we work with on this (since fractionalized ownership could be a security).

Normally you’d think further ahead than this when asking the public for $20 million. This almost makes us think they really did organise this in a week, and it wasn’t all planned well ahead of time.

Sotheby’s has apparently confirmed that they will accept an Ethereum address full of ETH as proof of sufficient funds to bid. Sotheby’s also requires full Know-Your-Customer on bidders — hope ConstitutionDAO gets that LLC set up in time!

The Discord community moderators assure us that “everything has been worked out in the background” and “the team is working 18h+ hours shift!!”

Packy McCormick is not a multisig signer, but he’s been doing a huge amount of the publicity. McCormick is one of those “entrepreneur” newsletter guys who doesn’t appear ever to have done anything. [LinkedIn] McCormick says he just joined venture capital firm Andreesen Horowitz’ crypto team, though. [Twitter, Substack]

This gibbering idiocy made it to CNBC, who never saw a blitheringly stupid crypto notion they didn’t like. CNBC did a video interview with Packy McCormick and Alice Ma, one of the multisig signers. [Twitter, video]

Another multisig signer is Joshua Austin Cain, a licensed financial advisor at wealth management outfit Rollins. He knows precisely how to handle other people’s money with probity, and he did … this thing. [LinkedIn; Rollins Wealth Advisors]

Cain has a crypto-pumping Substack, where he’s another newsletter guy “entrepreneur” with no publicly visible entrepreneurship. [Substack; Twitter]

Coincidentally, there’s a guy who used the name Austin Cain who was alleged to have run a Bitcoin investment scam in 2017. I’m assuming it’s not the same guy. [Steem; blog post; YouTube; Facebook]

ConstitutionDAO and Juicebox: the flow of cash

ConstitutionDAO is using a platform called Juicebox, which is another DAO. Juicebox was launched in July 2021. [Juicebox.money; Juicebox blog]

The code for Juicebox is all public on GitHub, [GitHub] and it’s substantially by one guy who never seems to have done anything else — a single-use pseudonym? — called Jango (@me_jango on Twitter). Jango is also one of the ConstitutionDAO multisig signers.

The Juicebox platform takes 5% of the incoming ETH, and they give the project JBX tokens in return. So that’s $150,000 in ETH so far from ConstitutionDAO, which gets JBX magic beans.

If ConstitutionDAO raises $20 million, Juicebox would take $1 million, a large slice of which goes to the founders. Not too bad a payday.

ConstitutionDAO is the big offering running on Juicebox. There’s also Shark DAO, which is a group of people — “Jango, Kenny, Goldy and defi jesus,” apparently — buying NFTs from another DAO, Nouns DAO. Sharkbox has taken in ETH and has some JBX tokens. [Medium] There’s a smattering of smaller projects. [Juicebox]

How will this one crash and burn?

ConstitutionDAO and Juicebox both appear to be very complicated handwaving to make you not look too closely at the flow of cash, and not notice the bits that look very like a simple money funnel.

The founders … don’t have an actual plan for what to do if they win the document. They say they’ll ask the DAO members. [Forbes]

If they don’t win, then the ETH is apparently returned via Juicebox. If they win, then … it’s not clear what happens next.

Does the LLC principals saying things in a Discord chat constitute a contract with the ETH donors? (In securities law, it would 100% count as representations concerning an investment offering.) Will they get the LLC together in time? Just how hard will doing stuff fast and sloppy bite them in the backside?

Either this is an elaborately preplanned rugpull — or it’s actually the dumb stunt it appears to be.

Update: ConstitutionDAO didn’t win. Aww! It helps not to let your opponent in the auction know precisely how large a pot of money you have, and when you’ll have to tap out.