After a well-received technical talk to a keen audience on the other side of the world, Ethereum Foundation developer Virgil Griffith is on the short list for a new contract with the US Government — who will even pay his room and board for the duration!

Griffith was arrested by the US on Thursday 28 November for going to North Korea for the 2019 Pyongyang Blockchain and Cryptocurrency Conference — and teaching the DPRK how to evade US sanctions, on the blockchain. Here’s the indictment (PDF), which was filed on 21 November.

Griffith is a US citizen, and it’s illegal for a US citizen to travel to North Korea without explicit permission from the State Department — which he asked for, and they refused. He went anyway — tweeting about his trip, posting his visa for North Korea, and encouraging others to come to the conference with him. 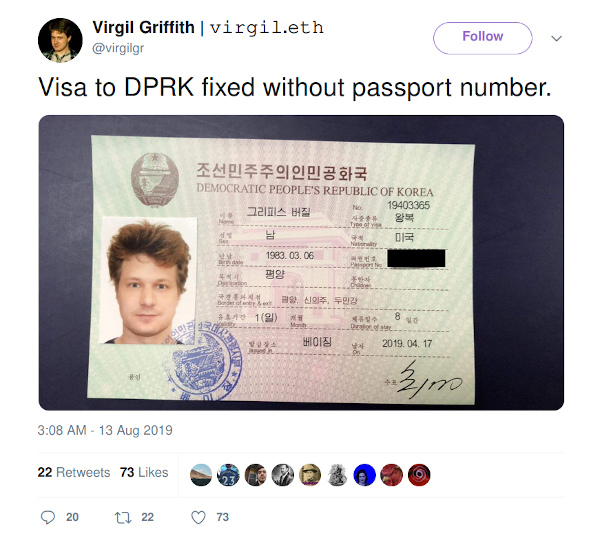 The Department of Justice claims Griffith helped transfer cryptocurrency between North Korea and South Korea, a slam-dunk violation of the International Emergency Economic Powers Act — and that Griffith literally told this to an FBI agent in an interview.

Ben Munster wrote about the conference in Decrypt in September, quoting at length an “anonymous attendee” — who said that “the main things (the North Koreans) were interested in were using Bitcoin to get around sanctions, and using Ethereum for U.N.-less courts.”

By the way — the February 2020 conference is open for registration! Unless you’re a journalist. Passports from South Korea, Japan and Israel are not welcome, but US passports are — “we will provide a paper visa separated from your passport, so there will be no evidence of your entry to the country.” 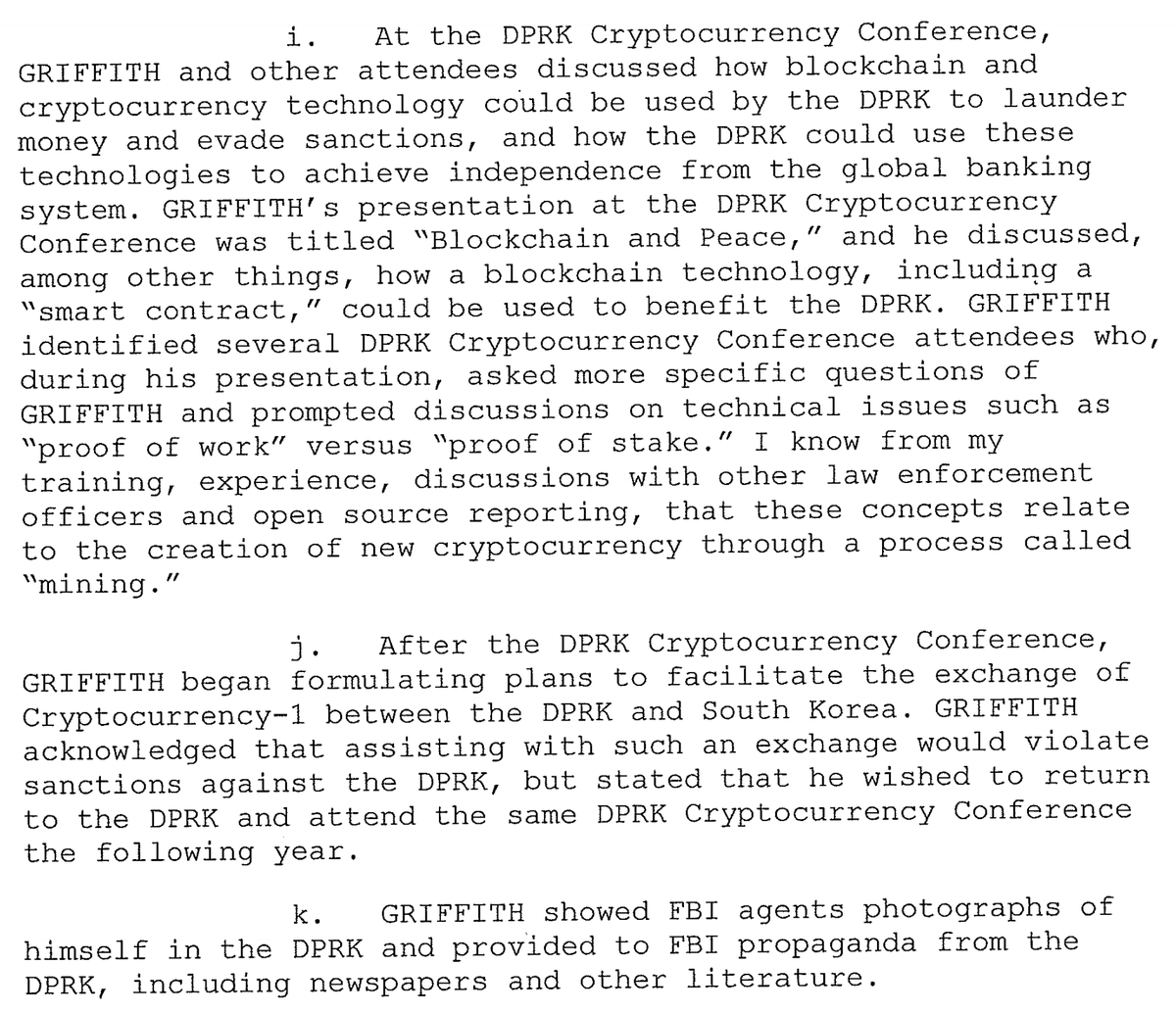 Griffith is a research scientist with the Ethereum Foundation, working on mainnet and enterprise development. (Vitalik Buterin on Griffith’s trip: “enjoy.”) The Foundation has disclaimed all involvement — “We can confirm that the Foundation was not represented in any capacity at the events outlined in the Justice Department’s filing, and that the Foundation neither approved nor supported any such travel, which was a personal matter.”

Griffith sure went out of his way to make friends — he was kicked out of the Tor project for collecting, then attempting to deanonymise and sell, user data to INTERPOL and the Singaporean government. And this tweet is only one of several stories I’ve heard about Griffith as tech conference sex pest.

I encountered Griffith’s work in 2007, when he did WikiScanner — a tool to show which organisations were editing Wikipedia anonymously — and I was answering the calls from the press to Wikipedia about it. I remember Griffith seeming surprised that we actually liked the project.

An ex-friend laments the Virgil he knew — “a few years ago I watched him get sucked into the same vortex as many others I knew back then … His feeds started featuring race-and-IQ material and such … not the Virgil I met in the 2000s.” Griffith is also into the LessWrong rationalist subculture and neoreaction.

His website is virgil.gr — “Life is a MMORPG. Grind. Level up. Conquer the world.” OK coiner.

Griffith’s arrest has provoked Amy Castor to start blogging again! Preston Byrne considers that the Ethereum Foundation really should have known better — “Yes, North Korea using your coin will drive up demand for that coin. But it’s North Korea … Anyone who made a lot of money in Ether should understand that just because you made one good investment back in 2014, and haven’t had to do any real work since, doesn’t mean you are a polymath. More likely, you’re a dumbass and you got lucky.” 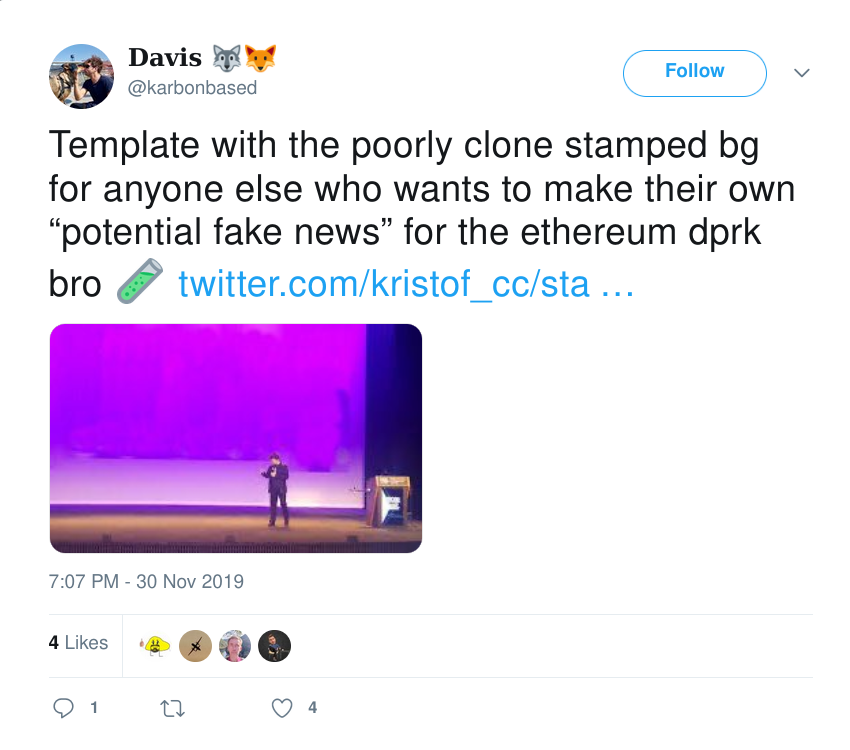 Valiant crypto defenders are already comparing Griffith to Silk Road operator Ross Ulbricht, and I fully agree — both had garbage-tier operational security, that primarily consisted of a nigh-impenetrable shield of narcissism.

Nick Johnson from the Ethereum Foundation tweets what he thought the guy was doing — Virgil Griffith seriously, literally, thought that he could personally, singlehandedly, through the power of his own intellect, bring peace between North and South Korea … if only those dum-dums in the US Government would let him apply ENOUGH BLOCKCHAIN.

There’s engineer arrogance, and then there’s whatever heady brew Griffith was huffing.

4 Comments on “Virgil Griffith arrested over North Korea visit — engineer arrogance, but on the blockchain”