Bitcoin believers — often the same Bitcoin believers — will say whatever they think is good news for Bitcoin at that moment. From anarcho-capitalism and replacing the International Bankers, to stablecoins and institutional investors.

Because “NUMBER GO UP” is the only consistent Bitcoin ideology.

The phrase itself — without a “the,” for ungrammatical effect — has long been used wherever Goodhart’s law applies — “When a measure becomes a target, it ceases to be a good measure.”

But who first applied “number go up” to cryptocurrency?

This came up in a Twitter discussion today, when it was mentioned by Chris DeRose. So I went looking.

The earliest “number go up” I’ve found in crypto discussion is from SomethingAwful — not the Buttcoin thread, but one of the other SomethingAwful crypto threads at the time — in a comment by user Blade Runner, on 5 October 2017 (archive), as the crypto bubble was in full swing:

It’s legitimately amusing to see a Ham shoe shine boy incessantly screeching with no knowledge of how Buttcoin works beyond “NUMBER GO UP, ME COULD HAVE HAD BIG NUMBER, GOON BAD”

There are many reasons that it’s a terrible investment, and these have been explained over and over again, and yet the man continues to screech while pointing at an imaginary number inflated by ridiculous amounts of margin trading on an exchange that can’t be withdrawn from

It was promptly adopted both on that thread and the main Buttcoin thread. Particularly by me.

The earliest crypto Twitter “number go up” without a “the” that I can find is from @VexingCrypto talking about their WaltonCoins, on 15 November 2017. Though it wasn’t in the present sense: 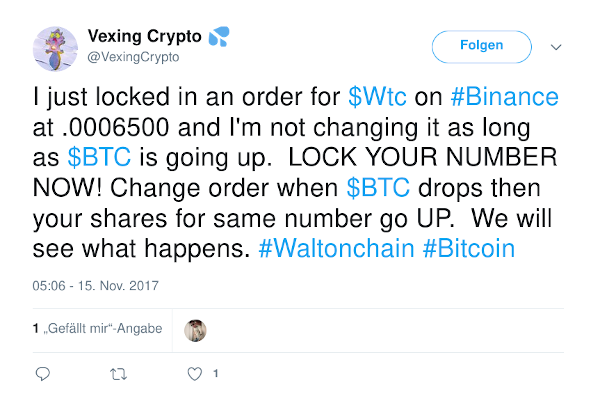 The first usage I can find on Twitter in the present usage seems to be from me, on 9 December 2017, about proof-of-work crypto mining:

PoW is a kludge, a terrible one. it was literally never an actually good idea. and bitcoin had substantially recentralised after five years anyway. now it's just a complete waste. and as other coins have shown, nobody actually cares about 51% as long as number go up.

@buttcoin used it the next day, about Iota:

because number go up

Since then, the number of “number go up” continue only go up. BULLISH! TO THE MOON!!