The Alphasmart Neo 2 is a standalone word processor. It’s a keyboard with a memory, and no Internet. It runs for a year on 3 AA batteries.

The Neo 2 comes highly recommended by a pile of writers who have the same problem I do: a ton of distractions, and no attention span. A keyboard that doesn’t have Twitter an alt-tab away!

It was manufactured by Renaissance Learning, who marketed these to schools, mostly to teach typing. They fell to the advent of netbooks and then cheap tablets, and were discontinued in 2013. But there are still plenty second-hand.

There’s so many fabulously retro things about the Neo 2. The design and the technology are straight out of the late 1990s. Squidgy dark-grey plastic design! LCD! Infrared networking! Weighing about twice what you’d think it should!

I bought mine for $49.95 (plus shipping) with some Amazon gift certificate dollars that were stuck on Amazon US, which I couldn’t use for much else. You can find them for $20 if you look.

(This is a worked example of why the standard ICO scheme “print our own industry-specific company scrip” was always a dumb and bad idea. We have general currencies for a reason.)

I wrote the first version of this post on the Neo 2 itself. 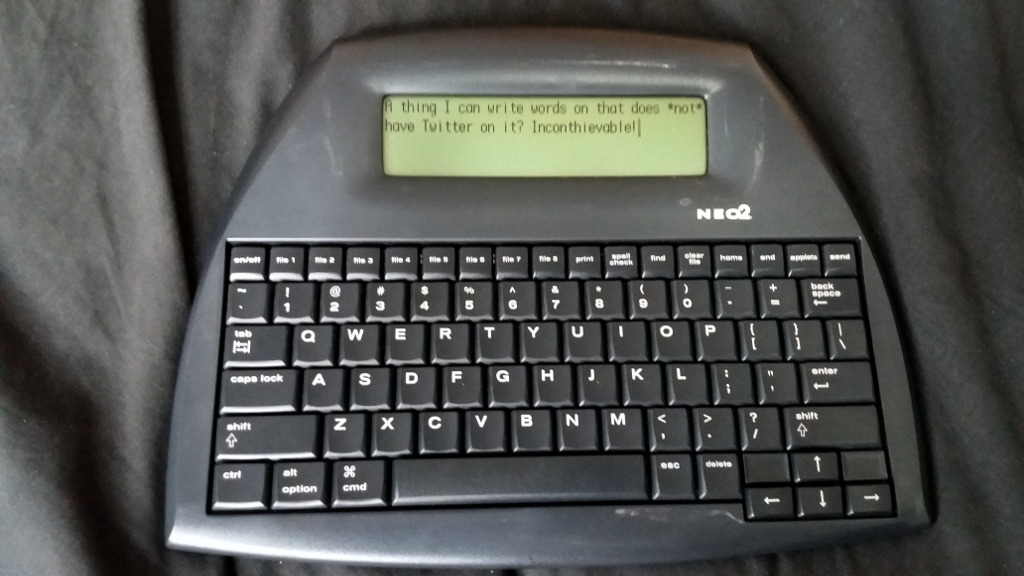 I have a book to finish — working title “World’s Worst ICOs” — which I’ve barely been moving forward on.

I was considering a folding Bluetooth keyboard, to use on the train to type on my phone. But these things aren’t in computer stores like Curry’s, and I’m not going to risk fifty quid sight unseen, and keys untyped, on a weird tiny keyboard I may well hate. Renaissance used pretty ordinary full-sized keyboards, so I was happier to risk an AlphaSmart.

The Neo 2 is heavier than I’d been hoping, at just under a kilo — much heavier than a tablet, say. I might try commuting with it, though — it’s lighter than my laptop.

The Neo 2 has a flat keyboard with mediocre keys — comparable to a generic £5 keyboard from Tesco. A bit mushy. But not unusably so.

My usual keyboard is either my laptop (Lenovo X250) or the lovely Microsoft Natural at the office. I used to have an IBM Model M, on which 60 words per minute required ear defenders. In an ideal world, I’d have a Natural with mechanical keys.

So, just now, the Neo 2 successfully defended me from myself — I couldn’t alt-tab to a browser window to search for “natural keyboard mechanical“. I’ll do that later.

Little hiccups along the way:

I’m trying the keyboard lying in bed, typing with it in my lap. It’s a bit strained — not ideal for writing in bed.

That said — I’m doing words. I’m observing thoughts, formulating them into sentences and typing them. Editing can come later.

It works better sitting up. I used it to take notes while watching Crypto — lying back on the couch, Neo 2 in front of me, tablet propped up behind it playing the movie. It was not bad! It’d be completely usable at a table or on a train.

You connect the Neo 2 to your computer with a USB cable, and it shows up as a keyboard. Open a text editor on your PC, press “send” on the Neo 2, and you can watch it type your text into the editor.

Sending my notes to a Google doc on my laptop was annoyingly slow, and I hit a bizarre edge case — mine has a US keyboard, and it sent to the laptop as if it were UK layout. So ” turned to @ all the way through.

Should you get one?

Heck, I dunno. I’m still not sure I should have got one. I’m enjoying the new gadget and producing words, though, and maybe soon they’ll be words for a book!

I ordered my Neo 2 from this page on Amazon US. Mine came from Detroit Packing Co. I ordered it Friday 5 April and it arrived Friday 12 April. They delivered it decently-wrapped, and even included three AA cells from Amazon Basics!

I can’t find a good Amazon UK page for the Neo 2, which surprises me. But it shows up on eBay from time to time, as do its predecessors, the previous Neo and the 3000. Some have the official carry case as well.

And, of course, someone’s made a start on hacking and extending them. Someone did new display fonts. There’s a Flickr discussion group too.