BattBump — the app to wirelessly charge a phone from another phone — and which I managed not to call ButtBump or BattButt — has just cancelled their project, after having had probably not the best of days.

Funding Canceled
Funding for this project was canceled by the project creator about 6 hours ago.

The creator, Cat Clark, has deleted her Kickstarter profile. And the BattBump.com site (archive) is now giving a 404 (archive).

The near-universal reaction to BattBump was incredulity at this clearly physics-defying project.

Torsten Kleinz, a journalist at c’t and Die Zeit, wrote to BattBump, and got a response:

I am a journalist from Germany and stumbled across your Kickstarter campaign. This campaign has an apparent flaw: There is no way to transfer energy between mobile phones per NFC. Even if a smartphone could harvest the NFC energy — and none in the market can — you had to hold the two phones against each other for hours to get even one percent more battery life. So — what is this campaign really about?

Thanks for showing interest in our campaign. We are developing the software for all current flagship devices to transfer energy between devices. It isn’t a question of whether a device can “harvest the NFC energy” NFC is the conduit and not the storage capability. Our software speeds up the process, and the time required is relative to how much of your battery charge you are willing to give away. Thanks for your question and we hope to have your continued support.

Dave Jones, of gadget/hacker/maker video channel EEVblog, did a video absolutely ripping the Kickstarter to pieces — but someone’s filed a spurious privacy complaint against the video:

The campaign has now been cancelled, the owner has removed her photo from the KS campaign and tried to delete the KS profile, AND I have received a ‘Privacy Complaint’ again this video. The battbump.com website is also gone. So this video might vanish in 48 hours when it gets automatically reviewed by Youtube. AFAIK there is no way I can respond to or dispute this complaint.

Dave says the creator’s name and city from 1:50 to 1:55 — but this is someone who’s just asked the general public for AUD$30,000, and that’s clearly news. He’s posted a followup video on the issue.

Dave’s taken the video private for the moment — and I’ve emailed Cat Clark asking if she knows who filed the complaint, and on what grounds.

So was this a real project?

I’m increasingly sure this was a sincere project — they just didn’t understand the technology.

Before being shut down, the project page “Risks and challenges” was updated from:

to a much more realistic:

Challenges will be to wait for the technology to be developed that allows for the battery transfer between devices and how that will be integrated easily to work with new mobile devices and flagship models.

We predict the mobile app development of Battbump will go smoothly regarding the social network body of the app.

BattBump are developing an app. The technology aspect regarding the transfer of battery would be purchased from a company/and or persons who already have developed the technology. We will not be developing this technology ourselves nor utilising any technology within the app without permission. The current funding will be used to have the shell of the app developed, ready for the technology to be integrated when and if it is available. The video and creative stills are to give a storyboard of how the app and technology would work together once it is available and once it is integrated alongside BattBump. This is our research and development phase and we thank and appreciate our backers patience and support.

A poster on the EEVblog forum says:

Someone just told me they contacted her using the web form as an “investor” and I have her response, it seems legit, she is pointing interested investors to go and back the campaign.

Cat Clark emailed a response to my initial query of Monday evening, around 04:00 UTC today:

We are looking to organize a partnership with a collaborator who will help us utilize the technology for wireless charging in the app when it it ready. We will not be developing the technology ourselves. We have researched similar patents like Sony’s and feel this kind of partnership or collaborator would be the way forward. This project is to fund the mobile application of BattBump, the next stage within the product roadmap will be further research and development of the technology to perform the battery charge transfer. Also, Genson Glier is a Blockchain technology advisor to BattBump. We are always open to new partnerships and further support for our project.

But evidently they’re thinking more deeply about this one before proceeding.

Was it really impossible?

If you’re using Qi inductive charging, the receiver is small enough to just be a loop inside the phone.

But here’s the insides of a Qi charger, in this case a Nokia DT-900: 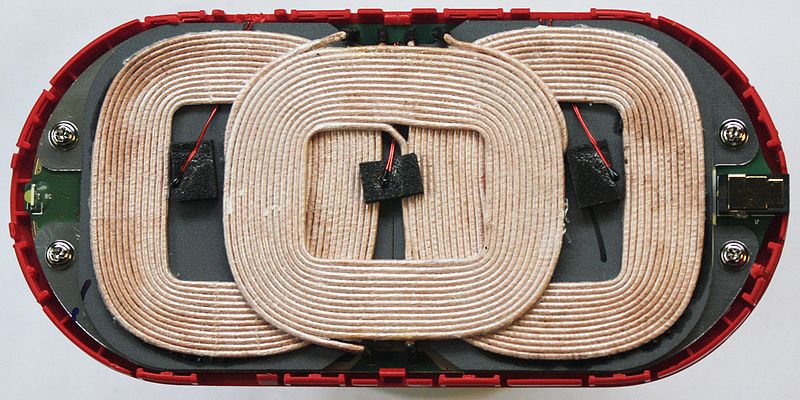 Crowdfunding tends more reality-based than your typical ICO. But — as always — pledge carefully.

12 Comments on “BattBump update — the project backs down on its claims, then cancels and vanishes”