Hydroelectric power is overbuilt in much of China. Bitcoin mining in Sichuan uses some of this oversupply, very cheaply. However, as power plants join the wider national grid, the surplus is no longer free to be wasted on calculating hashes. A small number of miners have bought their own hydroelectric plants, but it’s not the usual case.

This appears not to be sudden. A thread on 8btc from earlier today posts an image of what appears to be an internal document from the Sichuan Electric Power Corporation, dated 3 November, concerning the shutdown. The usage of “Bitcoin” in this context generally implies all cryptocurrency mining, so no, they couldn’t just quickly switch coins. (If anyone here can read Chinese and could please translate the document, it would be much appreciated …)

(SEPC has since clarified that it did not mean bitcoin mining itself was illegal, just the diversion of power to bitcoin mining.) 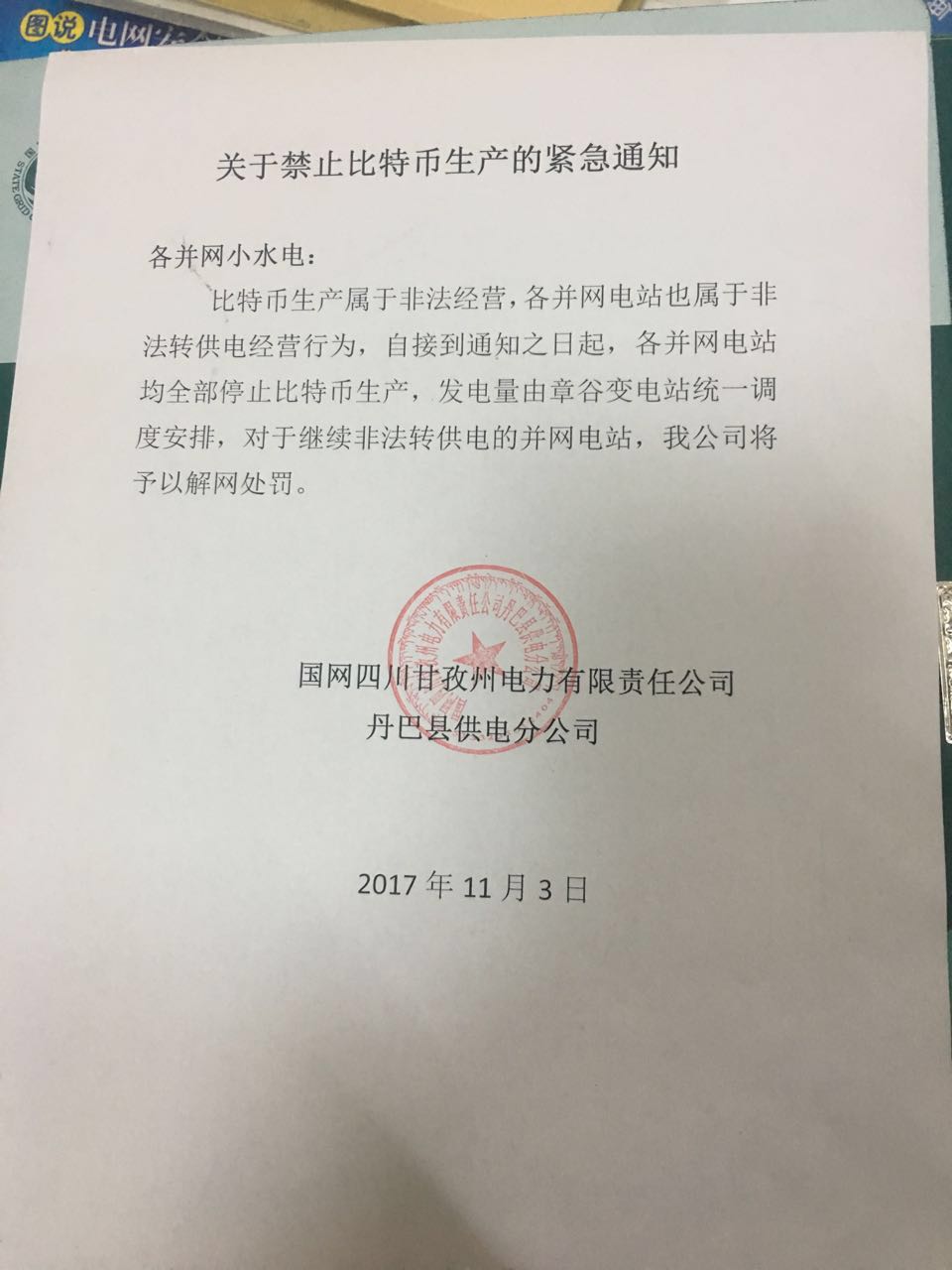 In the wake of China shutting down the cryptocurrency exchanges, some wondered what would happen if the mining dropped offline. China is still home to a supermajority of Bitcoin mining (around 80% as of July), and the miners wield considerable power.

This is not “what if all the mining disappeared suddenly?” — this won’t lead to a “frisbee on the roof” scenario, where there isn’t enough mining happening to reach the next mining difficulty adjustment (which happens every 2016 blocks, rather than after a given time). Blocks would, however, slow down considerably.

The interesting thing, however, is the ongoing battles between Bitcoin Cash (BCH) and Bitcoin (BTC), particularly in the past week — as Bitcoin Cash has been wielding mostly-Chinese miner support against Bitcoin.

Some large miners, particularly Jihan Wu, backed the Segwit2x fork, which was called off a few days ago. These seem to have joined in an effort to get mining power off BTC and onto BCH. Remember that both blockchains use the same hash — any miner can move their mining equipment from pointing at one to the other at any time.

This was helped by a large rise in the price of BCH, which quadrupled from $650 to $2500. It’s important to remember that it’s very thinly traded. Most of the activity was on South Korean exchange Bithumb and on Bitfinex, with BCH advocate Roger Ver personally buying 25,000 BTC worth (notionally about $150 million) of BCH and Ether on Bitfinex.

The “price” of BCH dropped $900 when Coinmarketcap decided to exclude Bithumb from their weighted average during an outage. Although arguably reasonable in this case, this is a form of price manipulation that’s little-discussed — when China shut down crypto exchanges a few months ago, you didn’t see the expected effects on the “price” of Bitcoin because the exchanges were promptly removed from the averages, even though they still had a couple of months of trading still to go.

BTC is very clogged at the moment, with around 100,000 unconfirmed transactions as I write this, and peaks of 160,000 a few days ago. Transaction fees peaked at around $20 just to get your transaction through. This wasn’t helped by long delays between blocks, as mining capacity moved to BCH — the time between blocks peaking at 63 minutes a few days ago, on 11 November. fork.lol, which charts the relative profitability of the two, was overloaded and inaccessible. 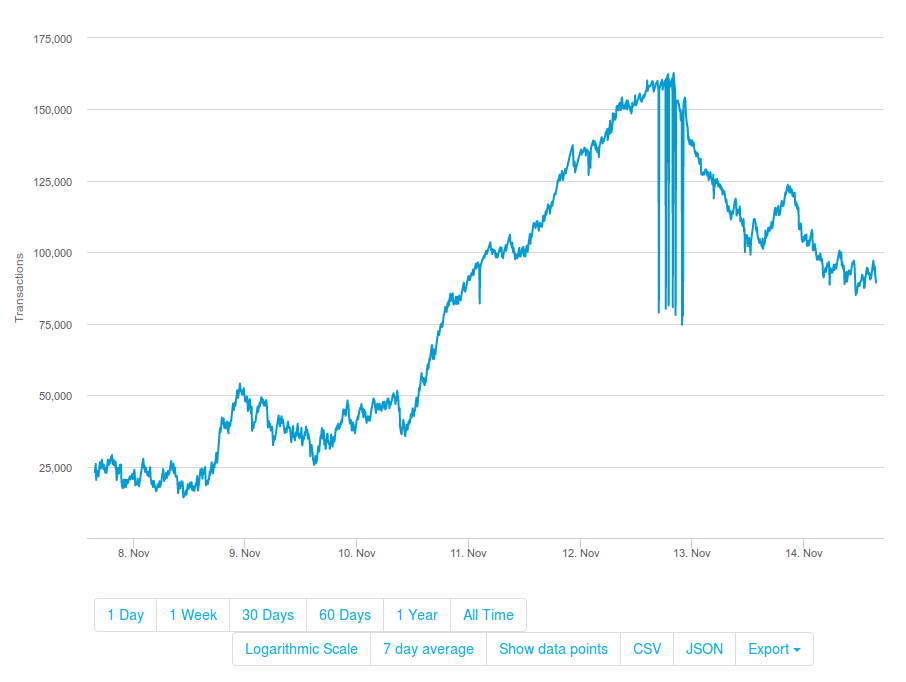 Unprocessed transactions in the BTC mempool from blockchain.info. 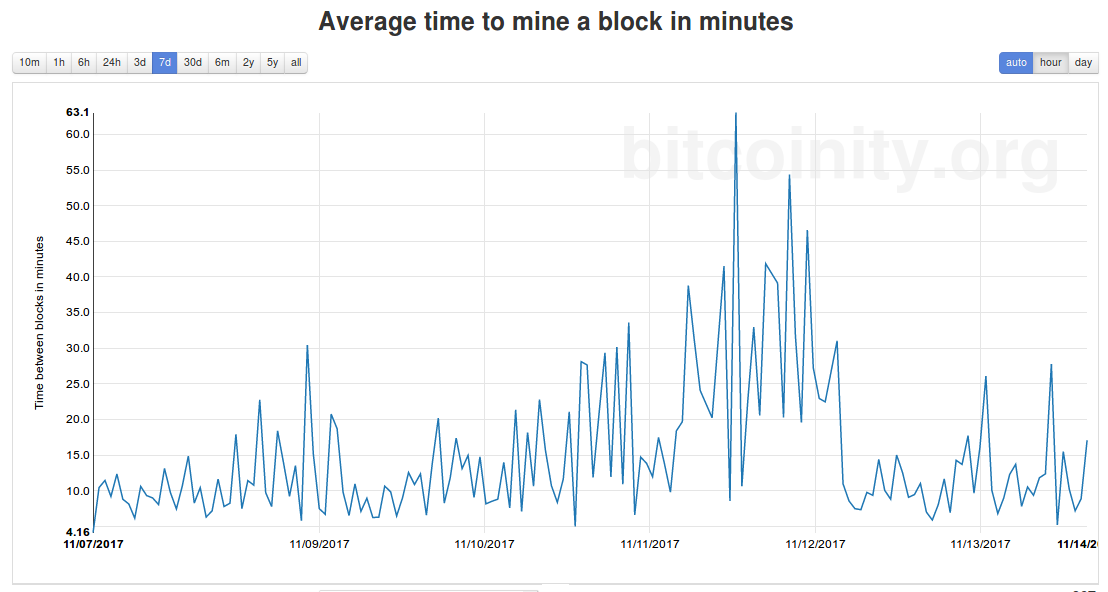 BTC mining is recovering and the transaction clog is going down again, though fees are still around $15.

BCH is a speculative vehicle; despite its ambitions to be “useful for commerce” and its larger and mostly-empty blocks, with no transaction clog, it has no merchant story at all. (Not even the darknets.) In trading terms it’s an altcoin, with very thin trading, huge spreads between exchanges and ridiculous volatility. Despite its explicit ambitions, it’s still nowhere near replacing BTC as the “main” bitcoin.

If shutdowns of mining progress in China, then whoever remains in mining will become the power. This is currently divided between Iceland, India, Japan, Georgia and the Czech Republic. I think even a large chunk of the mining disappearing is unlikely to affect the price of BTC, which is still made of exuberance and manipulation, and exchanges have happily continued during periods of blockchain unusability to trade BTC and report a price for it. BCH’s ambitions will require convincing the remaining miners that BCH is worth mining and presents a viable future for Bitcoin.

One Comment on “Chinese Bitcoin mining shutdowns; how is Bitcoin vs Bitcoin Cash affected?”