To write an ICO white paper, you must: 1. State a problem. 2. Assert that ERC-20 tokens on the Ethereum blockchain will solve it. I don’t think there are any other steps.

Synthorn (archive, archive) is selling “Synthetic Rhino Horn Aphrodisiac, Tokenized on the Ethereum blockchain.” (The site is also available in Chinese and Vietnamese.) Here’s the abstract from the Synthorn white paper (archive), which they actually did the barely five pages of in LaTeX: 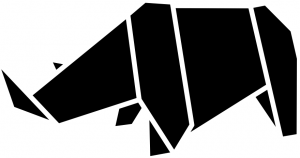 Rhino horn is much sought after for use as an aphrodisiac. However, poaching has had a devastating effect on rhino populations worldwide. To combat this, Synthorn proposes a synthetic rhino horn aphrodisiac, tokenized on the Ethereum Blockchain via an ERC20 token. This would allow pre-orders, trade and speculation. A separate sale of HORN tokens is being conducted to validate the proposed ICO.

The plan is to make synthetic rhino horn (which would just be rhino keratin), impregnated with Viagra. Or not. In any case, it should sell itself!

Rest assured they’ve accounted for the risks, i.e., that they have no idea how to make or buy synthetic rhino horn:

Although most of the inputs needed for Synthorn are easily sourced, there are few producers of biofabricated rhino horn.

Pembient, Inc. [1] is currently issuing an ICO, Pembicoin [2]. One Pembicoin token will eventually be redeemable for one gram of biofabricated rhino horn. We plan to purchase Pembicoin commensurate with the amount needed to manufacture Synthorn.

We expect Synthorn will sell itself. Market risk, although possible, is minimal.

Synthorn’s front page notes that you should “consider this a donation, as the product may not proceed to production.” There are no names or contact details for Synthorn, just an address to send ether to.

Pembient is a biotech startup that’s been trying for a while to drum up interest in synthetic rhino horn. Like many innovative entrepreneurs with a dream, they’ve noticed the ICO bubble, and Pembicoin (archive) is their contribution. “A PembiCoin is a blockchain-based token that allows its holder to take delivery of one gram of biofabricated horn in the year 2022. A PembiCoin does not represent or constitute an ownership interest or share in Pembient.”

What are the uses of rhino horn? Apparently, “Artisans, carvers, and designers want to turn biofabricated horn into durable goods.” And certainly not erection pills, no, no.

Pembient’s plan is to flood the rhino horn market with their synthetic product, crowding out real rhino horn. Actual conservation groups think this idea is terrible — it would expand consumer demand for what is already an aspirational product, it would lend credibility to the completely fraudulent claims that rhino horn has any medical effect and it would provide cover for trade in poached horns:

“Pembient is completely out of touch with the realities of wildlife trafficking, and has not once considered how harmful its product will be to law enforcement efforts on the front lines in Africa and Asia,” says Rhishja Cota-Larson, founder of the environmental pressure group Annamiticus.

Regulators aren’t happy with this either. Only Pembient and the other biotech companies who think they can make money from synthetic rhino horn think it’s in any way a good idea.

One Pembicoin will apparently deliver one gram of synthetic rhino horn in 2022, with one of the risks being “R&D problems.” Pembient were claiming in 2016 that they would have horns in two years (2018), though in 2015 they were already claiming that “Our horns are practically indistinguishable from wild horns.”

They hired a lawyer at least long enough to write something for the risks section detailing the ways in which all of this could be laughably illegal:

A PembiCoin is structured as a “prepaid forward contract” executed on an over-the-counter (OTC) basis. These facts, among others, place PembiCoins in an unclear regulatory environment. For instance, within the U.S.A., the Commodity Futures Trading Commission (CFTC) could come to view a PembiCoin as a futures contract, while the Securities and Exchange Commission (SEC) might conclude it is a security. Moreover, because PembiCoins exists on a blockchain, the Financial Crimes Enforcement Network (FinCEN) could classify us as a money transmitter. Finally, depending on how we source the stem cells we use, the Fish and Wildlife Service (FWS) might exercise control over the horn we deliver. Even if regulation is avoidable at the federal level, it may be unavoidable in various state, local, and foreign jurisdictions.

So far Synthorn has taken 0.012 ETH to date from two addresses. Pembicoin itself has taken 10.509 ETH from seven addresses. Get your ether in now!

Hat-tip to Magrov for finding this one.

8 Comments on “ICO of the day: Synthetic rhino horn erection pills, on the Blockchain”