Malte Voß interviewed me for the German magazine Jungle.World, for a cryptocurrency section in the 25 January 2018 issue: »Bei Bitcoin geht es weniger um Technologie als um Psychologie« (“Bitcoin is less about technology than psychology”); or in the print version, »Wie in Wilden Westen« (“Like in the Wild West”). 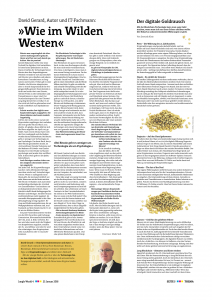 “Bitcoin is less about technology than psychology”

That the cryptocurrency bubble will burst is certain, says David Gerard, who criticizes the cry for cryptocurrency in his book Attack of the 50 Foot Blockchain: Bitcoin, Blockchain, Ethereum & Smart Contracts. He talked about the technology behind digital money, right-wing ideologies, and explains why grandmas should not buy cryptos in Jungle World.

Malte kindly sent me his transcript of my original spoken answers in English — below is what was used for the article. The German version is translated and edited, but preserved what I meant very well.

Originally Bitcoin was meant to be an alternative currency. Today it’s almost only used for speculation. What happened?

I think Satoshi Nakamoto sincerely wanted to do this nice new electronic cash system. He didn’t actually think in terms of speculation. But the technology behind bitcoin hit capacity. So really suddenly it went from being fast and almost free to use to being slow and expensive. Before there were some merchants who used it but the main use case was the black market for drugs. But today even the black markets don’t use bitcoin anymore because it’s so volatile and the transaction fees are so high. Today it’s $22 to do one transaction and that just the average. It is literally unusable as money and eventually it became this thing that people speculate on.

Recently new cryptocurrencies have been issued almost on a daily basis. The Ideas behind them are mostly questionable.

I’m not sure why the hype started up again after the first big bitcoin bubble popped in 2013. I think this time the bubble started at around April 2017. After a month the price doubled and then the media became aware of it. Bitcoin is not a technology story, it’s a psychology story. The best book ever written about Bitcoin is Extraordinary Popular Delusions and the Madness of Crowds by Charles Mackay. It’s an early study on crowd psychology and it was written in 1841. It talks about bubble manias and financial bubbles.

It totally does. With bitcoin and cryptocurrencies you see a lot of old scams come to light again. Serial scammers know that if there’s an exciting new idea that nobody understands that there’s rich pickings. Bitcoin has a whole weired ideology attached to it with “freedom from central banks” and various anarcho-capitalist ideas. That leaves people very naive and they become ideal prey for scammers and fraudsters. Also, crypto exchanges are not regulated. In normal securities or commodities markets the trading environment is regulated sensibly. There are various shenanigans and market manipulations that are banned on real securities exchanges for good reason, but are standard in crypto. It’s like the wild west.

The SEC prosecuted some Ponzi, pyramid schemes. But regulators aren’t regulating the actual exchange operations. They end up regulating the gateways to actual money. So it gets harder and harder to get your money in and out of the cryptocurrency system.

Blockchain technology is the main component of cryptocurrencies. What is a Blockchain anyway?

A blockchain is like a ledger where you’d write your transaction in and you can’t go back to erase previous ones. If you want to correct it you have to write a new line. If you do this electronically you can put cryptographic authentication on it. A bunch of transactions goes into a block and these blocks go into a chain. The idea is it’s easy and fast to check to verify all is intact and no one has altered a number, but it would be slow to change or alter it. So it’s cryptographically tamper proofed. But it wasn’t new. To maintain it is literally about wasting electricity faster than everyone else to get bitcoins as a reward, which is called mining. The more you use bitcoin the less efficient it gets — it’s using more and more electricity all the time for no reason other than people are just competing. It’s up to something like 0.1% of all the world’s electricity is used on mining bitcoins. This is literally useless. You could do all the calculations on a 2007 iPhone.

A further development of the blockchain are so-called Smart Contracts.

Smart contracts were the idea that you would code business and legal relationships into a computer program that would work without human intervention. Some people have gone further with this and hypothesised you can replace large chunks of the legal system. No lawyers, no judges, only a computer determining what happens next.

That idea doesn’t show an understanding of the legal system. The law deals not just with facts but with intent and what these facts mean, whereas computer programs just deal with facts. The worst thing about smart contracts is that they have this unchangeable immutable aspect. Your smart contract has to operate in the world. What if the world changes? What if the laws change and your smart contract operation is actually doing something which is now illegal? Computerising things is good, but if you’re going to have it like that. you’ve got to have human cutouts for it.

Are there actually any practical use cases of Blockchains beyond speculation?

Fundamentally there is no use in business for a bitcoin style blockchain that’s public and anyone can see it. No organization wants to put all its confidential information out on a public blockchain. But a private blockchain is basically a widely distributed database. So far there aren’t a lot business uses for it. You’ll see pilot programs announced, but very few announcement that someone is putting it into production.

There was a pilot project of the World Food Programme to hand out digital vouchers to refugees in Jordan.

The World Food Programme used the Ethereum blockchain. They actually built a programme that works really well. But it wasn’t succesful because they use Ethereum, but because they took the funds distribution inhouse. What they’re doing is they’re using a private version of Ethereum as the backend database of their system. Not the public Ethereum blockchain. They set it up that way, because they want to get other organizations involved. I fully support that their project works and that’s excellent for them. But I wouldn’t say it’s an example for others to emulate. There’s no use case that requires Ethereum or any sort of blockchain type software in this sort of job.

Influential crypto advocates identify themselves as anarcho-capitalist or libertarian. Are rightwing ideas just a tendency, or the very ideological foundation of Bitcoin?

It’s very clear that the ideas that went into bitcoin were very much from the libertarian right. Some people want just less government, but a lot of people are very ideologically rigid about it and go into full anarcho-capitalism, where somehow you can have property without governance of any sort. If you talk to bitcoin advocates you also hear them say things like “we’ll do without government and without central bankers!” A lot of that goes back to far right conspiracy theories about central bankers running the world, so literally antisemitic propaganda.

Retail customers can buy cryptocurrencies via credit card and classical financial institutions are trying to get into it. Is there a risk for the world economy building up through the crypto markets?

I don’t think there is yet. But that is something people fear a bit. No one cares that much if it’s just the crypto people ripping each other off but if grandma starts buying cryptos, you should start worrying. It’s a gamble, it’s not an investment. I want the bubble to end as soon as possible so that less people get hurt when it crashes. Because it’s going to crash.

2 Comments on “Jungle.World: “Bitcoin is less about technology than psychology” — original English transcript”