Call this morning from a journalist called Alex at Russia-1, the biggest TV channel in Russia. They were doing a segment on Bitcoin, given the ridiculous price, and asked if I was available. Remember, always say yes to telly! Then work out how on earth you’re going to do it.

The segment went up on the 20:00 news (Vesti). You can view the video as part of the article “Биткоин никогда не спит: в США появились первые биткоин-миллиардеры” (“Bitcoin never sleeps: the first bitcoin billionaires appear in the USA“) on their site. (Requires JavaScript, Flash and adblocker off. If you don’t have Flash, their original MP4 is here for now.) I get one sentence from 2:50 on, about how you can totally make money from crypto investing if you’re that good, though if you aren’t, you won’t. 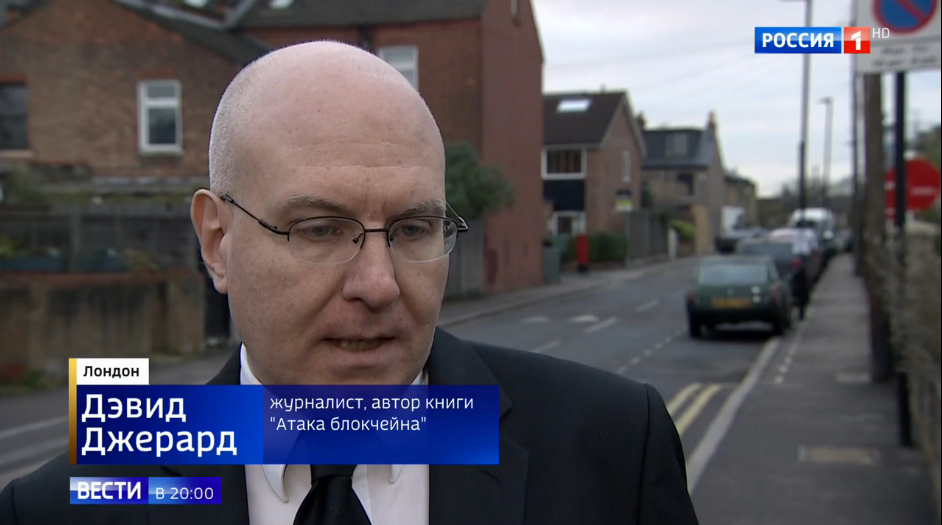 They came to my house and couldn’t find parking, so we stood on a street corner while I played serious TV pundit and my daughter stood around bored. (I figured watching how TV news videos are actually made would be educational for such a YouTube fan. “See, we try to work out where we’re going to get anything usable, then we quickly pretend we totally planned it!” “Meh.”)

We talked for about five minutes about how it’s pure speculation, there’s no basis for the price, there’s no Bitcoin economy so it’s not like investing in shares of a company, it’s the sort of highly volatile trading that verges on gambling, and how it’s not technically a Ponzi because nobody’s running it, it’s just supported a lot of Ponzis. (Alex was very familiar with Sergei Mavrodi getting out of jail and going straight back into Ponzis, this time with bitcoins.) I tried to get across, in polite finance-sounding talk, that it’s utter trash and you shouldn’t go near it.

You’ll notice the book title is rendered as “Атака блокчейна”, “Attack of the Blockchain”. An hour after recording, Alex called frantically asking how the heck to translate the book title. I explained how it was based on Attack of the 50 Foot Woman, which is a B-grade American movie most famous for its title and … we realised the book title was pretty much untranslatable. I did eventually find out that the movie had been released in Russia as Attack of the Giant Woman and called back, though evidently not in time. (No, “15 Metre Blockchain” just isn’t the same.)

This is not a problem I was expecting, though I should have reasonably foreseen something like it. So this clip, seen by some startling percentage of the Russian populace, may not turn out to have been the world’s greatest marketing push. Also, I’m pretty sure you can’t actually buy the book in Russia at all except by mail order from the US or Europe. At least it should be a hit on LibGen.

That was an okay segment, actually. They’ve talked about Winklevosses, ‘money by email’, explained how mining and transactions work, and showed two experts. I don’t know the first guy, but he also says that although there are plenty of new wallets created everyday, 80% of people just HODL and never spend a satoshi. Your bit is translated fairly well.