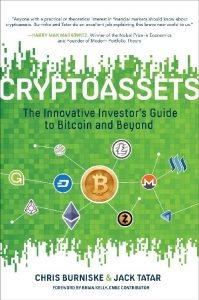 Let’s look back at a book on how to put your retirement money into this fabulous new asset class, cryptos — published in October 2017, two months before the bubble burst.

Chris Burniske is a crypto venture capitalist at Placeholder VC. Jack Tatar is a crypto investor, a former retirement investment advisor, and wrote one of the early books bigging up Bitcoin — What’s The Deal With Bitcoins? from 2013 (UK, US).

We hope to transform today’s intelligent investor into an innovative investor by providing a guide that explains what cryptoassets are, why they should be considered, and how to invest in them.

Burniske and Tatar claim to be emulating The Intelligent Investor by Benjamin Graham (UK, US) from 1949:

One of the keys to Graham’s book was always reminding the investor to focus on the inherent value of an investment without getting caught in the irrational behavior of the markets.

An intelligent investor should know what an asset bubble is. It’s when non-specialists start buying an asset they don’t understand — and that has no particular reason to have that valuation — only because they think they can always sell it for more. A game of chicken, but with your retirement savings.

Right up the front (and on the Amazon listing), there’s several pages of laudatory pull quotes from assorted crypto luminaries — every one of whom should have known better. If only I could believe any of them had the capacity for embarrassment at having encouraged this sort of nonsense.

How could Burniske and Tatar have known the Bitcoin bubble would pop just two months later? Well, they could have listened to the naysayers they spend multiple chapters trying to refute — all of whom kept pointing out that this was a completely standard asset bubble, that all bubbles pop, and it’s the retail investors who get skinned.

The book starts with a somewhat garbled potted history of Bitcoin and cryptos of variable accuracy, mixed with unclear technical explanations that will just be gibberish to the nontechnical reader.

But impressive gibberish. They use the phrase “innovative investor” a whole lot — wouldn’t you like to think you’re innovative? Totally not a nicer word for “sucker.”

This part is full of exponential graphs, and allusions to the wonders of technological change. Also, the Internet is amazing, and let’s just compare Bitcoin to it a whole lot.

When the Bitcoin price peaked two months later, and led into the Crypto Winter … did it occur to them that, maybe, the existence of technological change was not — in empirical testing against harsh reality — a good predictor of “number go up?” I bet it didn’t.

The spurious claims from authority — to try to show all this wasn’t the nonsense it promptly proved itself to be — have aged particularly badly. Here’s a sample of the standards of evidence that went into the book:

However, to truly understand Bitcoin, one has to move beyond thinking of it as some digital Ponzi scheme or shadowy system used by criminals. Those are stale stories that continue to tumble through the media mill. In July 2016, researchers from the London School of Economics and Political Science, Deutsche Bundesbank (Germany’s central bank), and the University of Wisconsin at Madison released the paper “The Evolution of the Bitcoin Economy.” Three reputable institutions would not waste their time, nor jeopardize their reputations, on a nefarious currency with no growth potential.

Totally not a bubble — just look at the university names!

Chapter 6 is particularly odious. Tatar writes at length of his work for retail investors on their retirement portfolios — and directly advocates cryptos to retirees. There is no aspect of this that is not reprehensible.

Chapter 7 is all about bigging up Bitcoin as “The Most Compelling Alternative Asset of the Twenty-First Century.” There’s a lot of comparison to graphs of Facebook and Amazon stock prices, and reasoning from first principles.

The key takeaway here is that none of this section predicted the next two months, let alone the next two years — and the authors should have known it wouldn’t have. Because this was really obviously a bubble, and bubbles burst!

Even the reasoning from first principles is spurious. Nothing in this section addresses the nature of Bitcoin, its lack of any use case other than speculation, that trading is zero-sum — nor that most of the retail buyers they’re targeting would be unable to cash out at anything like “market cap,” or “network value” as the authors keep describing it as if this is in any way a useful number with predictive power.

Chapter 10 talks about speculation, and how great speculators are. They’re the innovators, you see. Wouldn’t you like to be cool like them? Surely you won’t lose your money two months later.

The 17th century Tulip Mania is mentioned. “It should be clear to the innovative investor that the delusion of value here was created by the frenzy of a crowd … It was the common people, less experienced in investing, that had been swept up in the madness of the crowd who were the hardest hit.” These are the two least self-aware sentences in this book.

Chapter 11 is keen to tell you that Bitcoin is not a Ponzi. It quotes the World Bank on this: “Contrary to a widely-held opinion, Bitcoin is not a deliberate Ponzi.” There’s that inconvenient word “deliberate,” but they ignore that bit — and that Bitcoin may not technically be a Ponzi, but the flow of cash works like one anyway.

The last section of the book is technical detail on how to get yourself into as much trouble as possible, as quickly as possible — treat any metrics as real and not fudged, treat white papers as prospectuses rather than tissues of lies to part you from your ether, and treat the community as being real and not a bot army unleashed on social media to create the illusion of participation. All the stuff we know damn well the crypto space has been saturated with since you could first readily exchange actual money for bitcoins.

Chapter 17 recommends to retail investors, in October 2017, that they should get into ICOs. They’re such an exciting new form of startup funding, you know.

Burniske and Tatar published this book in the throes of a manic asset bubble, explicitly encouraging naive retail investors — retirees — to throw their savings into the bubble. This book is not a work of malice — but it is grossly irresponsible, culpable negligence. They had no excuse not to know better at the time, and everyone involved should be ashamed.