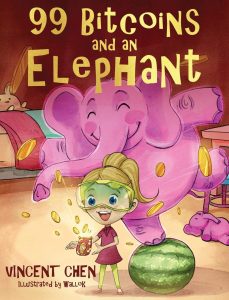 99 Bitcoins and an Elephant is a book for children — all about the world in the year 2028, a land of augmented-reality glasses and bitcoins for all!

It’s not intended as a satire of the present in the form of a children’s book — the author is completely sincere, and means well. He wrote it for his own kids. He’s convinced this book will tell children — ages five and up — about the wonderful world of the future, just a decade away!

Lisa is seven. In 2028, nobody uses paper money or coins — everyone has a digital wallet, that uses QR codes.

Everyone wears augmented-reality glasses from early childhood, everywhere, all the time — instead of a phone or a computer. These make the world much shinier!

Then Lisa’s glasses break, and you see the non-augmented world of terrible, broken trash that all these shiny augmented people are really living in — as if from My First William Gibson: 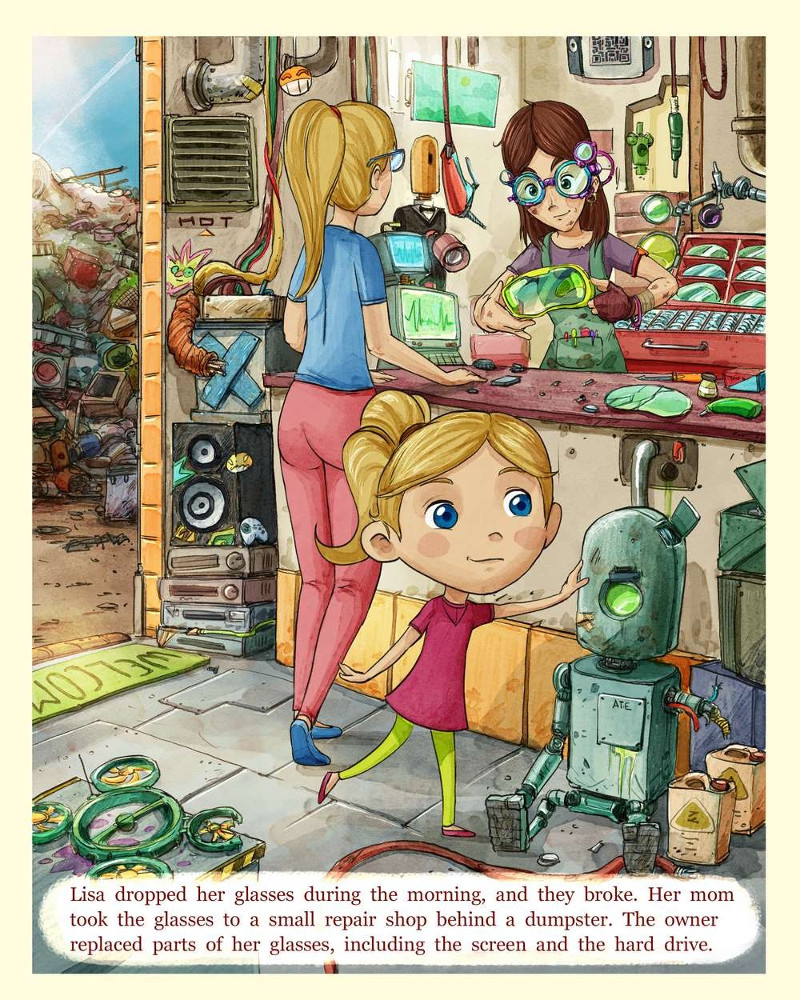 The squalid repair shop, behind the garbage heap, repairs Lisa’s glasses — and accidentally puts 99 bitcoins on them!

She uses some of the bitcoin to buy a toy elephant. She takes a picture of it, and it comes to life as an animation!

The first thing the elephant does is to get her to buy it a necklace — a Monero logo on a chain. Then it disappears.

The elephant is straight out of Charles Stross’s Accelerando (UK, US). I was honestly wondering if it was an Accelerando-style automated 419 scam program, there to show the horrible things that can happen if you let yourself get social-engineered. “I’m from the darknets, and I’m here to skin you.”

99 Bitcoins and an Elephant is a fully-worked example of Silicon Valley tunnel vision — in which a well-off techie paints a picture of an astounding new world, and completely fails to register that his favourite bits are going to be varying degrees of hell for everyone who isn’t just like him.

The author came from a poor background, and still doesn’t seem to realise what he’s created here. I’m wondering if the illustrator did, though.

If you’re still curious, the book’s on Kindle Unlimited. It is very well illustrated.

It’s not the book it thinks it is. High-quality children’s cartoons of a dark cyberpunk world, where bitcoiners’ dreams of the grim meathook post-apocalyptic Mad Max petrolpunk future have come true.

2 Comments on “Vincent Chen and Wallok: 99 Bitcoins and an Elephant — warn your children about the grim cyberpunk future”